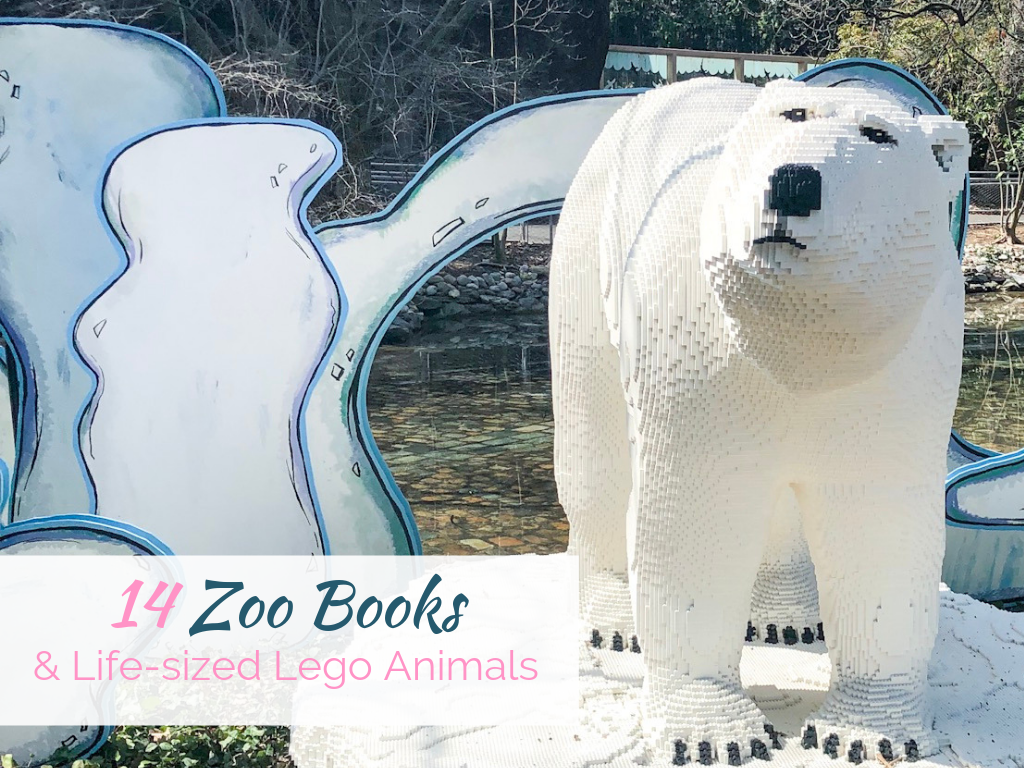 Before we get into our list of zoo books for kids, allow me to take a little trip down memory lane. Back in my life before motherhood, I worked in the marketing department at Philadelphia Zoo. I loved every minute of my job, but my favorite part was working on seasonal programming. The very first project I was instrumental in bringing to the Zoo was Creatures of Habitat: a Gazillion-Piece Animal Adventure. It was so fun to work with the Zoo team and artist Sean Kenney to produce the COOLEST animal exhibits made entirely of Lego bricks. After 10 years of being tucked away, they have re-launched the exhibit with 2 additional sculptures.

In honor of this momentous occasion, we’ve compiled a list of our favorite Zoo books for kids. These are books that we own and cherish in our own homes. But before we get into the list, I’m also going to recap the exhibit highlights and share a few of my favorite photos. If you want to go straight to the list of Zoo books for kids, click here.

This post contains affiliate links. Purchases made through links will result in a small commission to us at no cost to you.

Creatures of Habitat at Philadelphia Zoo 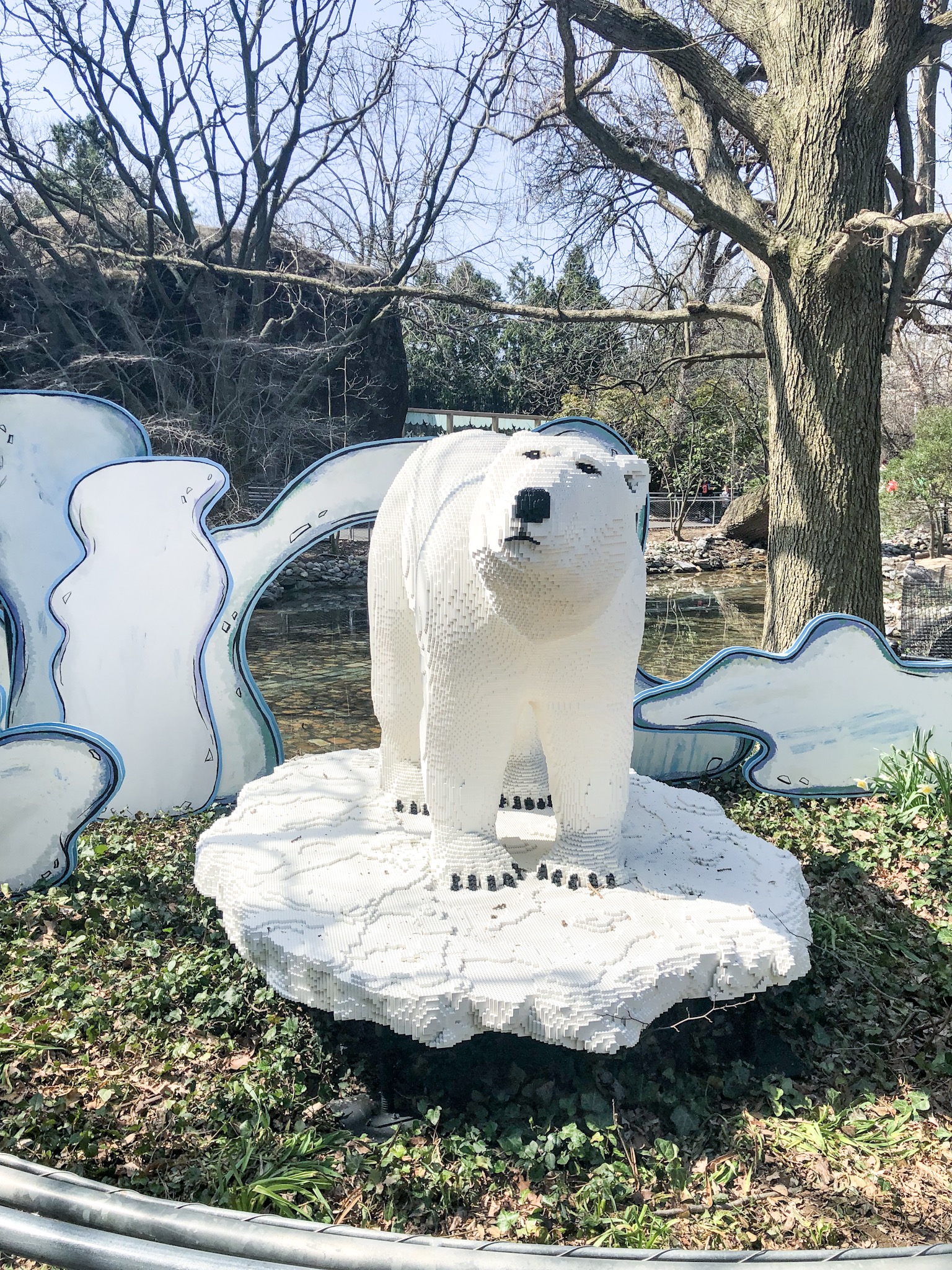 Creatures of Habitat is back at Philadelphia Zoo!! The stunning lego brick sculptures are life-sized depictions of some of the Zoo’s most beloved animals. These creatures are made entirely of Lego and built by the famed artist (and author) Sean Kenney. 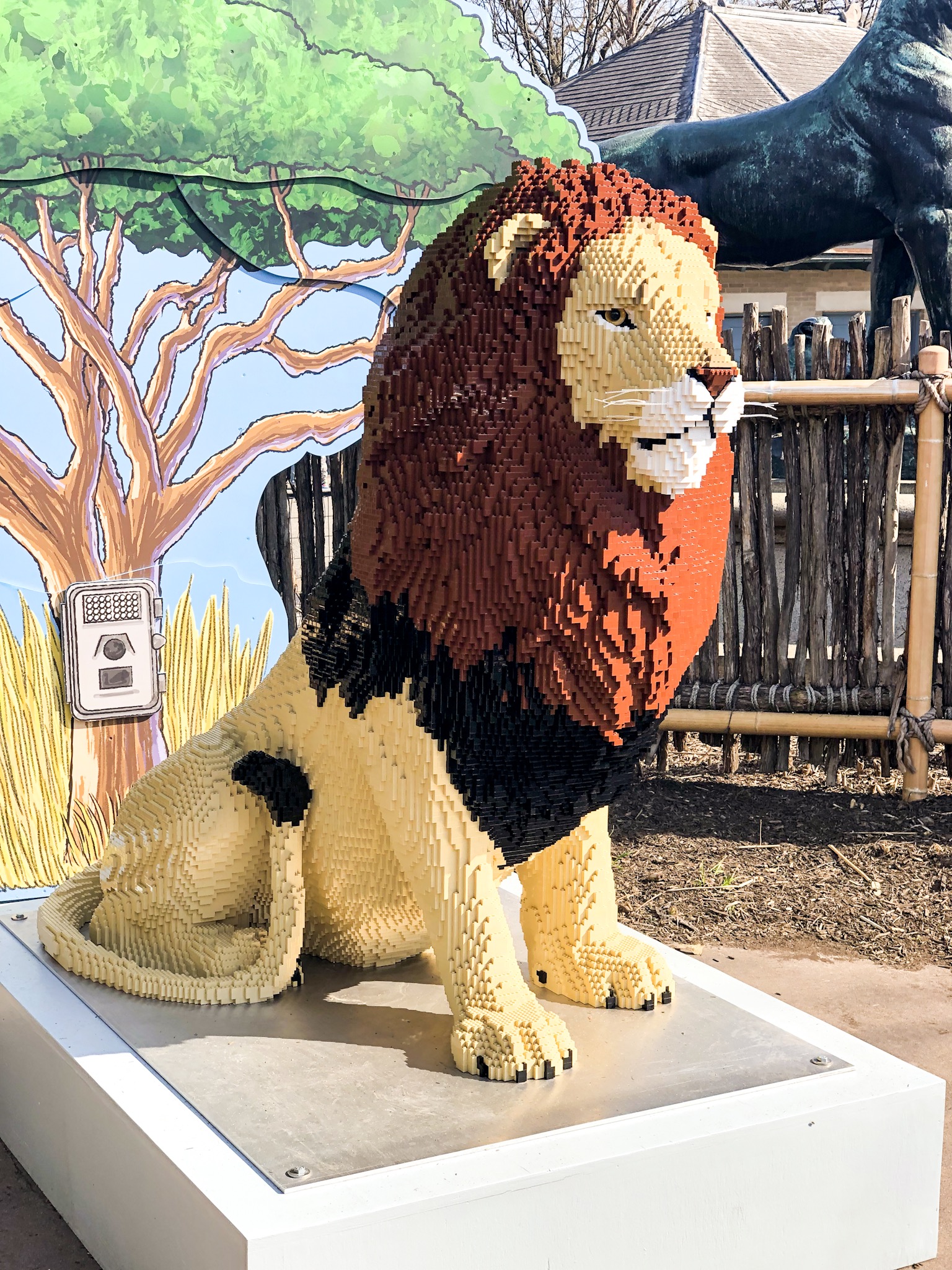 The 90,000 lego brick Polar Bear was originally the largest animal in the exhibit,  but the new Lego Lion looks like it could be giving it a run for its’ money. 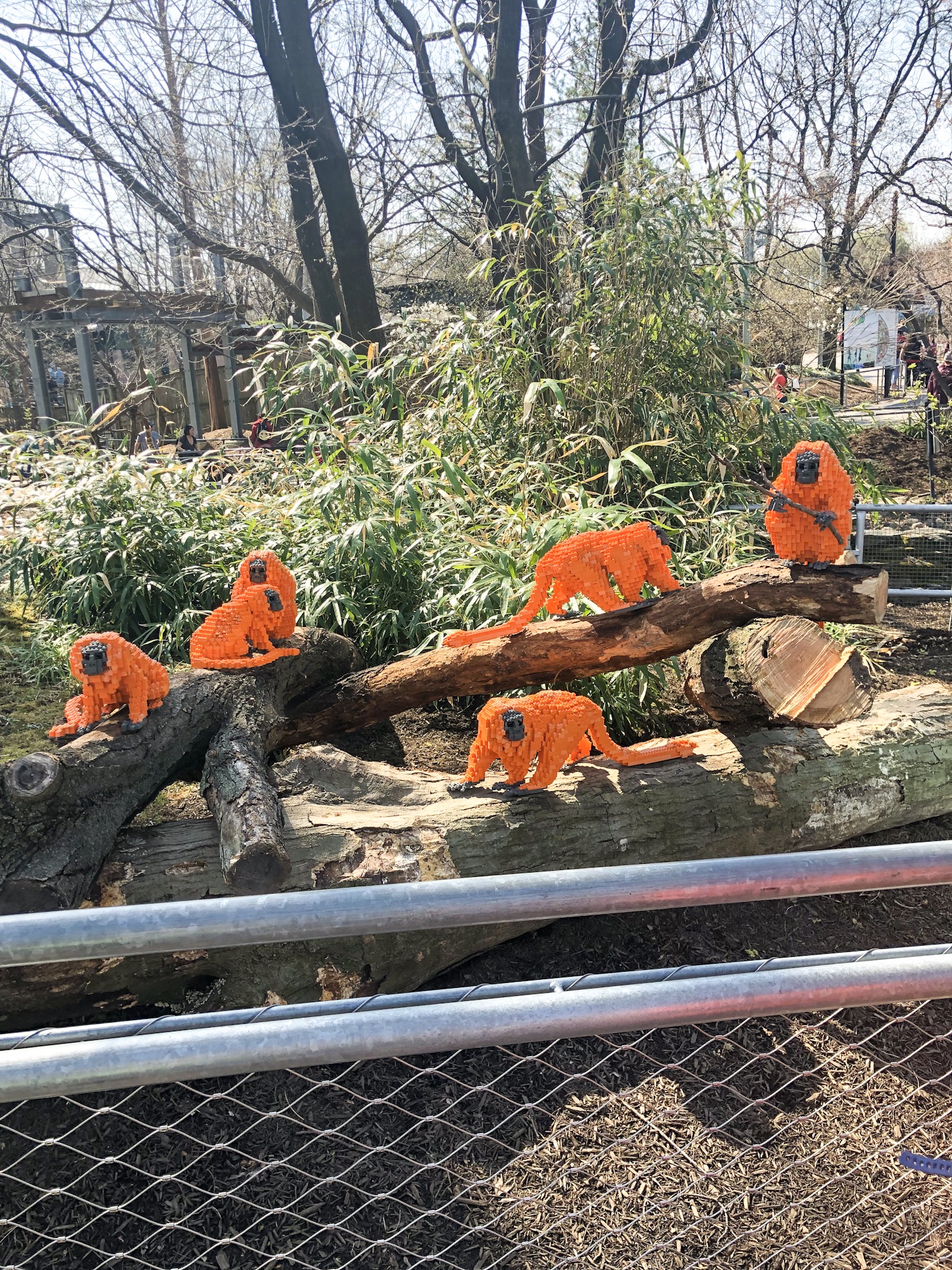 Each sculpture depicts an animal in need and the accompanying ZooKey boxes help inform visitors about the animals and what they can do to help. 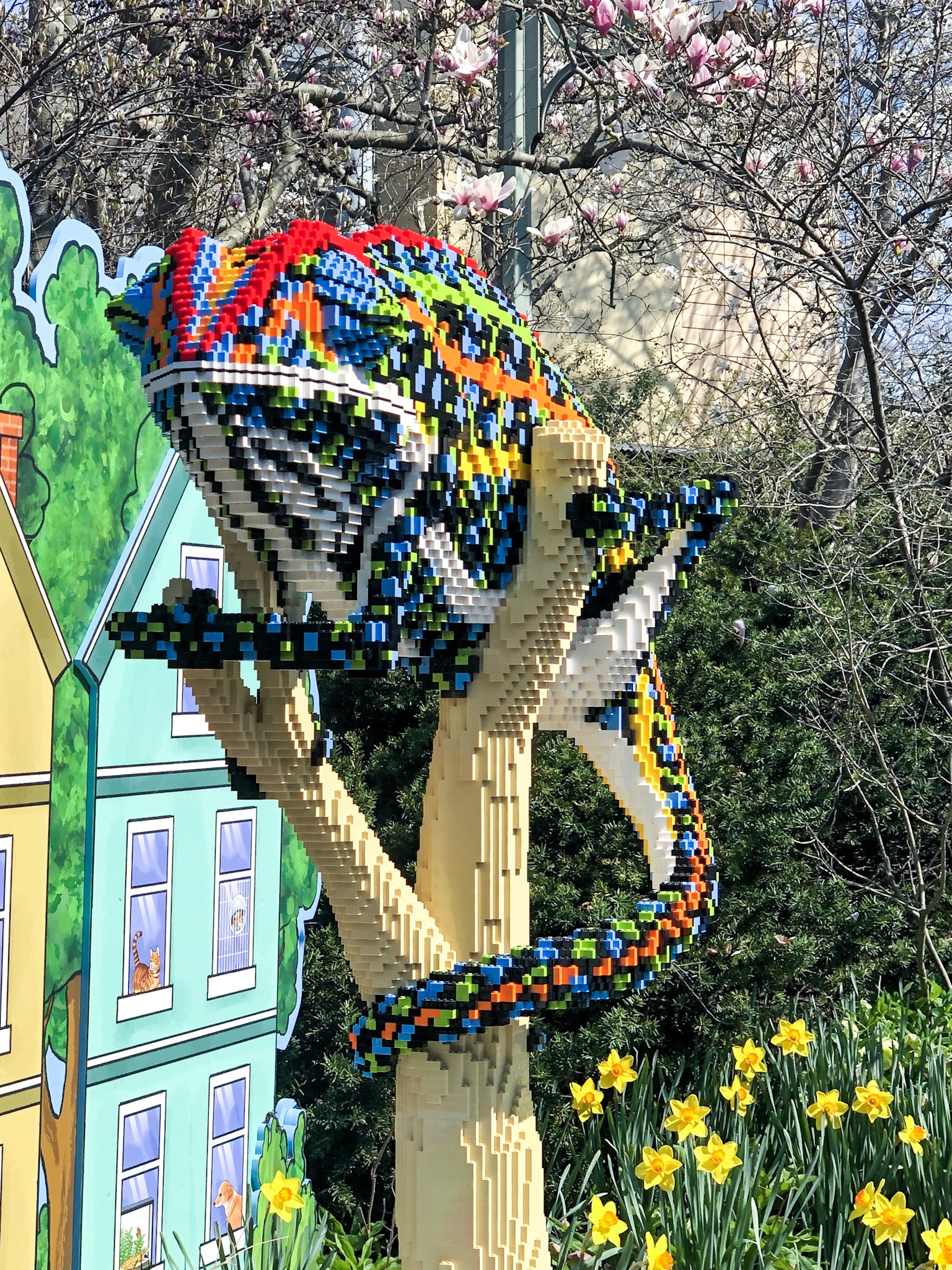 The sculptures are scattered throughout the Zoo, but they are easily found on the Zoo map. You don’t even have to go looking for them since the majority of the pieces are located in popular destinations you’d be visiting anyway. 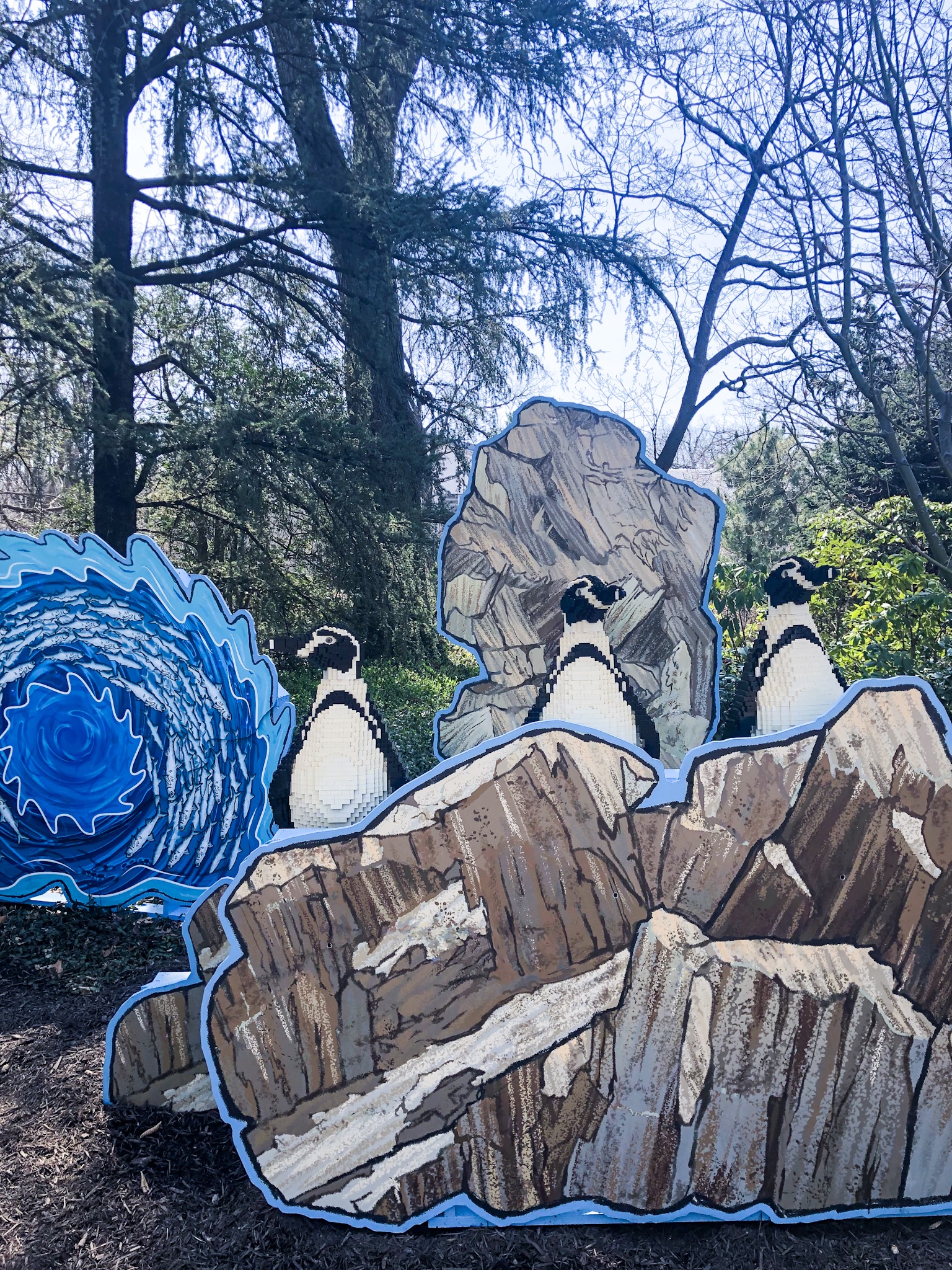 The best part is that the exhibit is free with admission and ZooKeys are only $3 each. (Can I recommend you buy one per kid? TRUST ME on this one.) Also, I’ve been told that if you have any original ZooKeys they still work!!

Zoo Books for Kids and Babies

A Sick Day for Amos McGee by Philip C. Stead

“The Best Sick Day Ever and the animals in the zoo feature in this striking picture book debut.
Friends come in all sorts of shapes and sizes. In Amos McGee’s case, all sorts of species, too! Every day he spends a little bit of time with each of his friends at the zoo, running races with the tortoise, keeping the shy penguin company, and even reading bedtime stories to the owl. But when Amos is too sick to make it to the zoo, his animal friends decide it’s time they returned the favor.”

Rod Campbell’s classic lift-the-flap book Dear Zoo has been a firm favorite with toddlers and parents alike ever since it was first published in 1982.

Young readers love lifting the flaps to discover the animals the zoo has sent—a monkey, a lion, and even an elephant! But will they ever find the perfect pet?

With bright, bold artwork, a catchy refrain, and a whole host of favorite animals, Dear Zoo is a must for every child’s bookshelf.

It’s bedtime at the zoo, and all the animals are going to sleep. Or are they? Who’s that short, furry guy with the keys in his hand and the mischievous grin?

Sneak along behind the zookeeper’s back and see who gets the last laugh in this riotous good-night romp.

The new generous trim size of every toddler’s favorite book is even easier to share. With a warm, funny author’s note highlighting how much this book has meant to kids and families since it was first published and some clever new details hidden in the illustrations, Good Night, Gorilla is the perfect gift for new babies as well as fans young and old.

Polar Bear, Polar Bear What Do You Hear? by Bill Martin Jr.

What will you hear when you read this book to a preschool child?

Children will chant the rhythmic words. They’ll make the sounds the animals make. And they’ll pretend to be the zoo animals featured in the book– look at the last page!

Bill Martin Jr. and Eric Carle are two of the most respected names in children’s education and children’s illustrations. This collaboration, their first since the classic Brown Bear, Brown Bear, What Do You See? (published more than thirty years ago and still a best-seller) shows two masters at their best.

A howling wolf, a stalking tiger, a playful panda, a dancing bird – pairing the stunning photography of National Geographic photographer Joel Sartore with the delicate poetry of Newbery award-winning author Kwame Alexander, this lush picture book celebrates the beauty, diversity, and fragility of the animal world.

When a circus ship runs aground off the coast of Maine, the poor animals are left on their own, but they soon win over the wary townspeople with their kind, courageous ways. So well do the critters blend in that when the greedy circus owner returns to claim them, villagers of all species conspire to outsmart the bloated blowhard. With buoyant rhymes and brilliantly caricatured illustrations evoking the early nineteenth century, Chris Van Dusen presents a hugely entertaining tale about the bonds of community?—?and a hidden-pictures spread for eagle-eyed readers of all ages.

In the zoo there are all kinds of animal families. But Tango’s family is not like any of the others. Find out why in this book suitable for preschool to grade three.

Finding Winnie: The True Story of the World’s Most Famous Bear by Lindsay Mattick

In 1914, Harry Colebourn, a veterinarian on his way to tend horses in World War I, followed his heart and rescued a baby bear. He named her Winnie, after his hometown of Winnipeg, and he took the bear to war.

And finally to the London Zoo, where Winnie made another new friend: a real boy named Christopher Robin.

Before Winnie-the-Pooh, there was a real bear named Winnie. And she was a girl!

Mitford at the Hollywood Zoo by Donald Robertson

Mitford is a giraffe.
But not your everyday, live-on-the-savannah giraffe.

Mitford lives in the city.
But not your everyday, filled-with-people city.

This city is filled with animals.
Animals who like to dress up,
especially the animals who work at COVER magazine.

Mitford would do ANYTHING to work there.
But first Mitford must prove himself.

Can Mitford survive the Fashion Zoo?!

Calling all animal enthusiasts—the ZooBorns are back! It’s time to scamper through the alphabet with a herd of irresistible zoo babies. Featuring adorable animal photos, zippy text, and a fact-filled glossary, this just might be the cutest ABC book ever to hit the shelves!

Koko the gorilla uses sign language to talk to her handlers. When she
asks for a pet, her handlers search high and low for the perfect companion.

The zoo is closing!

Ellie and her friends want to save their home, but Ellie’s just a baby elephant, and she doesn’t know what she can do to help.

While the other animals are busy working, Ellie finds a brush and some paints, and gives the zoo a big splash of color! Will her bright new talent be enough to keep the zoo’s gates open for good?

It’s a great day to go to the zoo! As her family hustles to get out the door, Little T lags behind. She’s afraid to go back to the zoo; the only trouble is, she can’t remember why. As an ingenious solution to help her remember, her mom, dad, and sister construct homemade costumes and act out zoo animals—in alphabetical order, no less! The costumes and scenes grow increasingly elaborate and breathtakingly creative. An umbrella and bubble wrap magically transform into a jellyfish, bath towels and a can of soda become a parrot, and many, many more. At the end of the day, Little T has conquered her fear and no longer feels like a “fraidyzoo.”
In this charming, witty picture book debut, Thyra Heder honors the bravery it takes to face your fears, and the loving people who help you do so.

Wild about Books by Judy Sierra

It started the summer of 2002, when the Springfield librarian, Molly McGrew, by mistake drove her bookmobile into the zoo.

In this rollicking rhymed story, Molly introduces birds and beasts to this new something called reading. She finds the perfect book for every animal—tall books for giraffes, tiny ones for crickets. “She even found waterproof books for the otter, who never went swimming without Harry Potter.” In no time at all, Molly has them “forsaking their niches, their nests, and their nooks,” going “wild, simply wild, about wonderful books.” Judy Sierra’s funny animal tale coupled with Marc Brown’s lush, fanciful paintings will have the same effect on young Homo sapiens. Altogether, it’s more fun than a barrel of monkeys!

We would be remiss if we wrote a post about zoo books ad we left out this book.  It is such a wonderful book, you could even read it to your little ones who are not able to read this to themselves.

One and Only Ivan by Katherine Applegate

Winner of the Newbery Medal and a #1 New York Times bestseller!

This stirring and unforgettable novel from renowned author Katherine Applegate celebrates the transformative power of unexpected friendships. Inspired by the true story of a captive gorilla known as Ivan, this illustrated novel is told from the point of view of Ivan himself.

Having spent 27 years behind the glass walls of his enclosure in a shopping mall, Ivan has grown accustomed to humans watching him. He hardly ever thinks about his life in the jungle. Instead, Ivan occupies himself with television, his friends Stella and Bob, and painting. But when he meets Ruby, a baby elephant taken from the wild, he is forced to see their home, and his art, through new eyes. 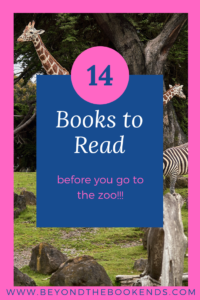 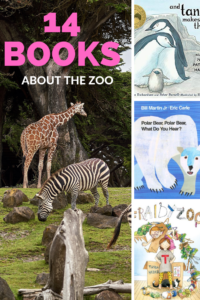 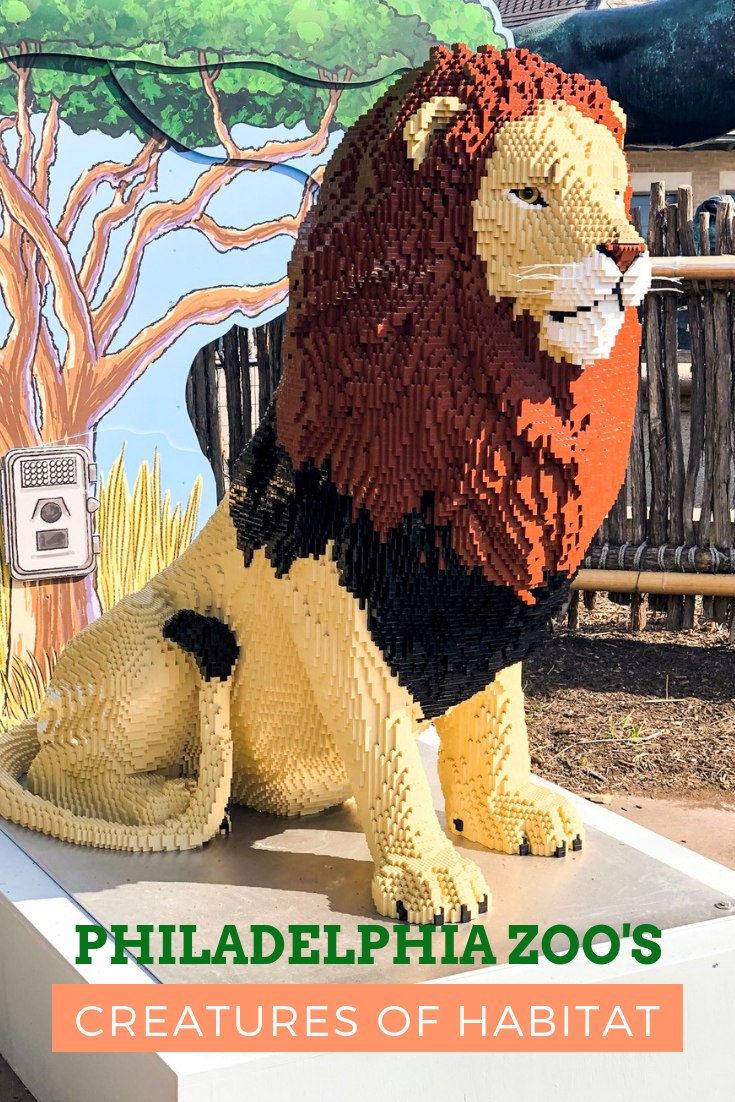 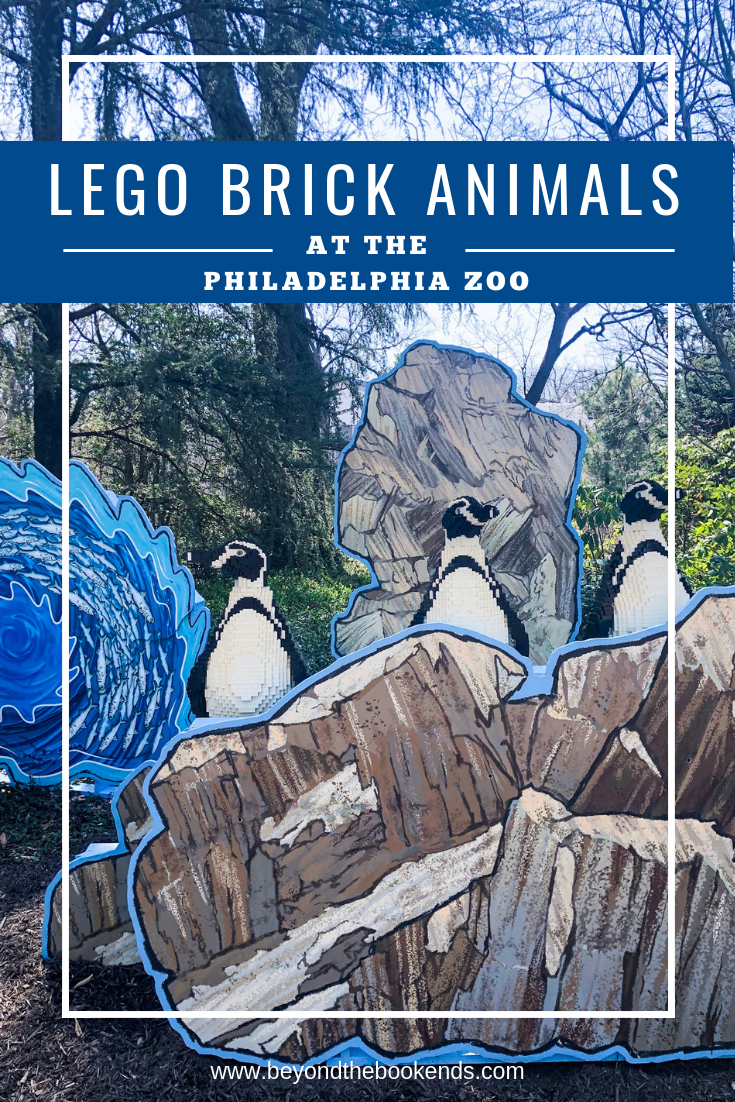 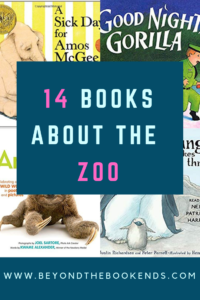 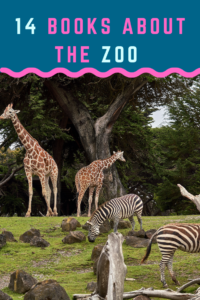 What Zoo books for kids did we miss? Have any recommendations for us?