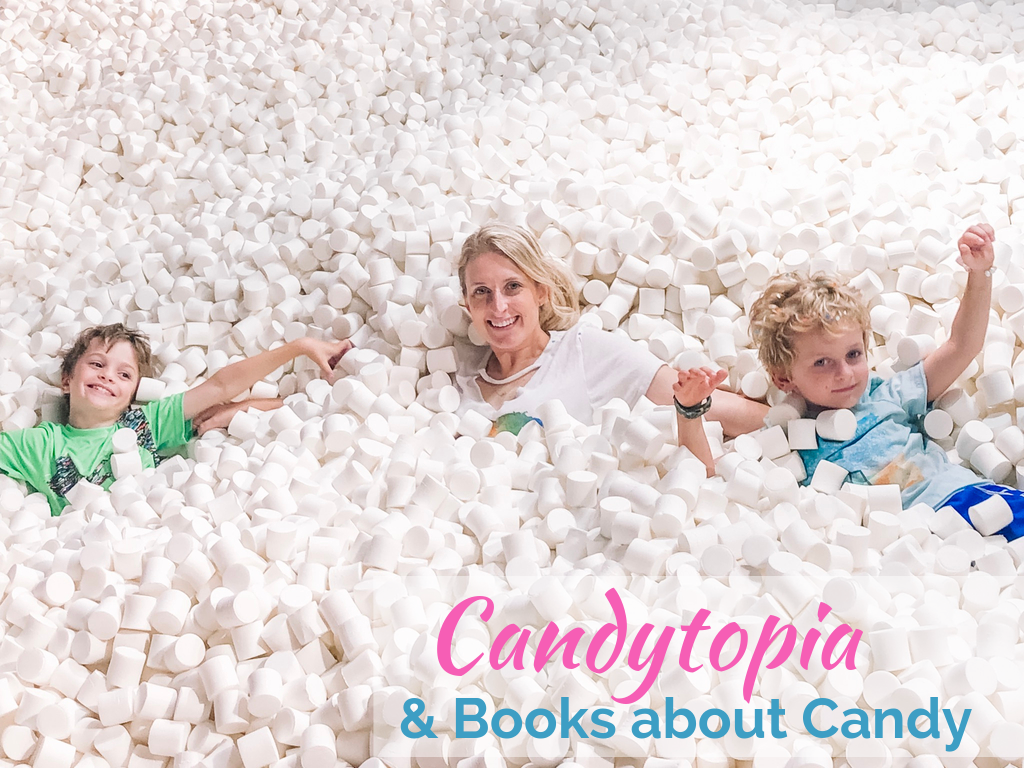 It’s October and what screams October more than CANDY!!! Here in Philly, Candytopia has opened so we wanted to give you a full rundown of the experience. Since it’s a traveling exhibit, you’ll be able to get an idea of what’s to come even if you don’t live locally. We wanted to sweeten the blog post even more (I can’t help myself sometimes) by including a list of some fantastic books about candy and chocolate. I knew I was going to be taking my kids to see this exhibit a few weeks in advance, so I read my kids The Candymakers by Wendy Maas. They loved how the book connected with the adventure, so we wanted to be able to offer you some reading recommendations too. So get your sweet tooth ready and lets dive right in. 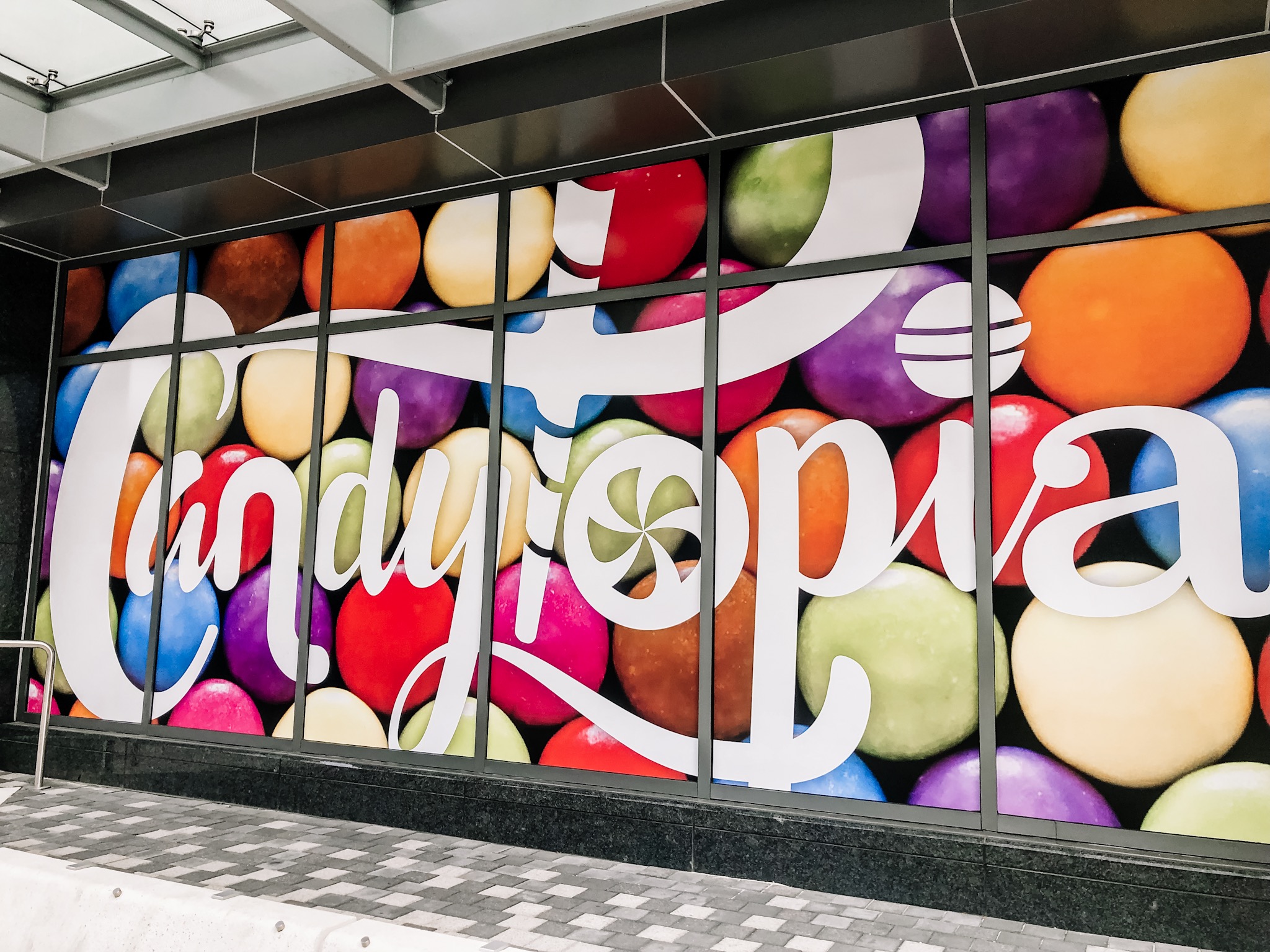 On a recent day when school was closed, I decided to take my boys for an adventure to Candytopia in downtown Philadelphia. Candytopia is a temporary exhibit currently in town until January, after which the exhibit will arrive in a new metropolis. The exhibit is comprised of about 7 or 8 rooms with various candy sculptures and a series of fun tunnels and passages to get you from one room to another. 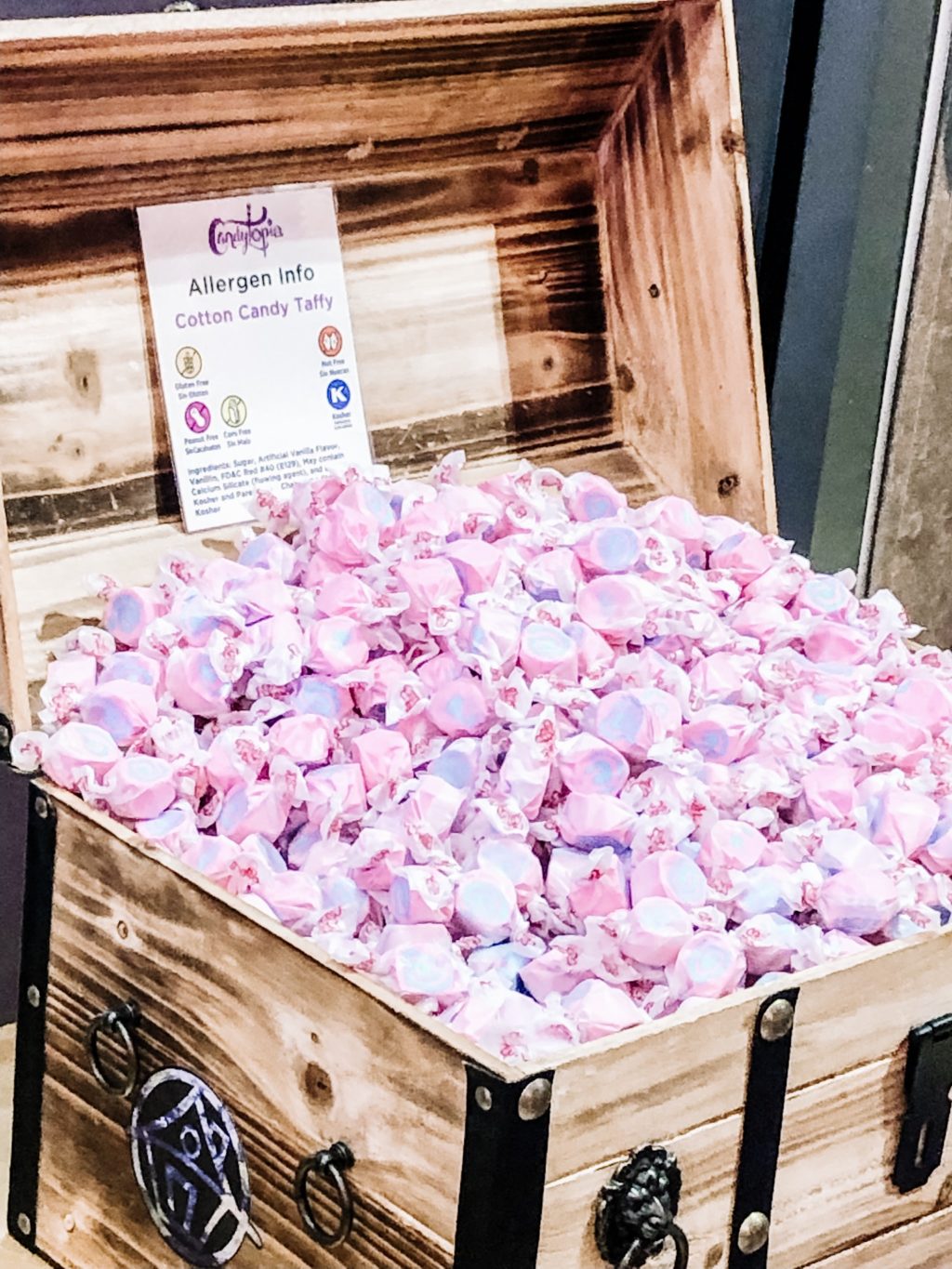 There is free candy in each room too. Easily the most important part of the exhibit! I’ve included the photo above to showcase how Candytopia deals with food allergies. I was really impressed with how careful they were. In fact, the entire exhibit is tree nut and peanut free! 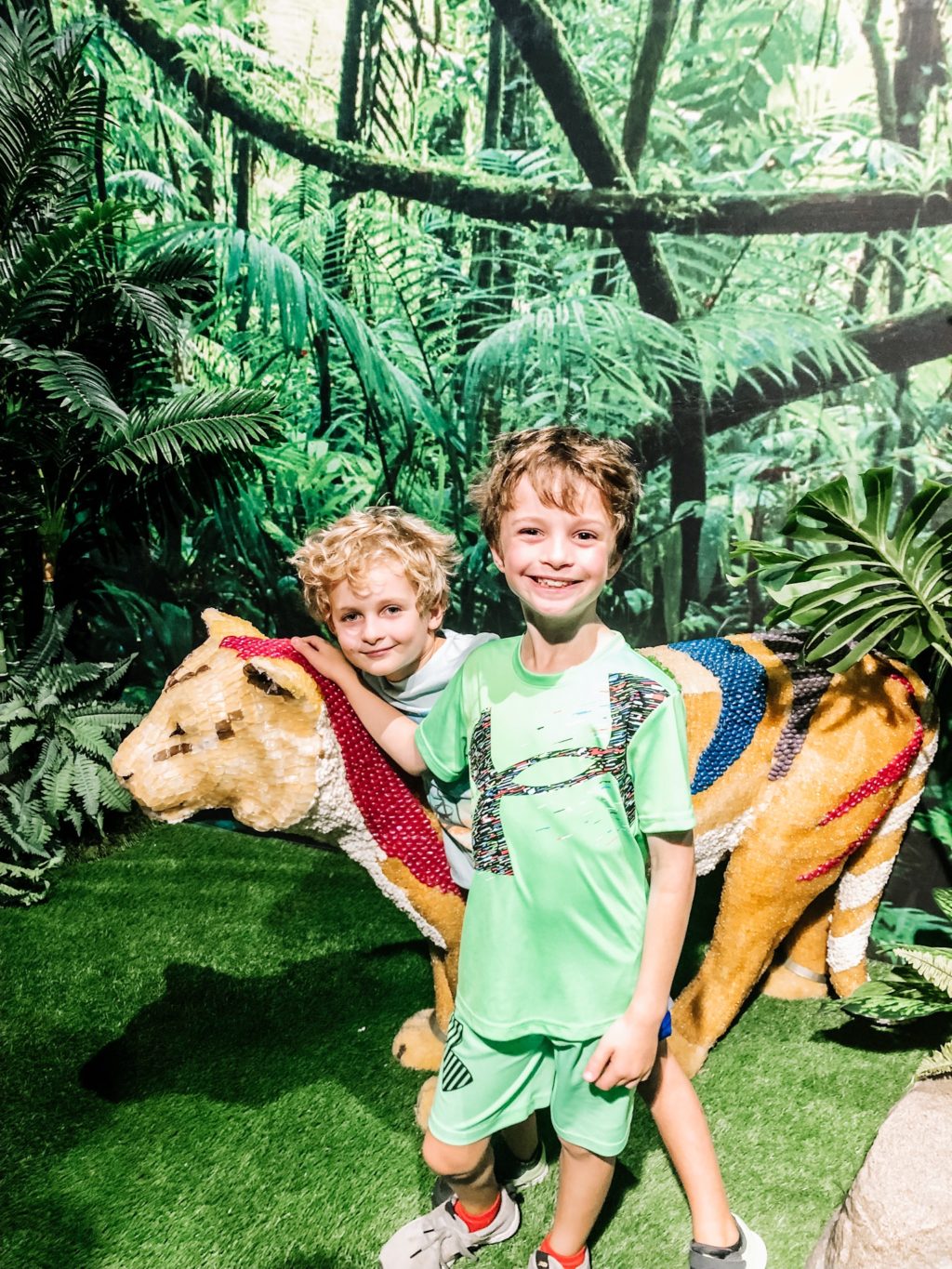 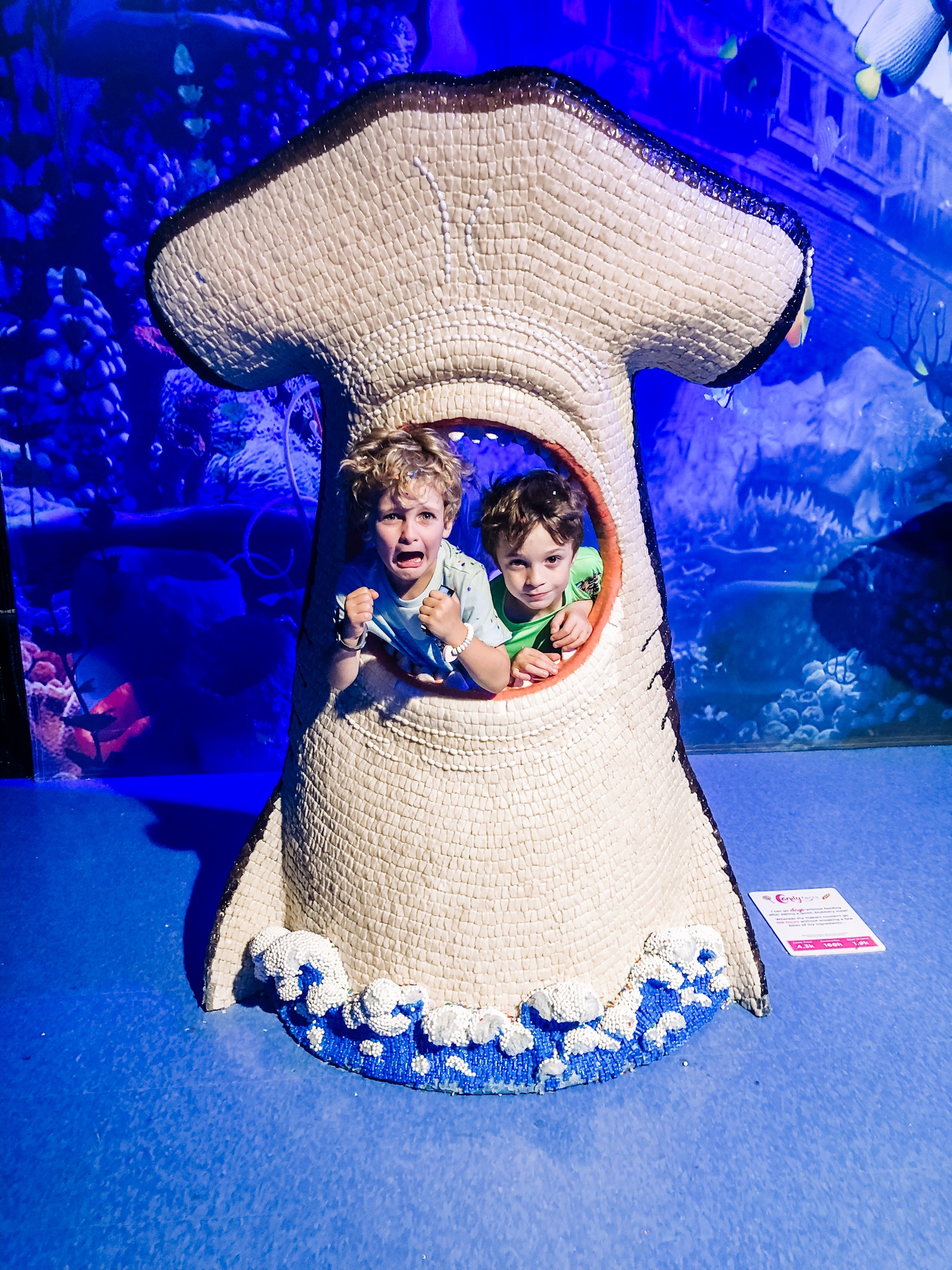 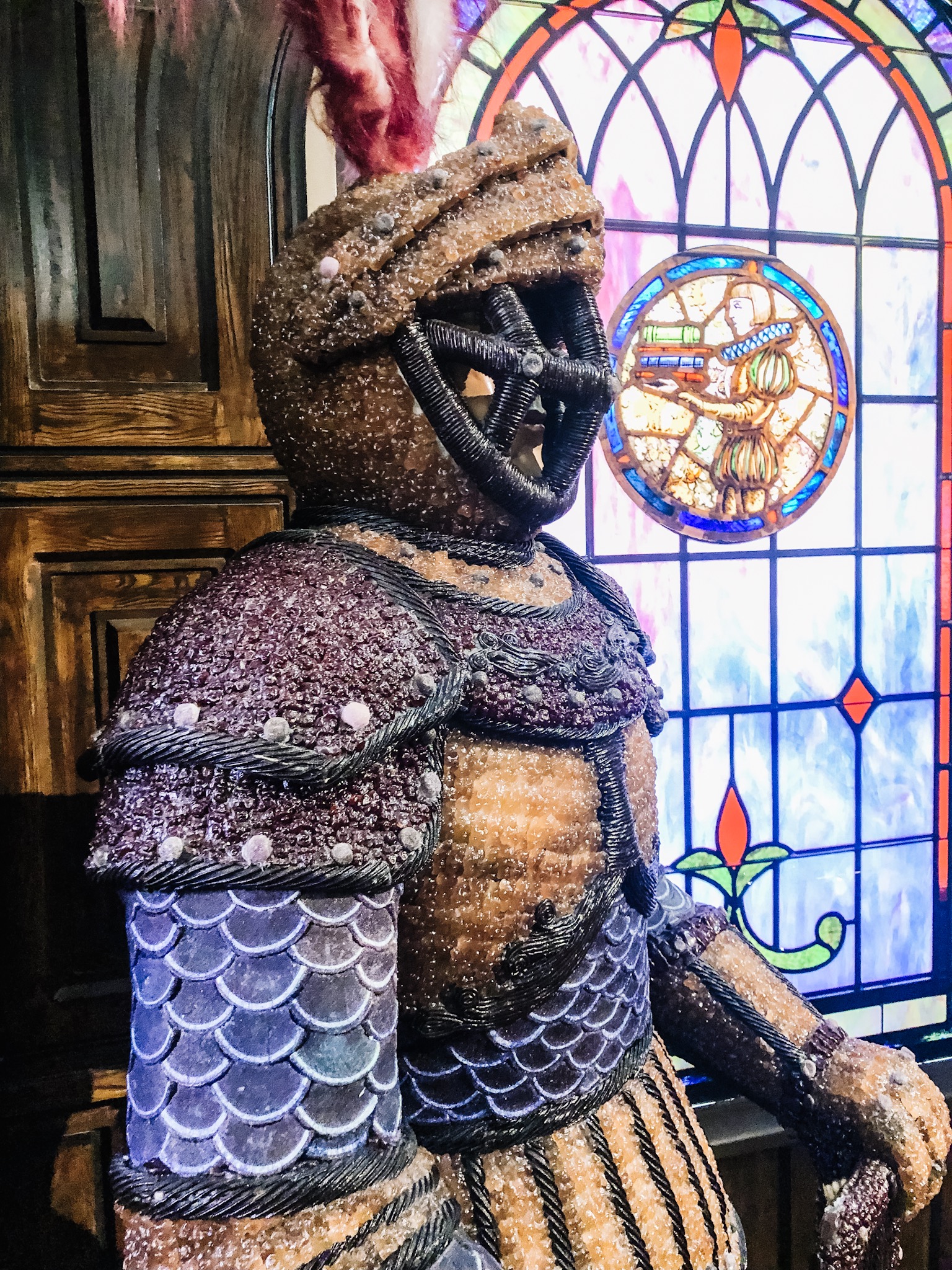 Each of the rooms had a unique theme – above are shots of the jungle, steampunk, and ocean rooms. Each sculpture is made up of TONS of candy and there are normally signs nearby that explain facts like; what kinds of candy, how much, and how many hours it took to build. 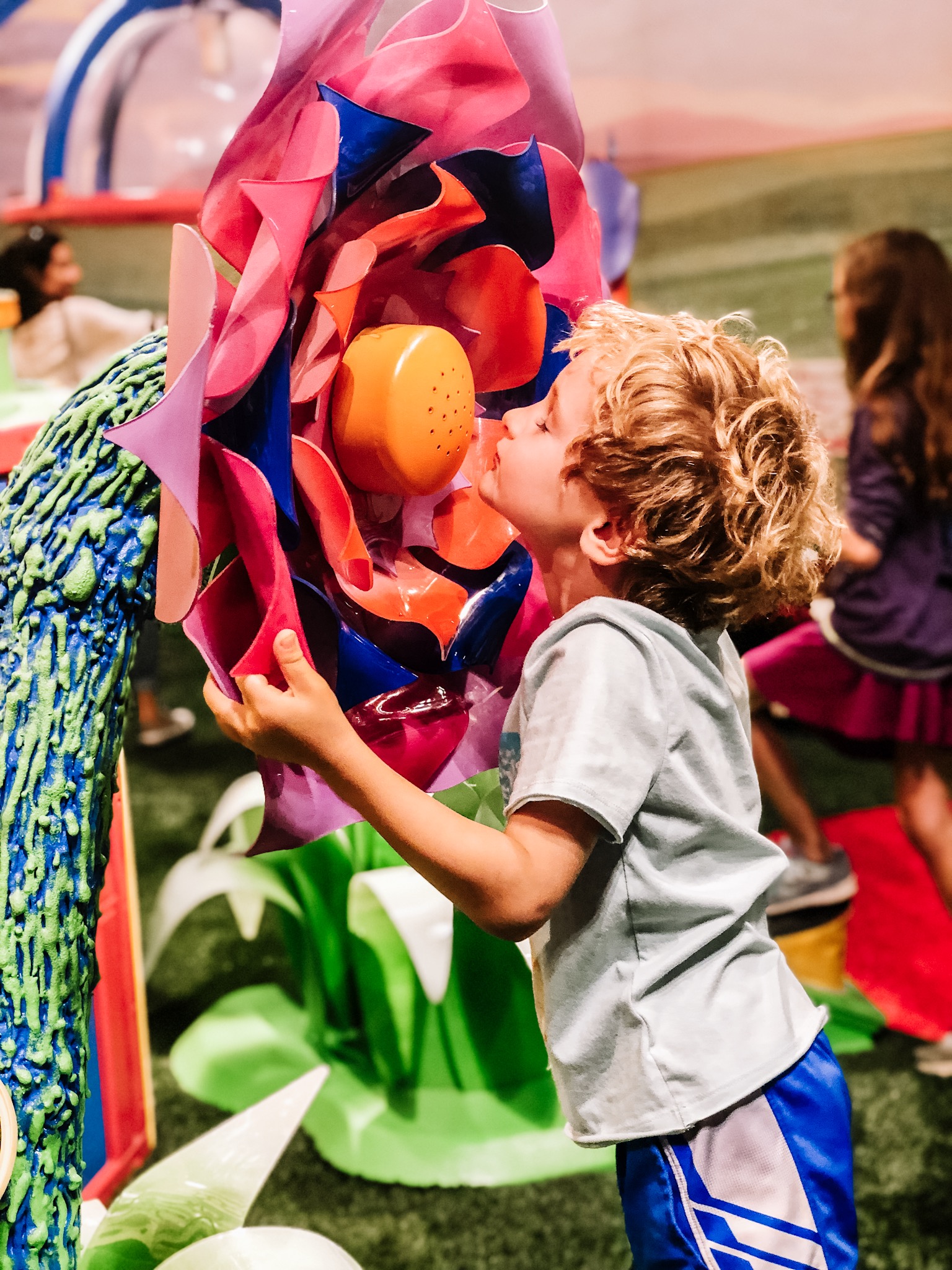 One room, in particular, is set up like a garden with swings, a playhouse, slides and these fun flowers that release various candy smells if you step on the petals. 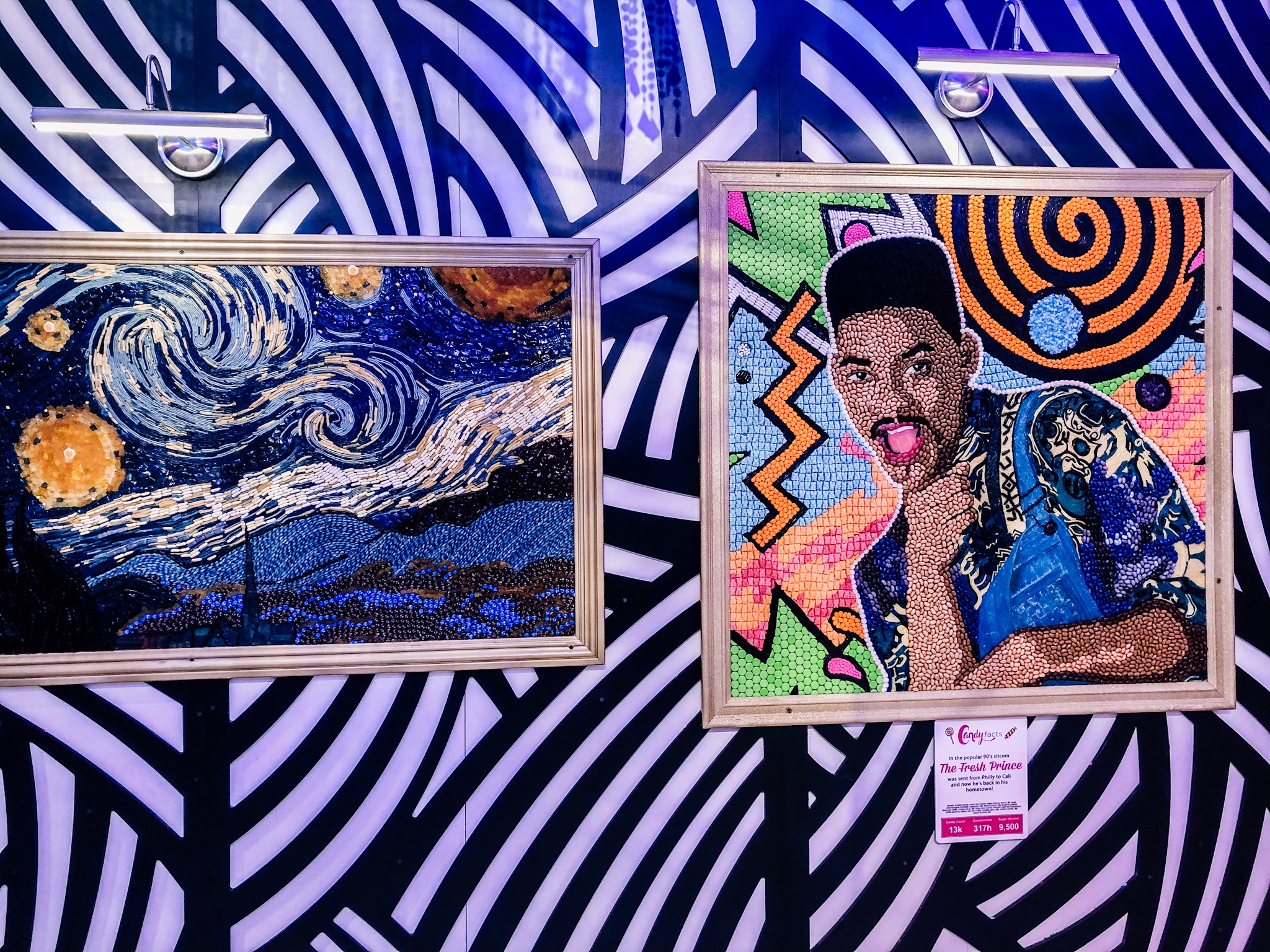 Another room had fantastical artworks made of candy. Some were of famous celebs and some were recreations of classic works of art. Look at the detail! Nothing is off-limits for touching and it’s so cool to run your hands over the different textures. 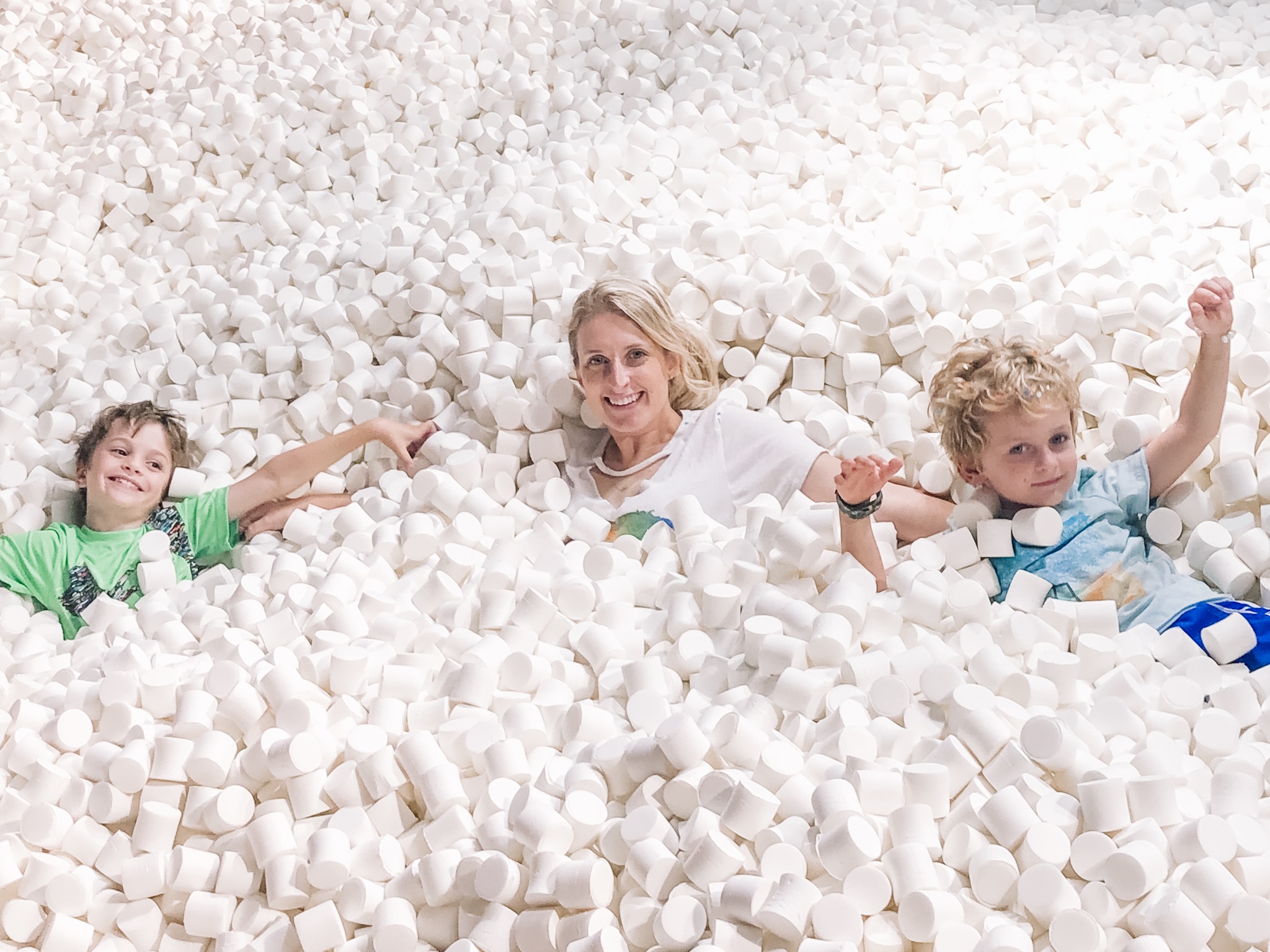 The experience ends in the marshmallow pit room. Who wouldn’t want to jump into a giant marshmallow pit? We certainly did! We threw marshmallows, took photos, and jumped around before leaving the exhibit altogether. The final, final room is technically the candy store at the end, having collected a ton of goodies on the way, we just breezed right out. 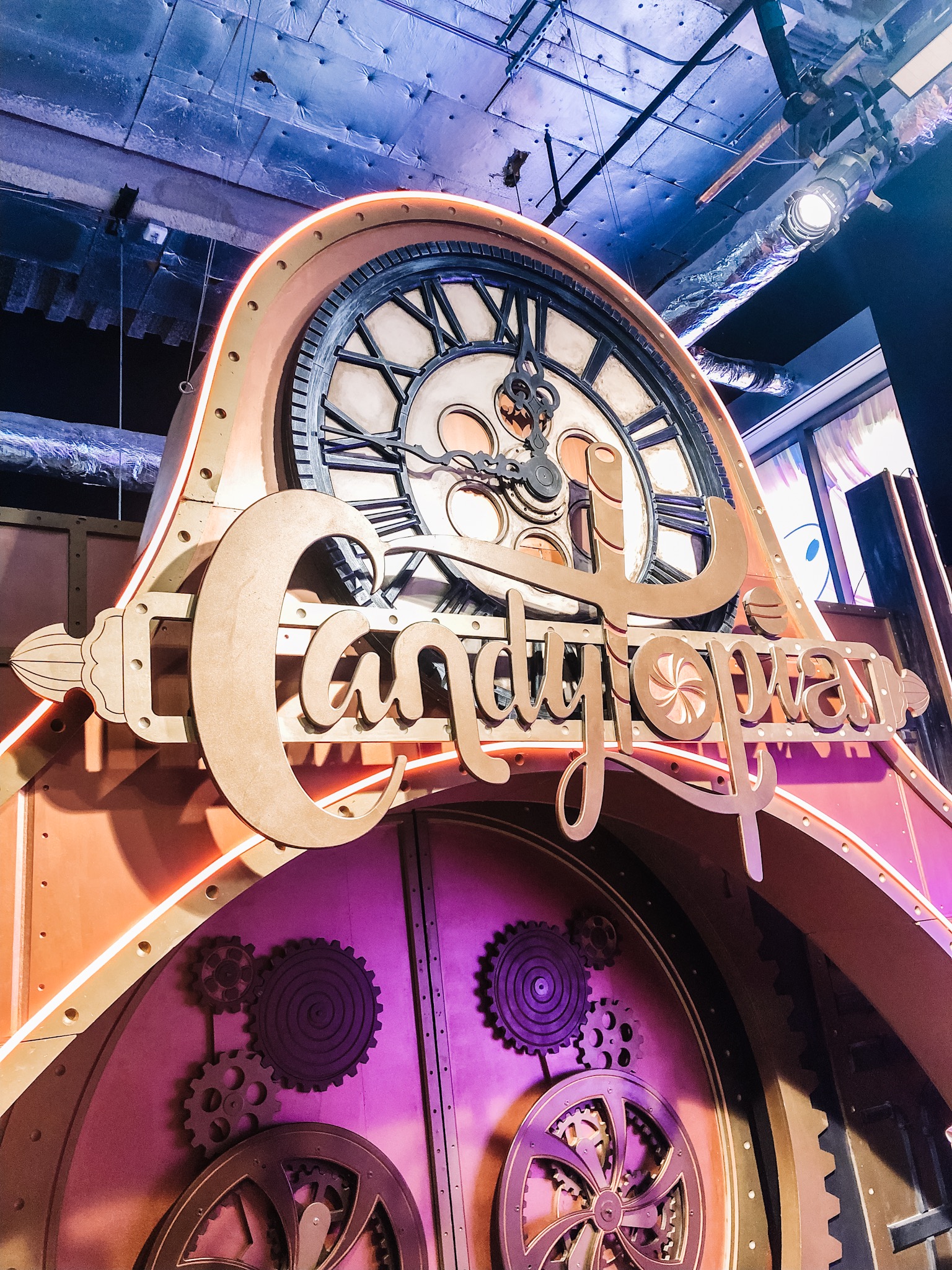 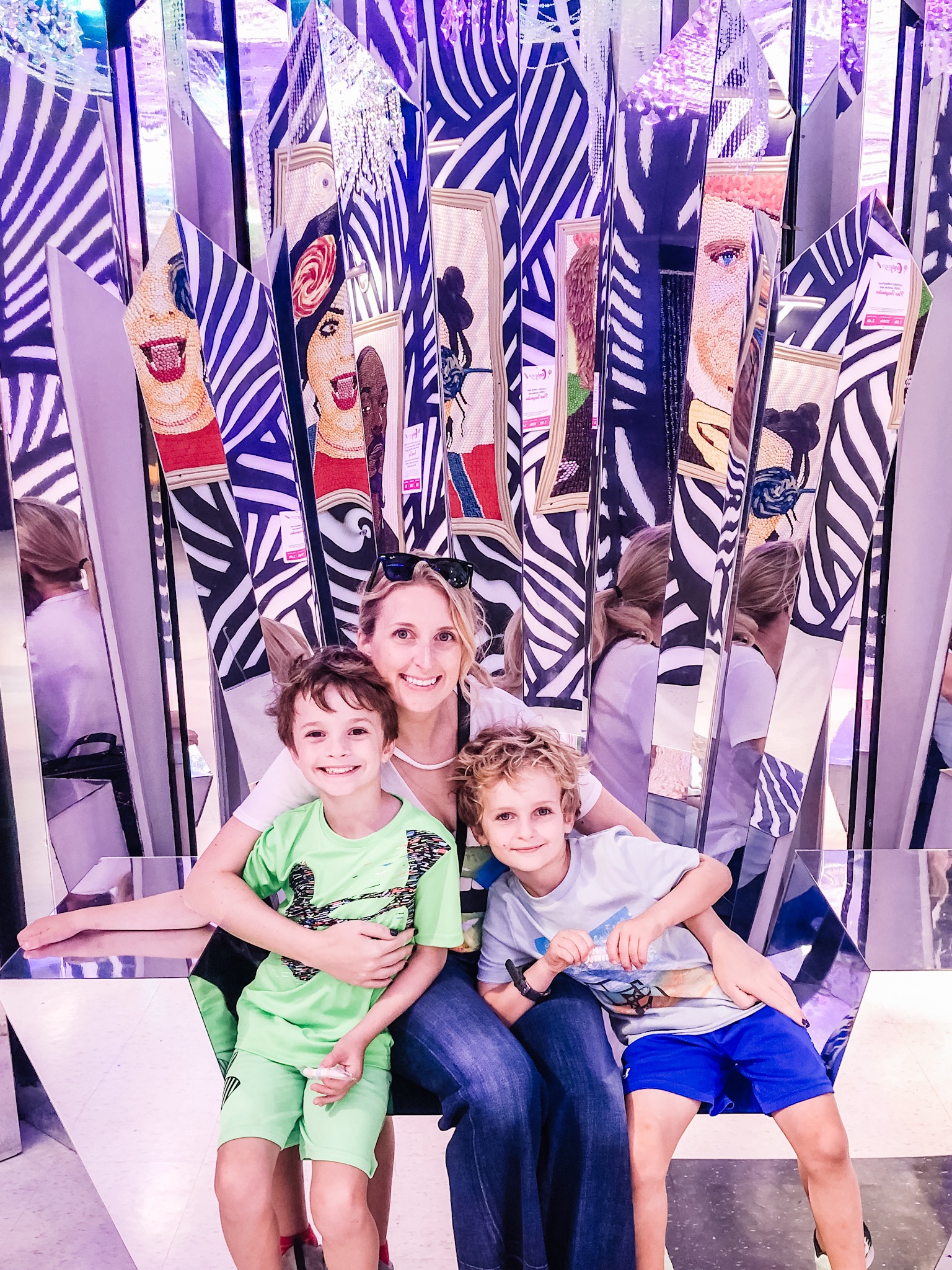 Was the cost of the exhibit worth the experience? I’d say it’s rather expensive. It took us about 30 minutes to go through the whole thing and at the prices ($28 for adults and $20 for kids) it seemed really steep to me. Yes, the kids loved it – it’s candy everything and free candy in each room – but for 30 minutes of entertainment $68 is a ton. We could have gone on a major candy shopping spree for less!

Price aside, the experience was really fun and enjoyable. If I had known how short of an experience it was going to be, I think I would have hung back a bit more and explored each space for longer. I also would have made sure to grab candy for myself along the way!

Another bonus? There are lots of photo ops throughout. As a mom of 2 boys, it’s hard to get them to pose for pictures but they eagerly took all the photos, boomerangs, and videos I wanted….because CANDY! I mean look at that shot! I can never get these kids to pose usually and now I have a lovely photo with my kids. There are staff members in every room willing and able to take your photo. They even recommend where to stand for some fun boomerangs. 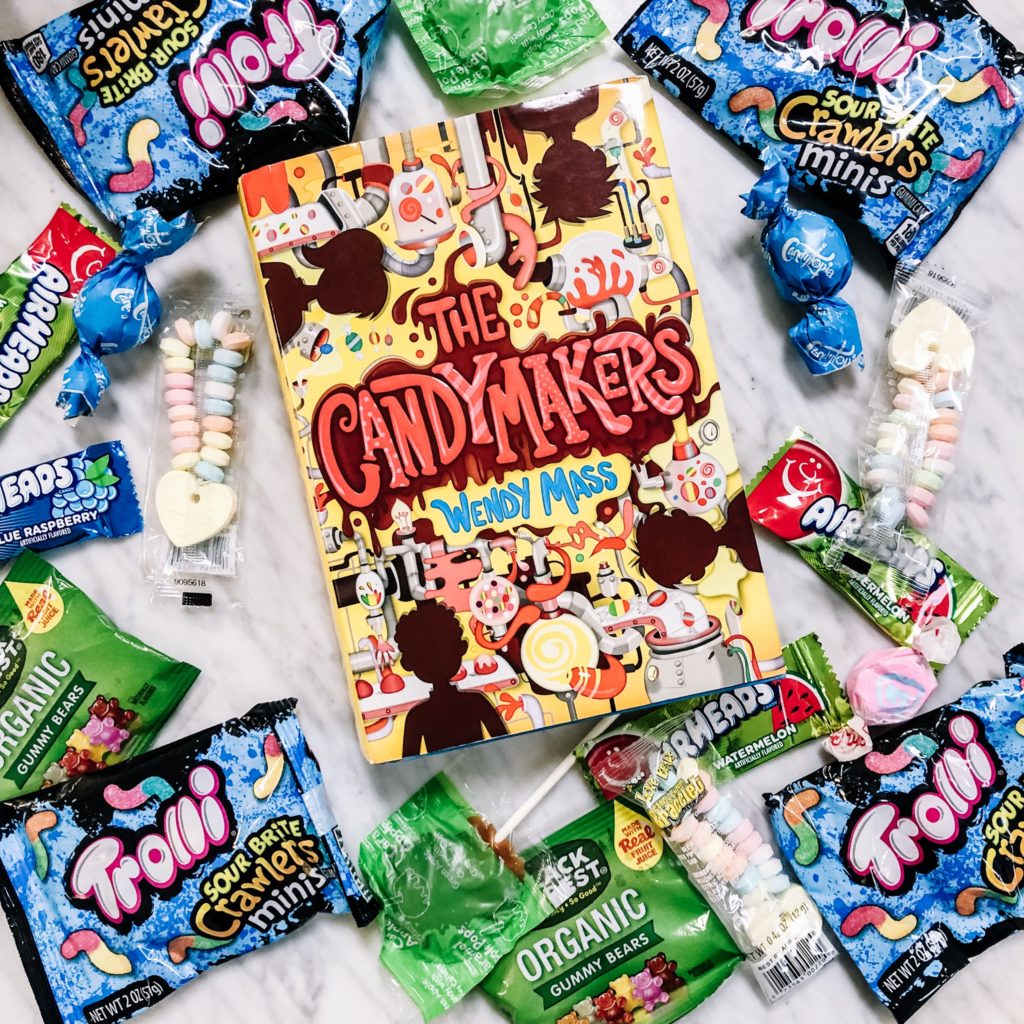 The Candymakers and other books about Candy

The Candymakers by Wendy Maas

In the town of Spring Haven, four children have been selected to compete in the national candy making contest of a lifetime. Who will make a candy more delicious than the Oozing Crunchorama or the Neon Yellow Lightning Chew?

Logan, the candymaker’s son, who can detect the color of chocolate by feel alone?

Miles, the boy allergic to rowboats and the color pink?

Daisy, the cheerful girl who can lift a fifty-pound lump of taffy as if it were a feather?

This sweet, charming, and cleverly crafted story, told from each contestant’s perspective, is filled with mystery, friendship, and juicy revelations.

Charlie and the Chocolate Factory by Roald Dahl

In this zany twist on the legend of King Midas and his golden touch, a boy acquires a magical gift that turns everything his lips touch into chocolate!

Can you ever have too much of your favorite food? John Midas is about to find out….

The Chocolate Touch has remained a favorite for millions of kids, teachers, and parents for several generations. It’s an enjoyable story that pulls in even reluctant readers.

Who was Milton Hershey? by James Buckley Jr.

Discover the man behind the chocolate bar! Milton Hershey’s life was filled with invention and innovation.  As a young man, he was not afraid to dream big and work hard.  Eventually, he learned the secret to mass-producing milk chocolate and the recipe that gave it a longer, more stable shelf life.  He founded a school for those who didn’t have access to a good education and an entire town for his employees. Both his chocolate empire and his great personal legacy live on today.

Magical candy that gives kids superpowers? Sweet! The possibility of evil overtaking the world? Not so tasty. And so begins The Candy Shop War, a trilogy from the #1 New York Times bestselling author of the Beyonders and Fablehaven series.

Welcome to the Sweet Tooth Ice Cream & Candy Shoppe, where the confections are a bit on the…unusual side. In this start to the series, four young friends—Nate, Summer, Trevor, and Pigeon—meet the grandmotherly Mrs. White, owner of the Sweet Tooth, and soon learn about the magical side effects of her candies: Rock candy that makes you weightless. Jawbreakers that make you unbreakable. Chocolate balls that make you a master of disguise.

The Legend of Candy Cane by Lori Walburg

One dark November night a stranger rides into a small prairie town. Who is he? Why has he come? The townspeople wish he were a doctor, a dressmaker, or a trader. But the children have the greatest wish of all, a deep, quiet, secret wish.

Then a young girl named Lucy befriends the newcomer. When he reveals his identity and shares with her the legend of the candy cane, she discovers fulfillment of her wishes and the answer to her town’s dreams. Now will she share what she has learned?

Vibrant illustrations by Richard Cowdrey bring to life a timeless tale by Lori Walburg, a story that will help families celebrate the mystery and miracle of Christmas―for many Christmases to come.

Getting Chocolate Fever can change your ideas about chocolate and life!

Henry Green is a boy who loves chocolate. He likes it bitter, sweet, dark, light, and daily; for breakfast, lunch, dinner, and snacks; in cakes, candy bars, milk, and every other form you can possibly imagine. Henry probably loves chocolate more than any boy in the history of the world. One day-it starts off like any other day-Henry finds that strange things are happening to him. First he makes medical history with the only case of Chocolate Fever ever. Then he finds himself caught up in a wild and hilarious chase, climaxed by a very unusual hijacking! 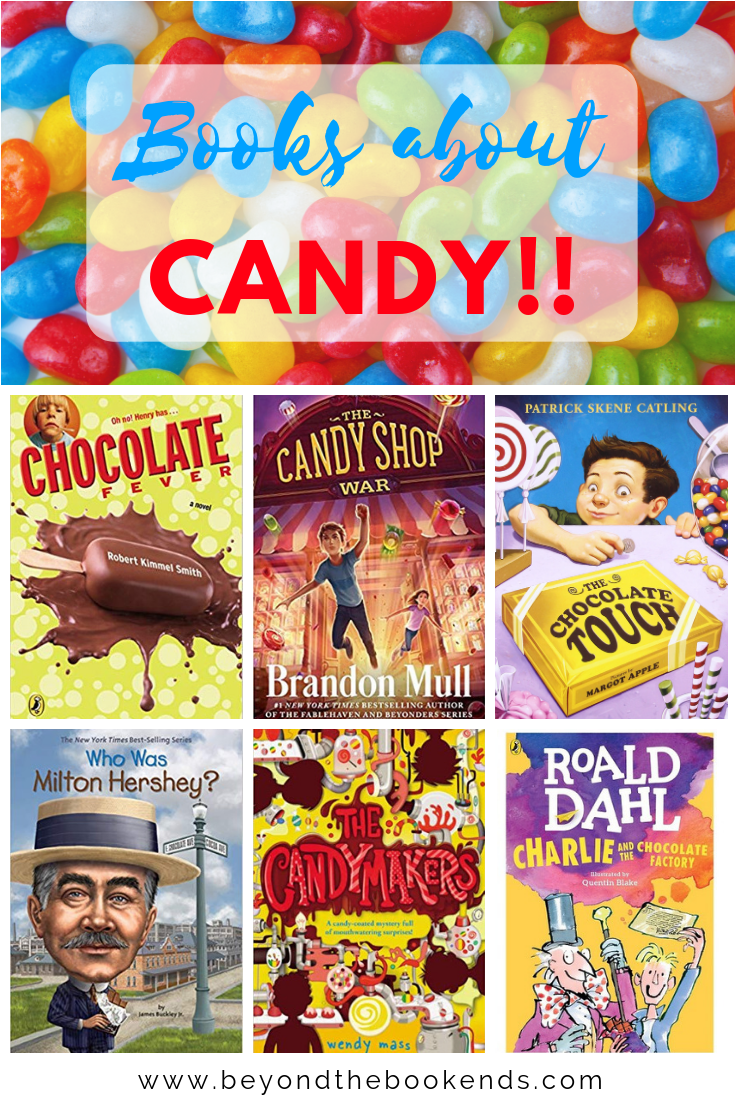