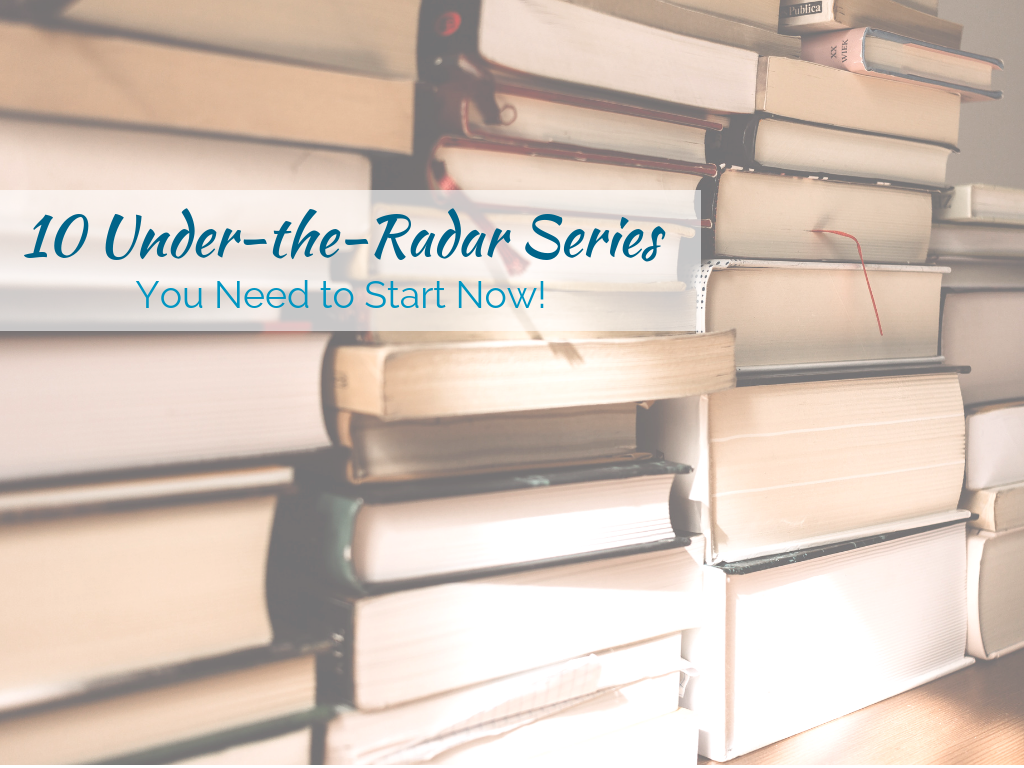 This month for our reading challenge, we are reading the next book in a series.  Kirsten and I love reading series of books.  So often you fall in love with a character/ characters and it feels like one book just isn’t enough.  Series like Harry Potter have defined an entire generation and created a generation of readers. Other book series like Outlander and Game of Thrones have cult-like followings.  Hollywood has turned other series like the Lord of the Rings into billion-dollar empires.  We wanted to highlight our favorite under-the-radar book series that you might not have read yet.

This was the book that started my love of a great mystery.  The small town of Three Pines is an almost perfect village in rural Quebec. The fact that this series takes place in Canada was a bonus for me.  Chief Inspector Gamache is just the right amount of brilliance and arrogance that you cannot help loving him.  I read 11 of the 14 books in this series in one year and now, I am trying to pace myself.

This one is for all the Sherlock fans out there. It takes place after the classic canon ends with the introduction of the retired Holmes and his new neighbor – Mary Russell. I adore this series, as does my dad who is a mystery reader exclusively. Mary Russell is the perfect foil for Sherlock, dare I say she is even a better sidekick than trusty Watson? Maybe you should read it and find out!

Clan of the Cave Bear: Earth’s Children Book One by Jean M. Auel

I can’t remember when I first read this book but, I know my mother gave it to me. I loved it.  The entire idea of looking into the life of prehistoric man was captivating and unlike any other book I have ever read.  The love of this book lead me to read the entire series which was published over a period of 25 years!!!! Can you imagine having to wait 25 years to read Harry Potter and the Deathly Hallows? I think my wait was only 15 years but still….. It has everything and at its heart is an epic love story.  One of my all-time favorites.

The thing I love about Susan Elia MacNeal is that she doesn’t make the females in her series meek. She puts them center stage in the middle of the war; solving mysteries, spying, fighting and the like. The women in this historical fiction series are tough cookies who don’t need a man’s protection. I adored the whipsmart Maggie Hope who is at the center of this mystery series. I’m only a few books in but I love each one.

The Bear and the Nightingale by Katherine Arden

I loved this magical realism story that takes place in Russia. The story revolved around Russian mythology which is a new topic for me but was quite enjoyable. It’s the first in a trilogy whose final story is being released later this year. I look forward to reading the rest!

Wizard’s First Rule is the first hardcore fantasy series that I ever read. My brother recommended it to me because he was obsessed with it. It quickly became a huge passion of mine and I devoured probably 10,000 pages in the series. The series was basically the only books I read for a solid year. Filled with romance, fantasy, and magic, the story is utterly captivating.  Originally published 25 years, it’s still worth reading in 2019.

A Court of Thorns and Roses by Sarah J. Maas

OMG.  Where do I even begin with this book?  A fairy-tale retelling loosely based on Beauty and the Beast featuring a bad-ass heroine and a love story you will be swooning over.  The first in a series of four novels, each book gets better than the last.  Sarah J. Mass transports you into the world of Prythian so completely that when you look up from the pages you have to blink a few times to remember where you are.

A Study in Charlotte by Brittany Cavallaro

I really enjoyed the first book in the Charlotte Holmes Trilogy. I’ve mentioned before that I am a big Sherlock Holmes fan (review). This story was different from the others because it takes place in modern times and the central characters are the teenaged descendants of Mr. Holmes and Dr. Watson. The adolescent angle leaves room for error in Holmes’ deductive reasoning skills. Watson is also a more fleshed out character that has deductive reasoning skills of his own. The novel wraps up nicely and the characters solve the mystery leaving enough open ends to allow for a sequel.

The Royal Treatment by Melanie Summers

This is a completely hilarious book about what happens when a royal watchdog moves into the palace for complete access to the royal family. It is a perfect romantic comedy and has all the makings of a great movie. The very first scene of the female lead running up a hill while testing a fitness product that zaps her caused me to laugh so hard my tea flew out of my nose. I’ve read all three books in the series and would recommend them to anyone looking for a light-hearted romance.