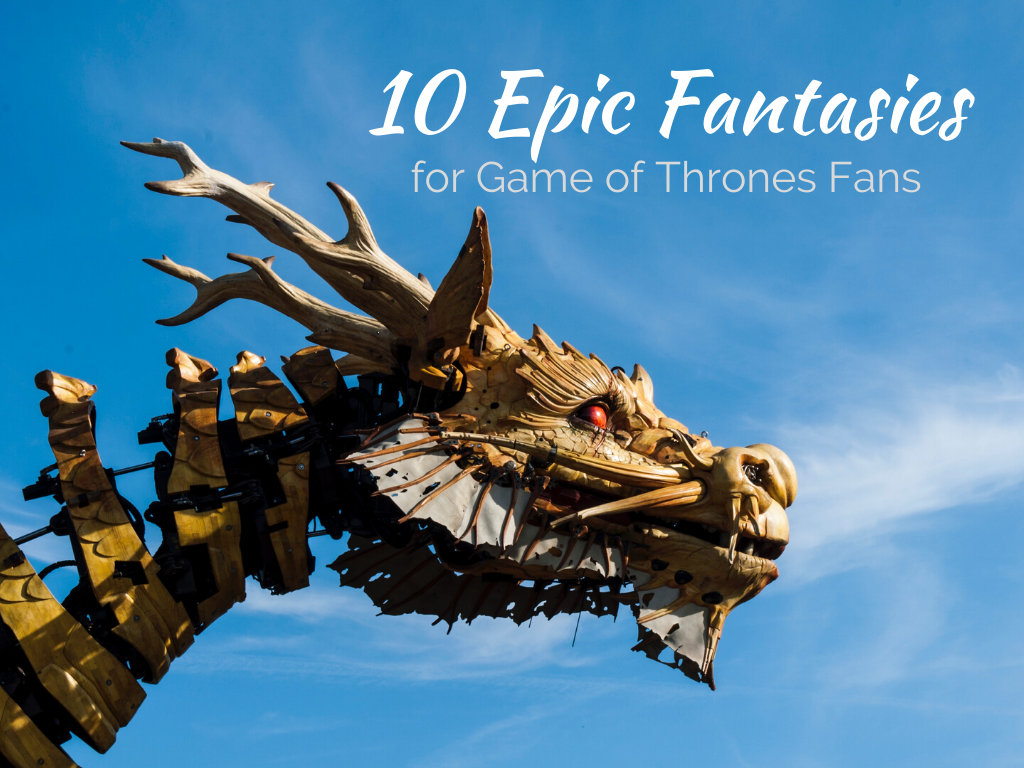 We get frequent questions about books to read if you loved Game of Thrones. Hardcore Fantasy is not a genre that Jackie or I tend to know much about. Our epic list of Fantasy Fiction doesn’t have anything nearly as involved as the Game of Thrones series. Luckily my sister, Davielle, is huge into the genre. We’ve asked her to write a post to help all you GOT fans and she totally came through. Enjoy her recommendations!

Fantasy is one of my favorite genres of books. I was hooked when I read The Hobbit in 4th grade; I embraced my inner dork and haven’t looked back since. Now, based on the number of TV shows and movies that have recently come out/are slated to grace the screen, as well as Harry Potter having its own freaking award-winning Broadway play, fantasy is no longer a “fringe”-type genre. In particular, I’ve recently seen so many book lists along the lines of “GOT is over – now what?!” and I’m thrilled to provide some answers to Beyond the Bookends.

The list below is my personal Top 5 favorite fantasy books/series and includes why they have this illustrious honor. You might not find them on a “best of” list anywhere else, but these are the books that kept me up way past when I should have been asleep! Below that, I’ve included a few staples of the genre – the ones that habitually make the “top 10” lists – that I’ve also thoroughly enjoyed reading but don’t necessarily make my top 5. Lastly, I added a few recs for younger readers since that was when I developed my love for the genre! Please also know, there are so many more books I could have included (The Wizard of Earthsea

, etc.) but that’s what Goodreads is for, right?

PS – I’m not including the books or series that have fairly recent movies or TV franchises, so please don’t look for any Middle Earth, Harry Potter, Narnia, or Golden Compass recs here. While all could be on this list, you already know them (and if you don’t – what are you doing?!) so let’s not waste the real estate!

Best of the Best Fantasy:

The Belgariad series by David Eddings
The Belgariad is 5 books of epic fantasy; an immersive new world with its own mythology and rules. This series is filled with a cast of characters that you can’t help but root for, secret identities, fighting, magic, good and evil squaring off… basically everything you want in an epic fantasy series. The series begins in Pawn of Prophecy with Garion, an orphan, his Aunt Pol, who is a cook but holds herself like a queen, and a vagabond storyteller who seems to be able to cast a spell over his audiences. The three are joined by a rag-tag group (including a thief – I love a good thief character in my fantasy books!) as forces larger and older begin to fulfill an ancient prophecy.

The Elenium series by David Eddings
Eddings does that same worldbuilding in his other series, The Elenium. In The Diamond Throne (the first of 3 books), you are introduced to Sparhawk, the queen’s champion and first knight, as he returns from exile. Eddings uses his same sense of humor and tone, creating a tale of knights, magic, and a quest to save the kingdom that is enjoyable from start to finish. Plus, his loyal horse, Faran, has a personality all of his own (shades of GOT’s dire wolves).
Both series have sequel series. He and his wife have written other stories but I have found these series to be the best!

On A Pale Horse (Incarnations of Immortality #1) by Piers Anthony
This was the book that opened my eyes to the idea that fantasy is more than just magic and quests. Anthony builds a world all his own when Zane, an ordinary young man, accidentally shoots Death and has to take up his mantel. Like all great fantasy books, Anthony uses the genre to explore some of life’s bigger questions: What is death? What does mercy look like? Who gets to judge others and why? As a bonus, Piers Anthony is a master of wordplay (see his other fantastic and classic series, Xanth), so there’s always fun to be had. There are 5 books in this series but this one is far-and-away my favorite and the first in the series.

Dragon Jousters series by Mercedes Lackey
Dragons! It’s all about the dragons! Mercedes Lackey is a respected name in the fantasy world and, while this series was written more recently than her Heralds of Valdemar series, she clearly hasn’t lost a step. This series is more Egypt-inspired rather than the classic medieval and focuses on the characters both humans and dragons, while also building out the world of the Titans and the Altans, the 2 warring peoples, and the slave boy who challenges it all. And have I mentioned the dragons?!

Red Rising Saga series by Pierce Brown
This series is a recent addition to the genre and is currently ongoing with the most recent book out this past year, and it does its genre predecessors proud. The world feels rich and lived in, with plenty of details that despite the addition of gods and a new language, I have no trouble understanding this world. This series is more focused on politics, class warfare, actual warfare, and rebellion but does not skimp on making you feel connected to the plot. Brown is not afraid to have complex or even unlikable characters, which just adds to the veracity of the series.

Children of Blood and Bone by Tomi Adeyemi
This book (and series, though the second book is not out yet) is being hailed as a new classic and for very good reasons. It takes place in an African-inspired setting, full of repressed and outlawed magic, family secrets, the evil king, and an epic journey. Plus, all of the characters are POCs and, while I admit that’s why I picked it up, I stayed for the fantastic story. I am anxious for book 2 to come out so I can experience this world and the characters more.

Take a Thief (a Valdemar novel) by Mercedes Lackey
Lackey is known for establishing one of the largest fantasy series, the Heralds of Valdemar, which is why this rec is under the classics category. This particular book, however, is an offshoot that focuses on one of the secondary characters mentioned in the main series. Skif is a thief (again, love a good thief) and this dives into his background. Sometimes it’s fun to have the author go into another aspect of a well-established world (Valdemar was first introduced in Arrows of the Queen in 1987) and take you on a new journey.

The Riftwar Saga series by Raymond E. Feist
This series, beginning with Magician: Apprentice, is closer in tone and style to J.R.R. Tolkein or George R. R. Martin. It takes itself very seriously and the reader can’t help but take it seriously as well. And shoutout to Silverthrone, my favorite book in the series.

The Color of Magic (Discworld series) by Terry Pratchett
This is a staple of any fantasy lover but, unlike most other books on fantasy lists (including this one), it has a great sense of humor on purpose – the word irreverent is used in almost every summary or description. The series is massive and you may have to just go with it for a little, but I promise the journey is worth it.

The Last Dragon Slayer by Jasper Fforde
Jennifer Strange is the spunky female protagonist who has to deal with clueless adults while working in a magic shop – the problem is magic just isn’t what it used to be. Fforde has a quirky way with his characters and this was written with a younger audience in mind.

Dragonflight (Dragonriders of Pern #1) by Anne McCaffrey
This is a classic and how a lot of people I know (and the internet confirms) were introduced and subsequently hooked on the genre. In the land of Pern, dragons from telepathic bonds with their riders and a simple kitchen girl might just be the savior they need.

So there it is – my top 10 fantasy books to read if you loved Game of Thrones. I hope you enjoy them as much as I have and, if you have any suggestions (or want me to know your favorite that I left out), let me know! 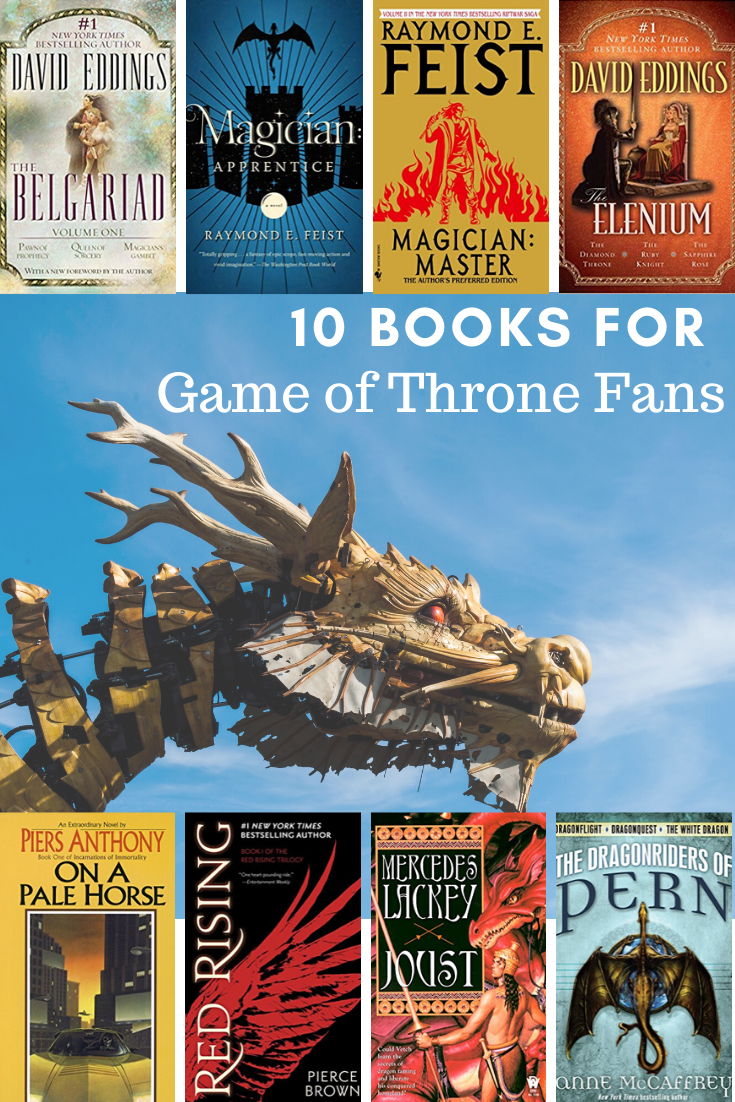 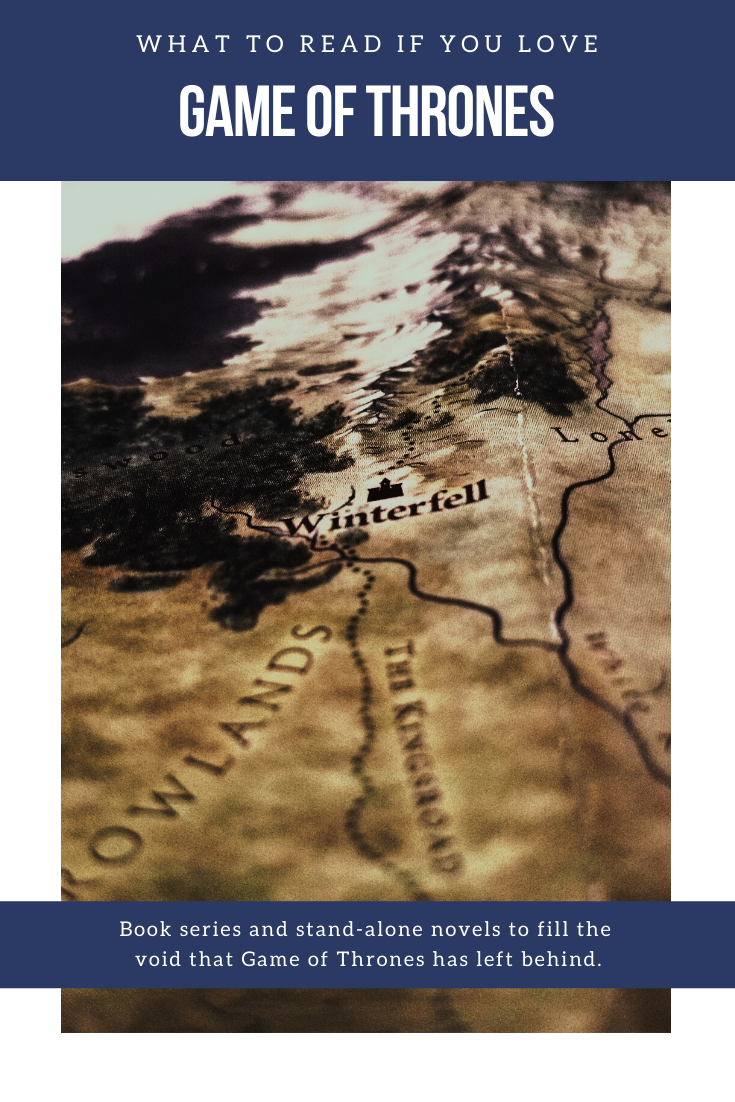