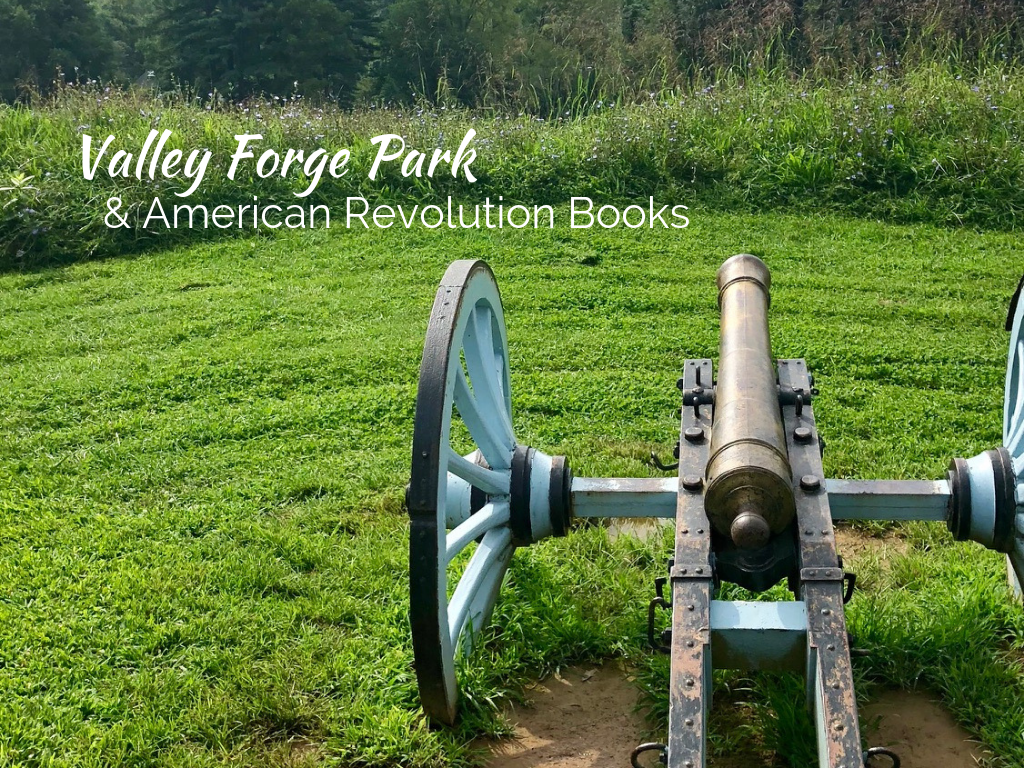 If you follow us on Instagram, you know that recently Jackie and I took the kids to Valley Forge for a little day trip. We had a fantastic time exploring the various log cabins and battle sites before settling down for a picnic at George Washington’s Headquarters. We spread out a blanket, read a cute book while we ate, and even flew a kite! We’ve got a rundown of the entire encampment tour as well as some great kids’ books about our first President.

*Post may contain affiliate links. If an item is purchased through a link we may get a small commission.

Jackie has been to Valley Forge Park many times, but she had never done the encampment tour. I’m an old pro at this tour, so I played tour guide for our 5 kids. When you enter the park at the main gate, you can go to the right toward the visitor center to get a map or you can just download one onto your phone. If you opt for the phone map like we did, you can head towards the left road where the encampment tour route is clearly delineated. It’s up a one-way road so you won’t be able to turn around. The first stop – the Muhlenberg Brigade is just at the top of the first hill. 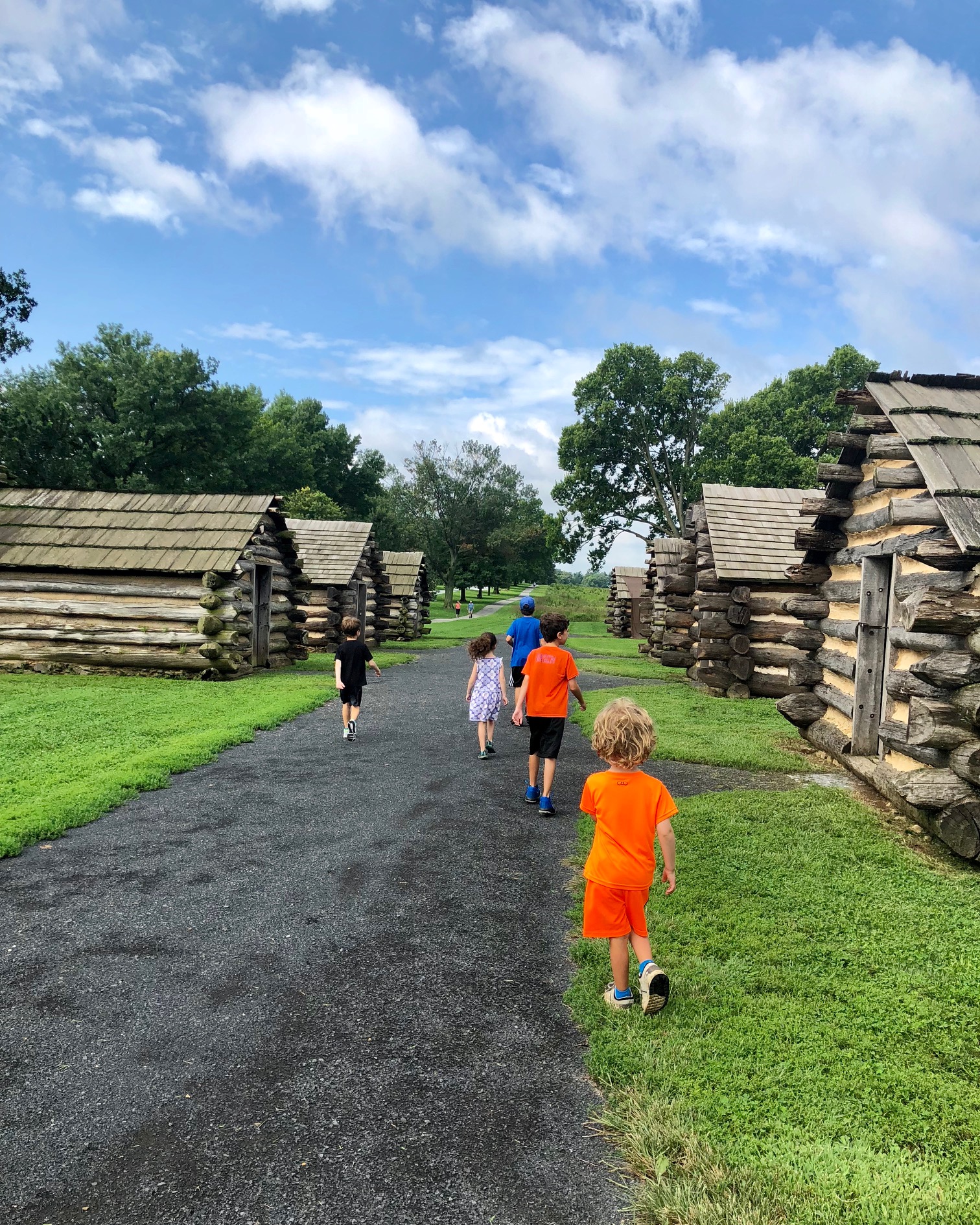 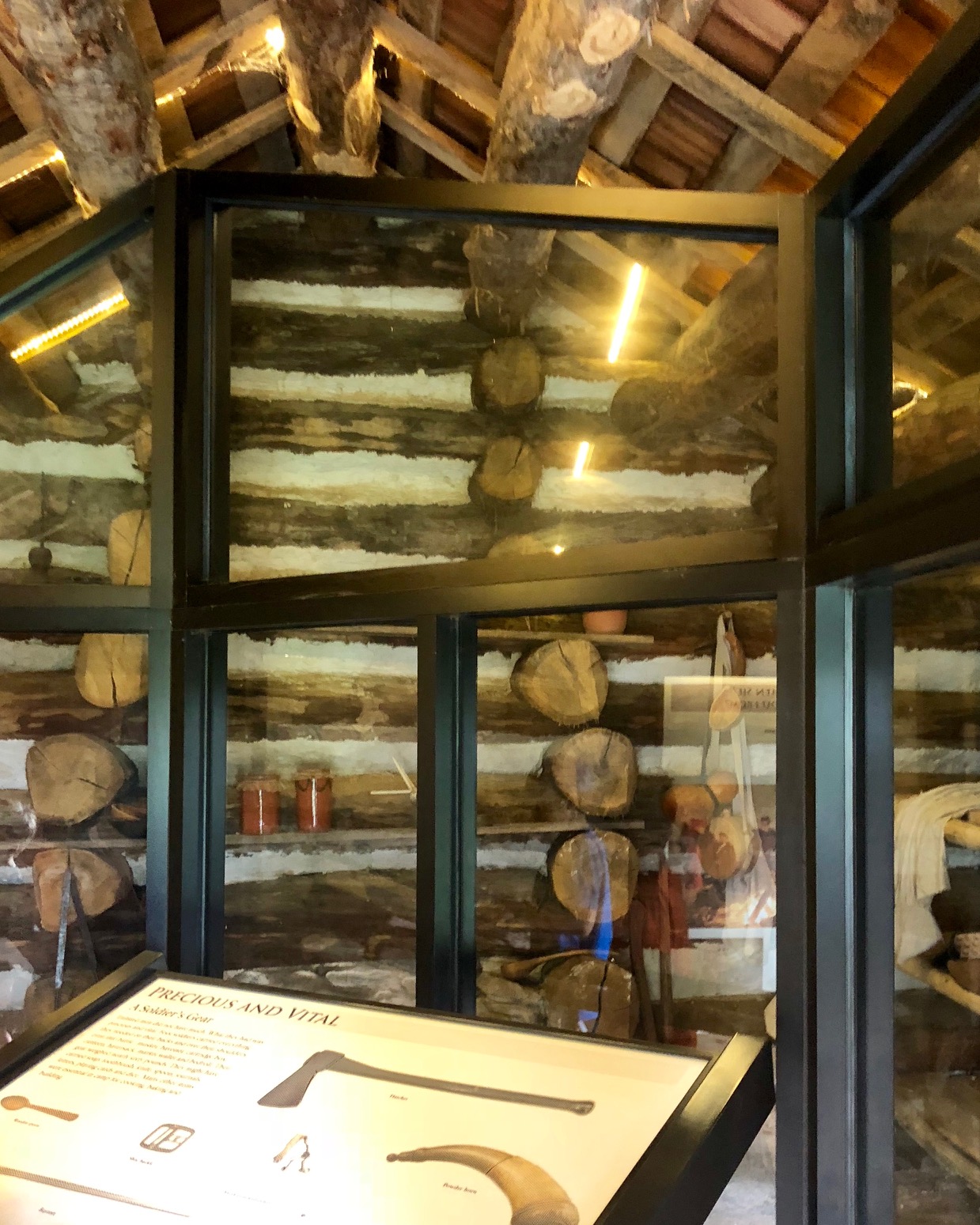 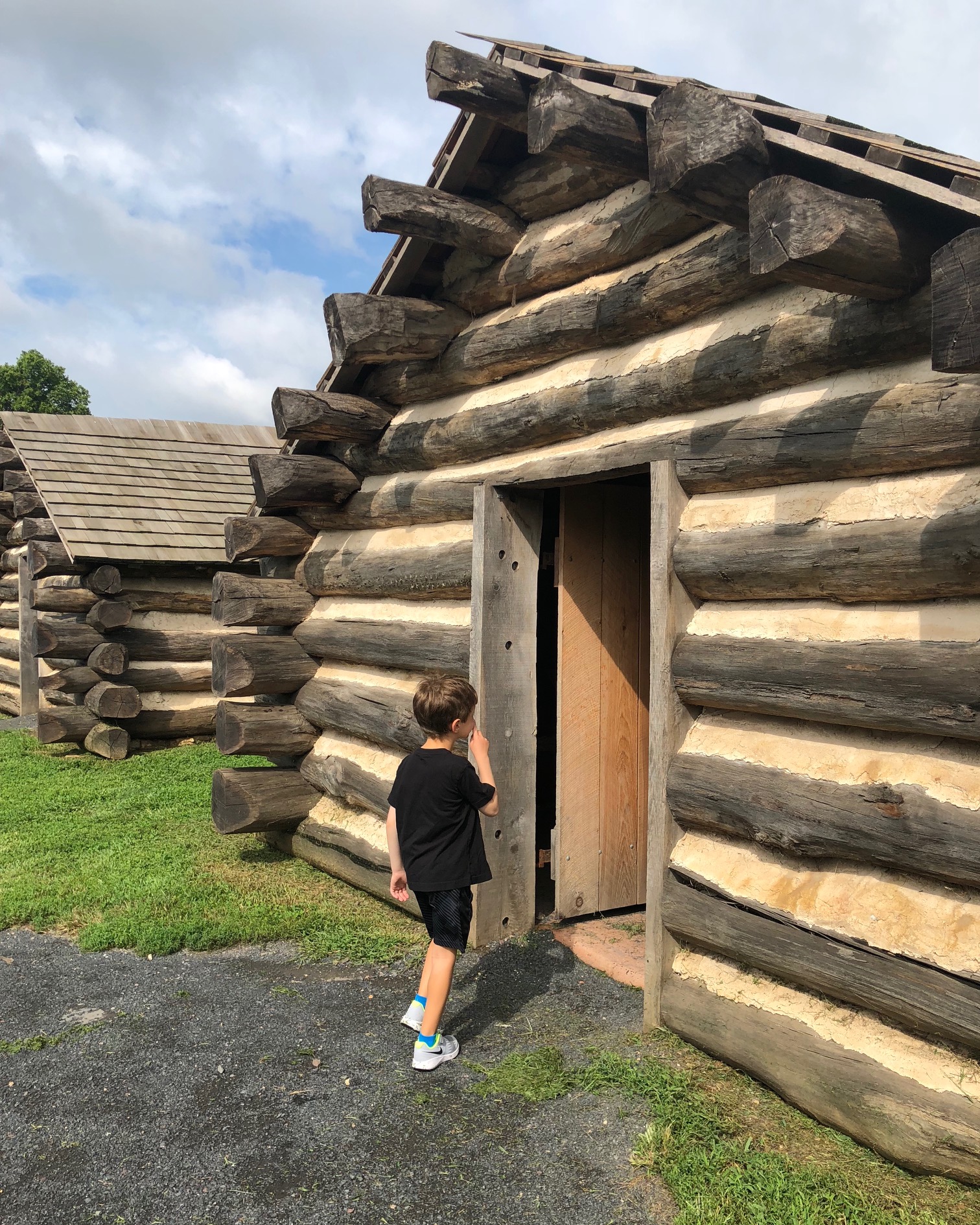 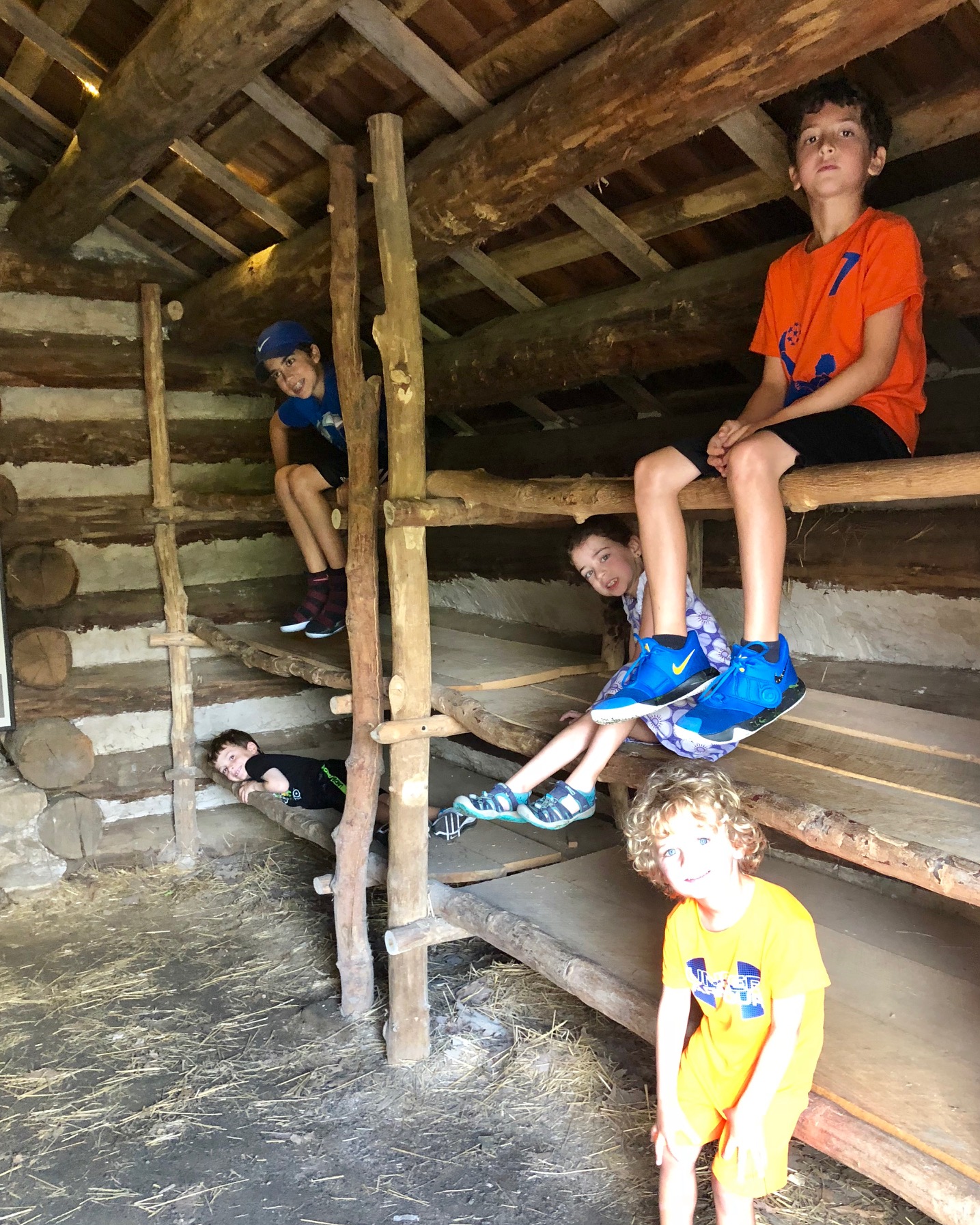 This brigade is my favorite stop on the tour. There are lots of log cabins to explore. They feature information on what the original land was before the revolutionary war, what officers quarters looked like, and even bunk beds for the kids to climb on and try their hands at military life. 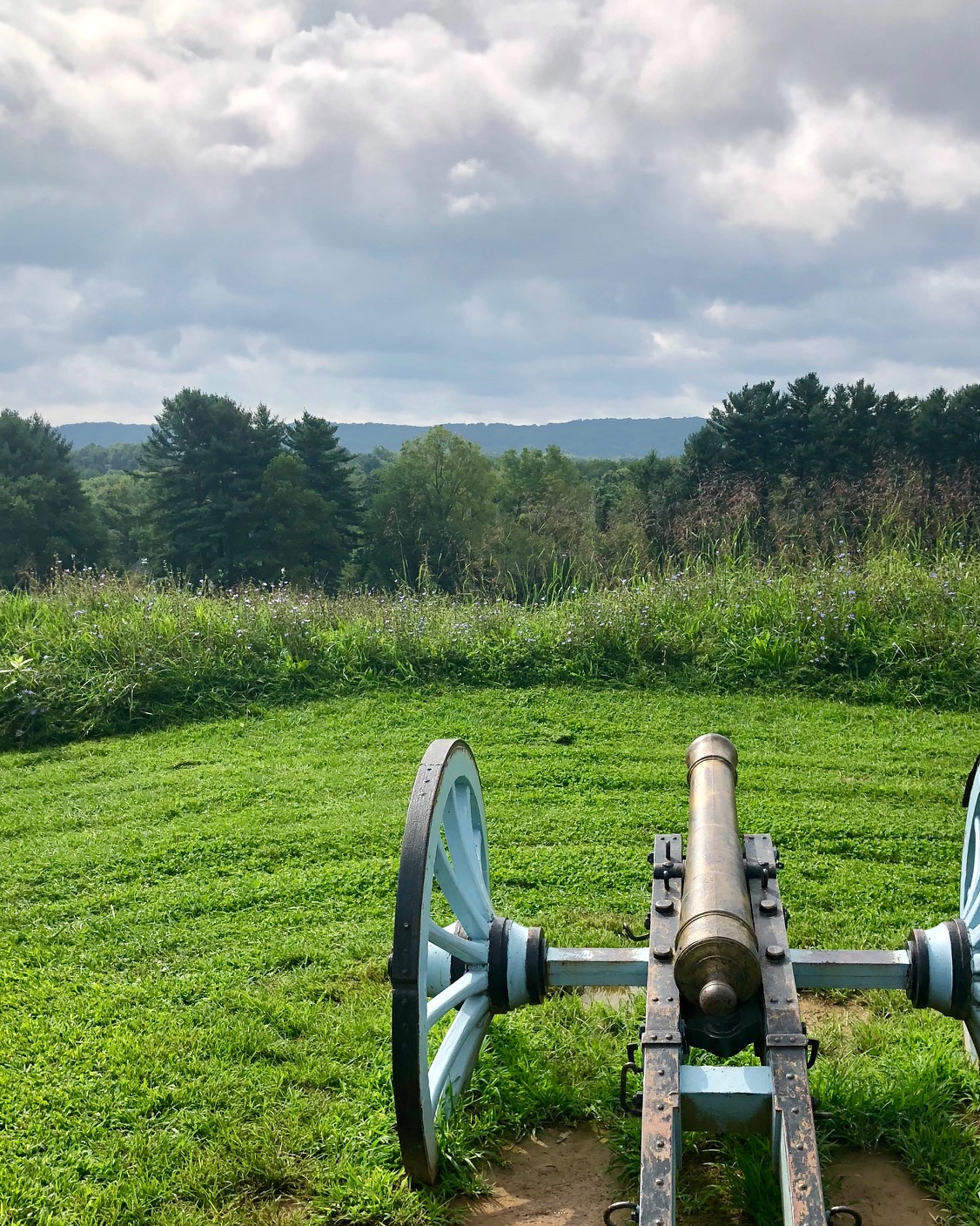 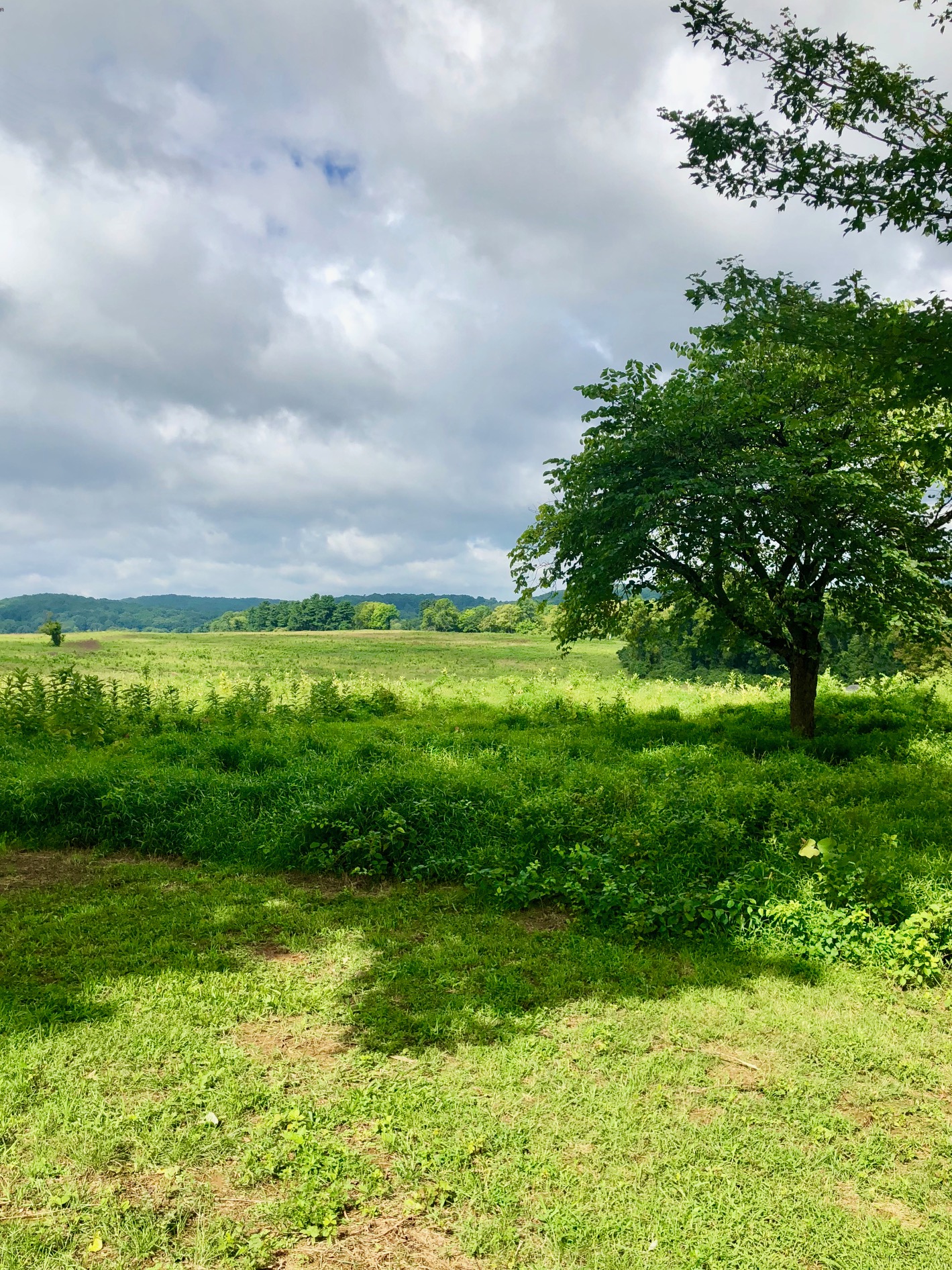 The views from this spot are incredible as well and if you venture to the end of the row, you’ll be able to see an old firepit and an oven carved into the land. It’s absolutely fascinating for both adults and kids. 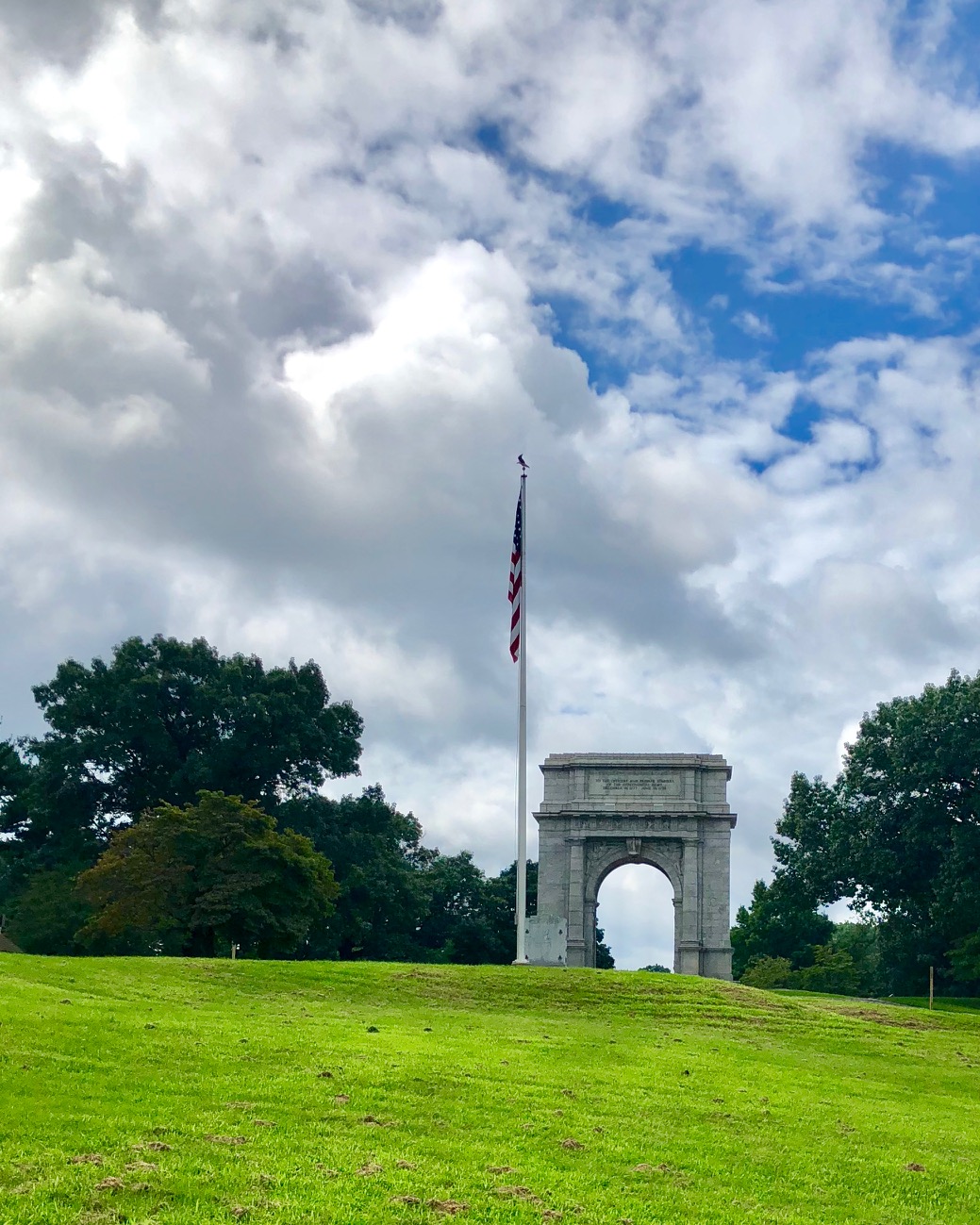 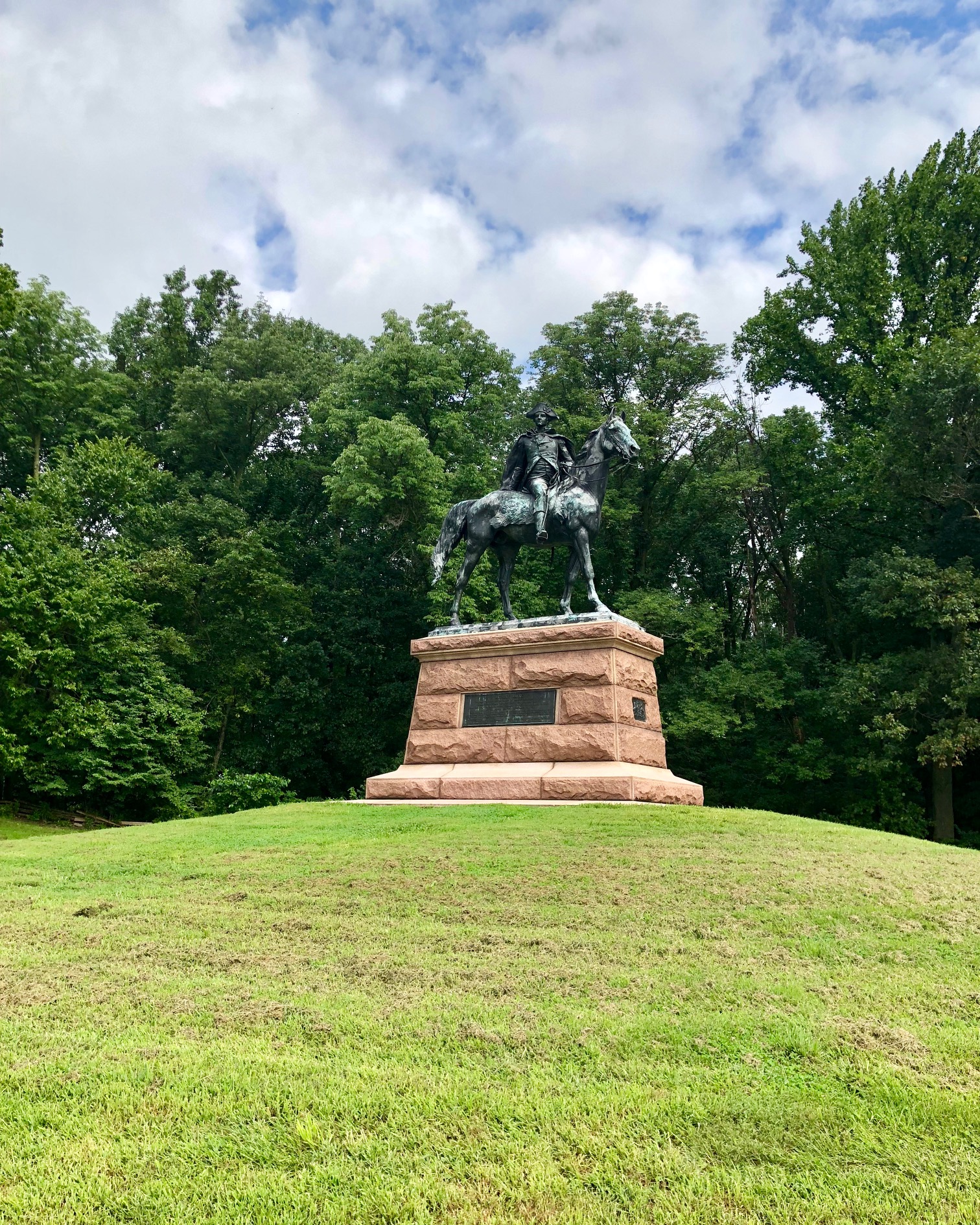 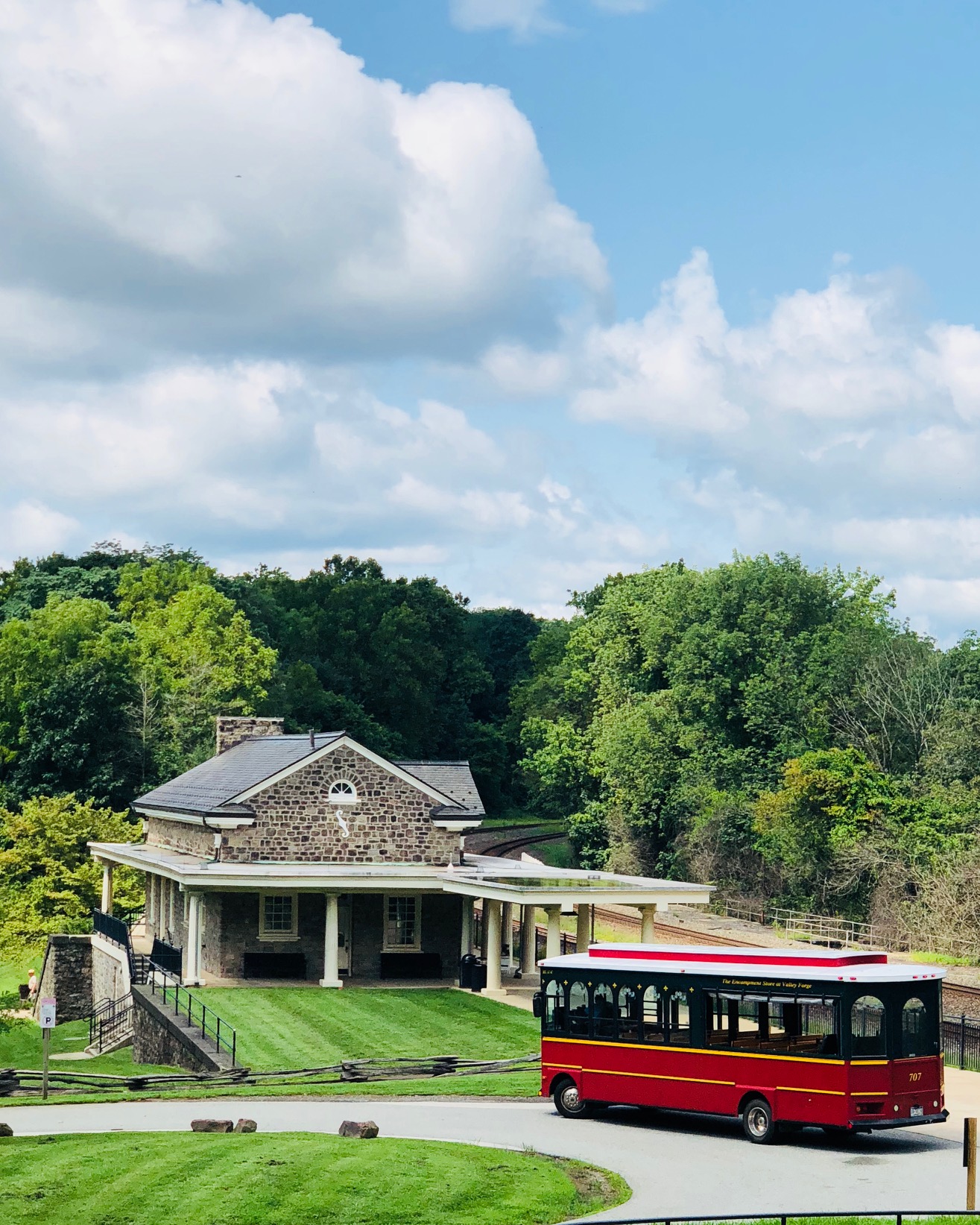 Next, we drove past quite a few landmarks and sculptures. We chose not to get out of the car, but that is totally an option. Instead, we dialed a number ( 484-396-1018) to listen to the audio tour of the sites. There is also an option to take a trolley tour – but that costs money and you are on the tour’s schedule. I’ll probably do it with the kids at some point in the future, but for now, the drive we do is perfect.

After you tour most of the sculptures, you’ll end up at George Washington’s Headquarters. There is plenty of parking and there are nice bathrooms too, so it makes for a perfect pit stop. 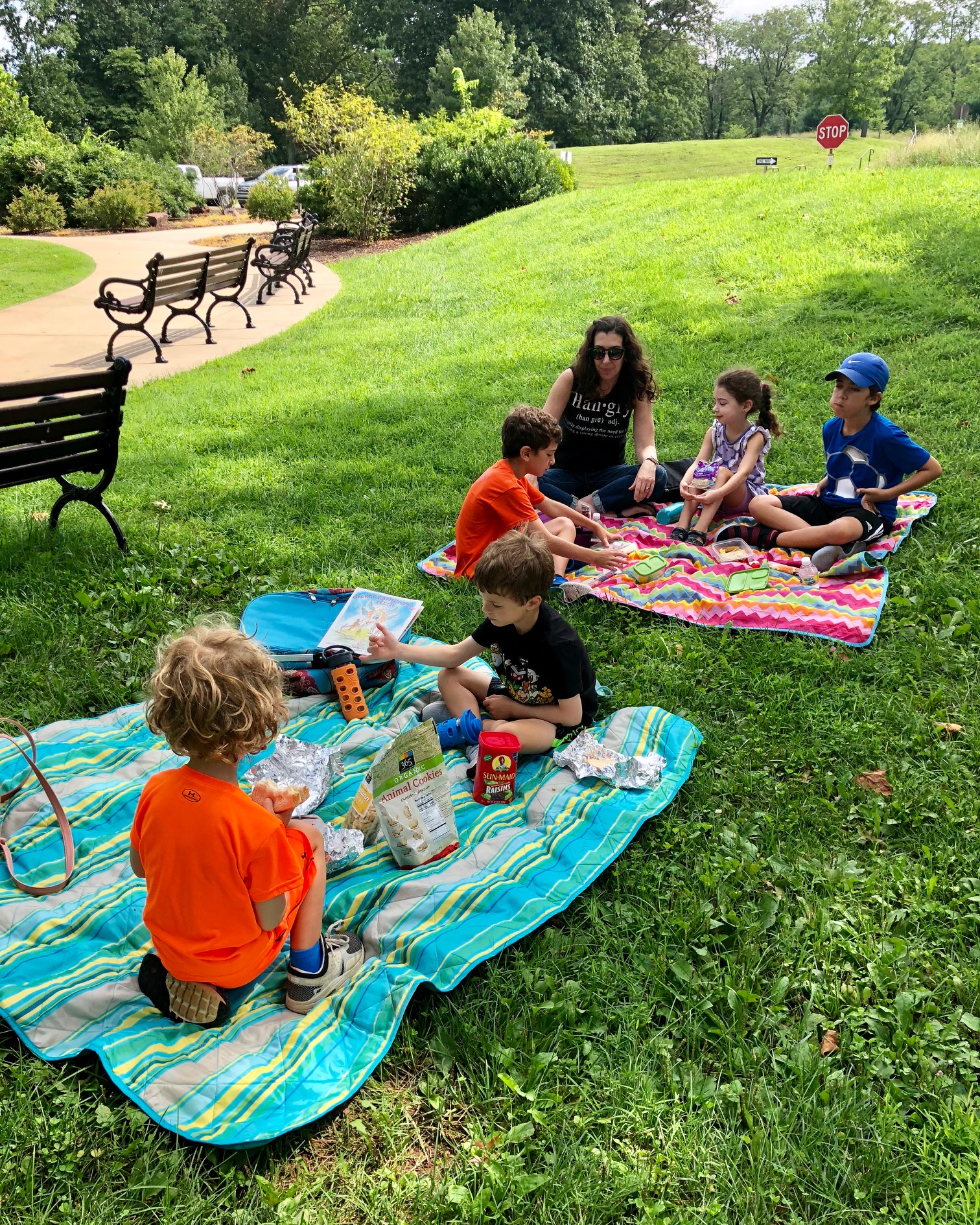 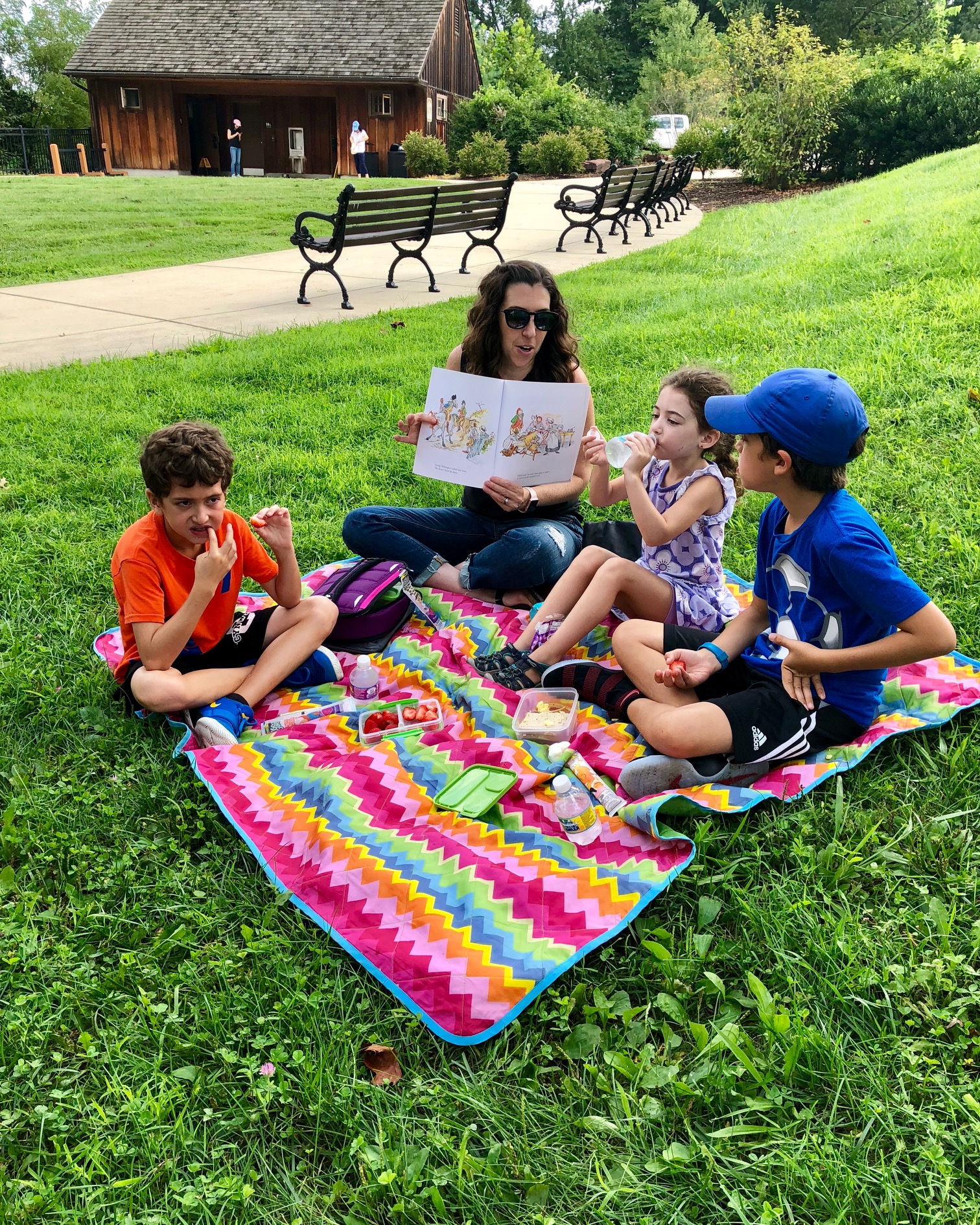 Up by the parking lot and the bathrooms in a grassy knoll. This is where we chose to have our picnic lunch. We brought a copy of George Washington’s Teeth – a fiction book that tells the tale of George’s life based on when his teeth fell out! It had the kids in stitches,  but they were most fascinated by the true timeline in the back of the book and the facts listed about this teeth. Who knew that good ole George didn’t have wooden teeth after all? 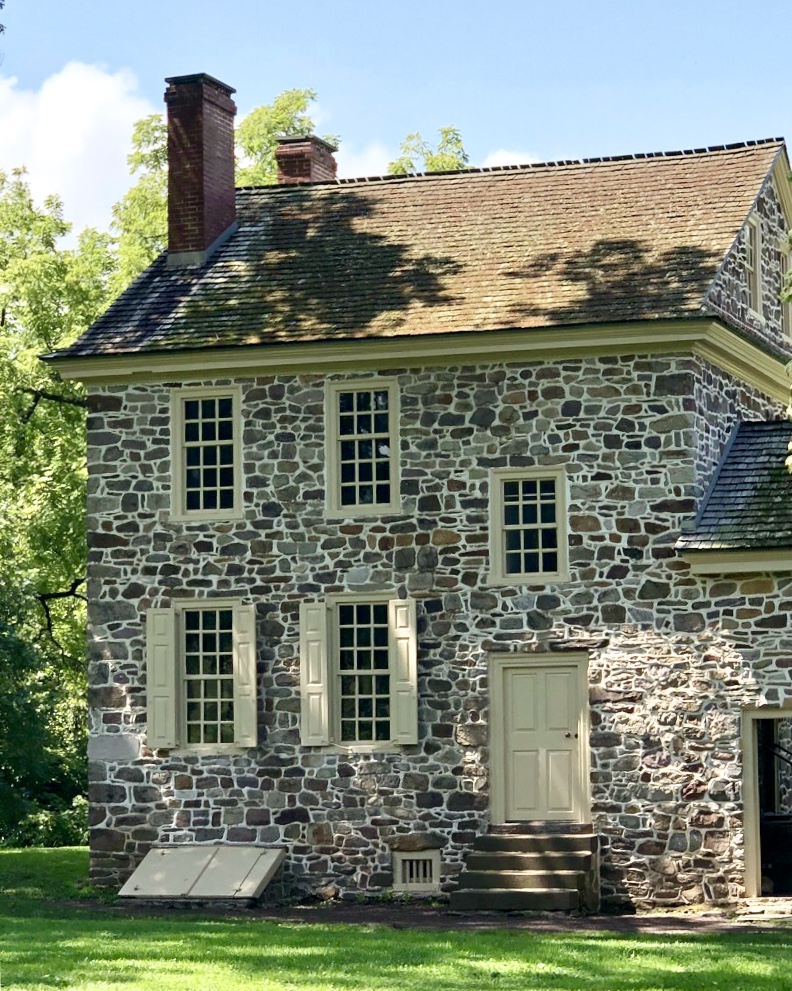 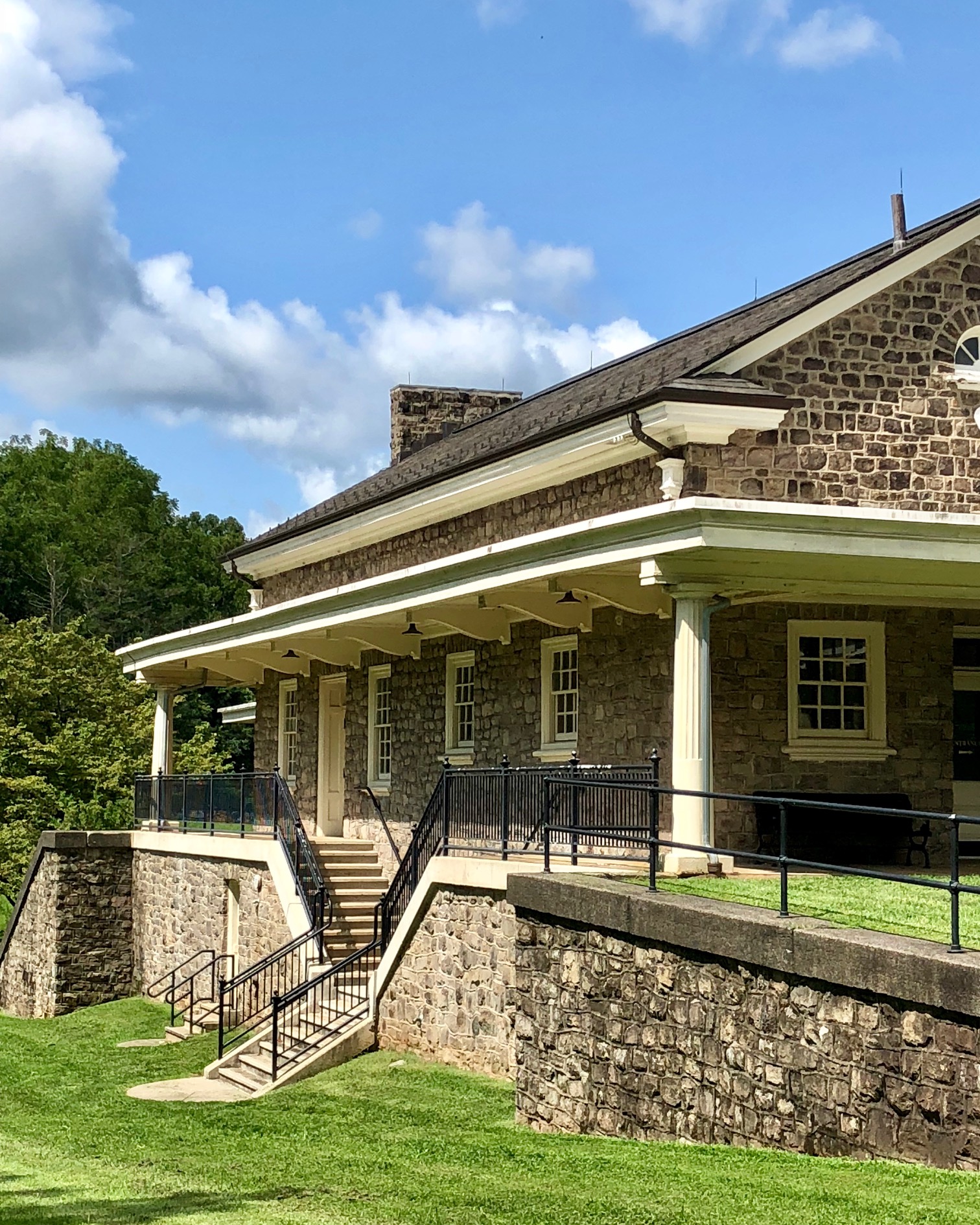 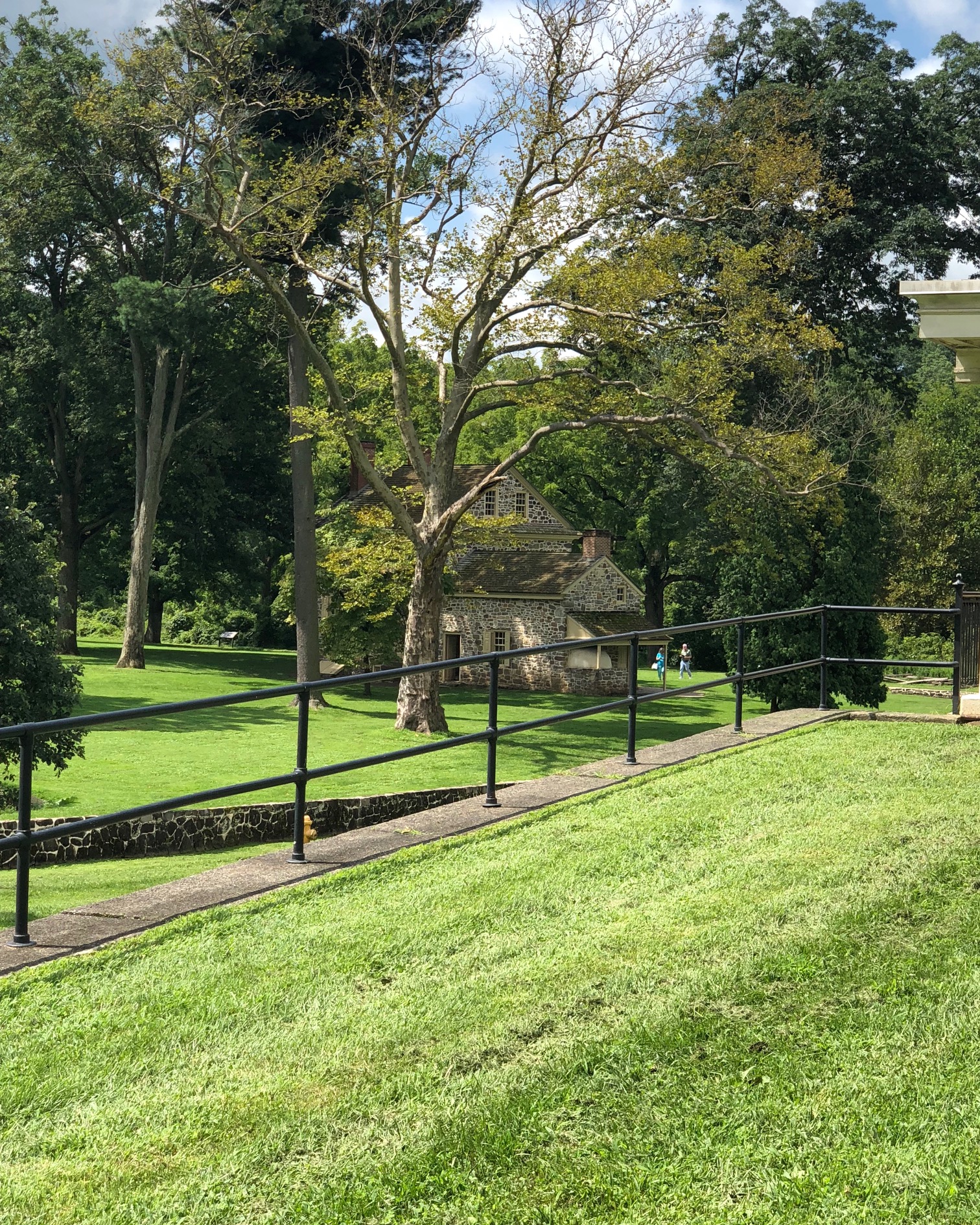 We went down the hill toward the physical headquarter’s building. There is a train station stop to look at, a few more cabins with bunks and some other sculptures around the headquarters. It’s a big space and it allowed us to throw around a ball, play frisbee and even fly multiple kites. The entire space is dog-friendly too – so be sure to bring your furry pets along! 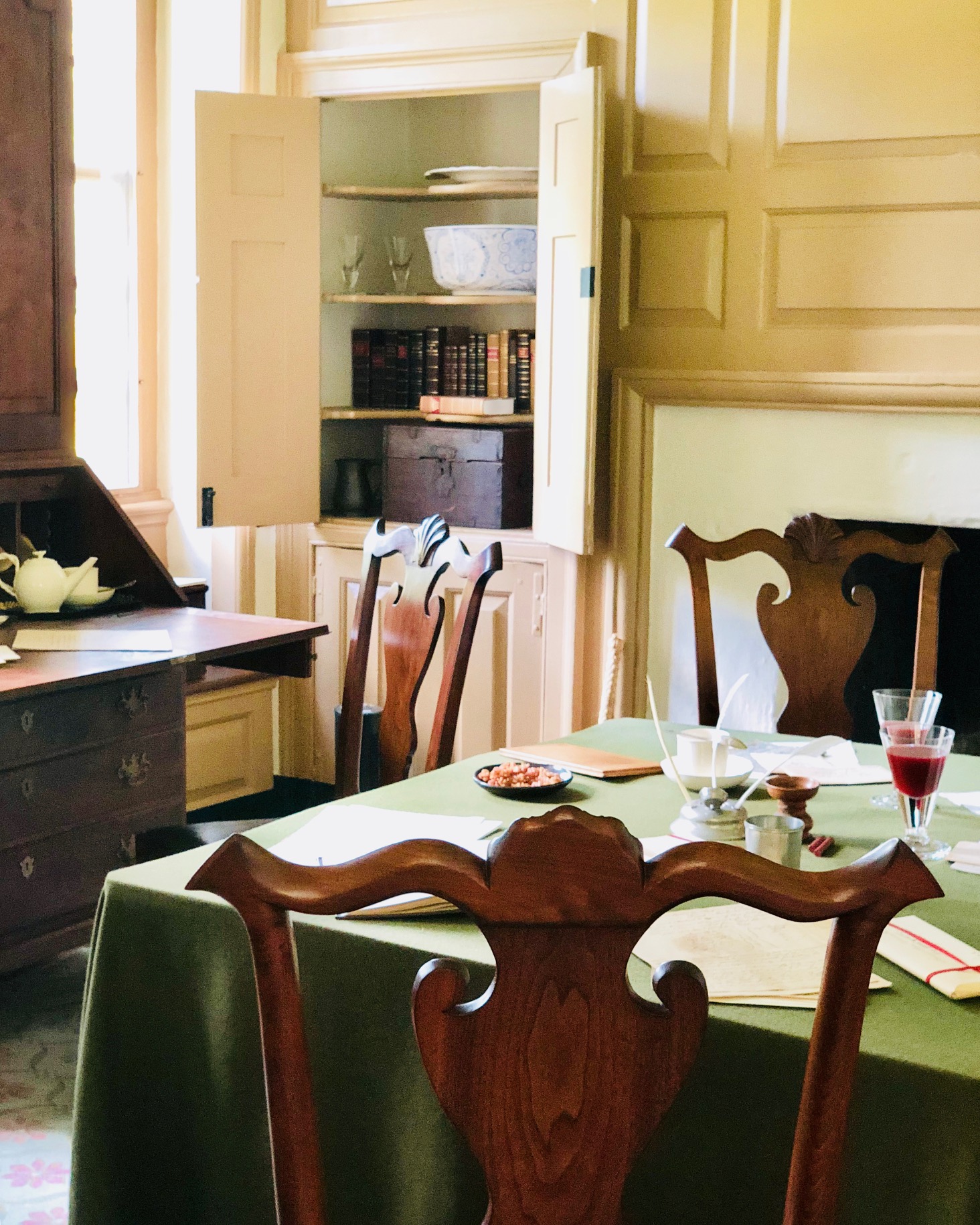 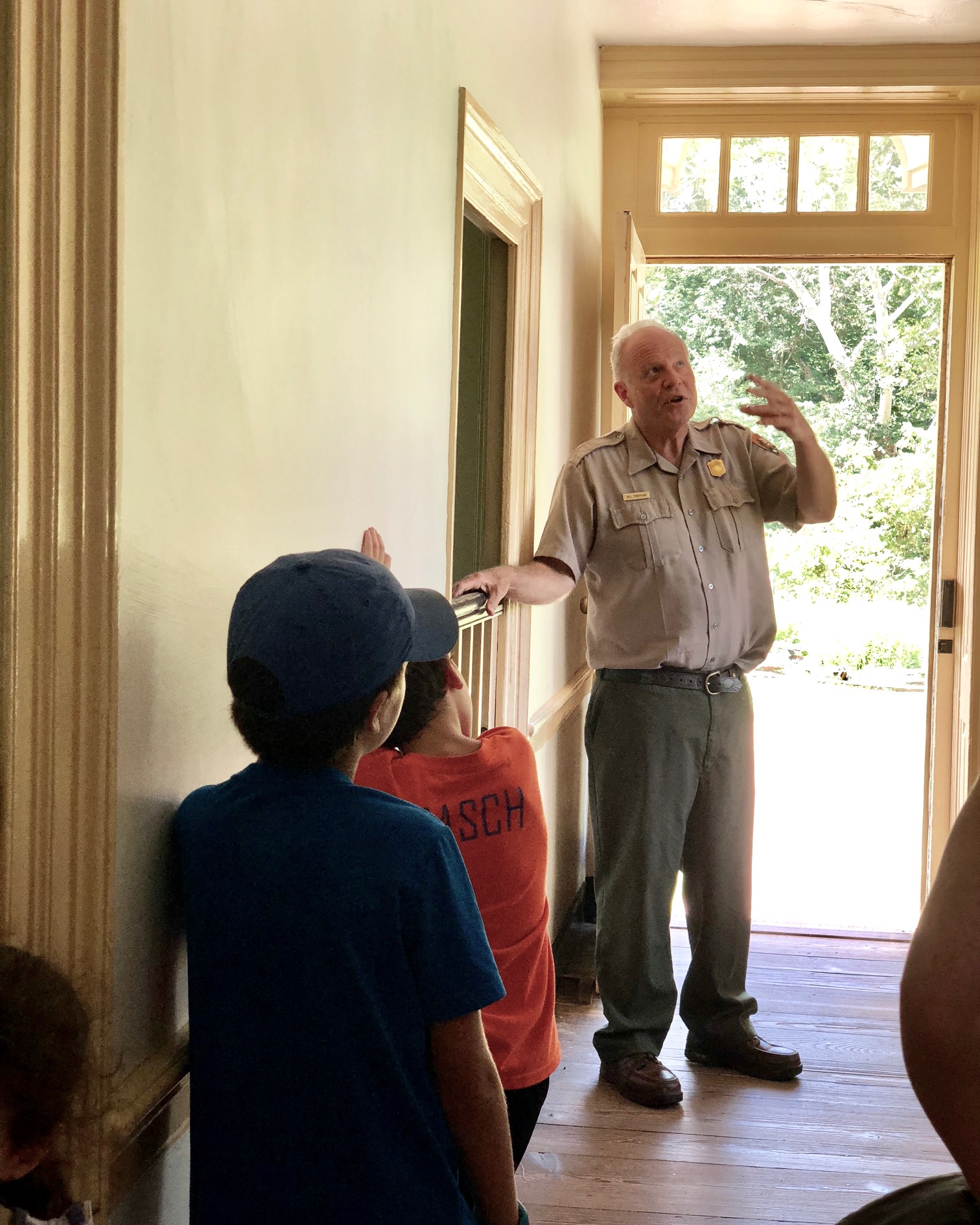 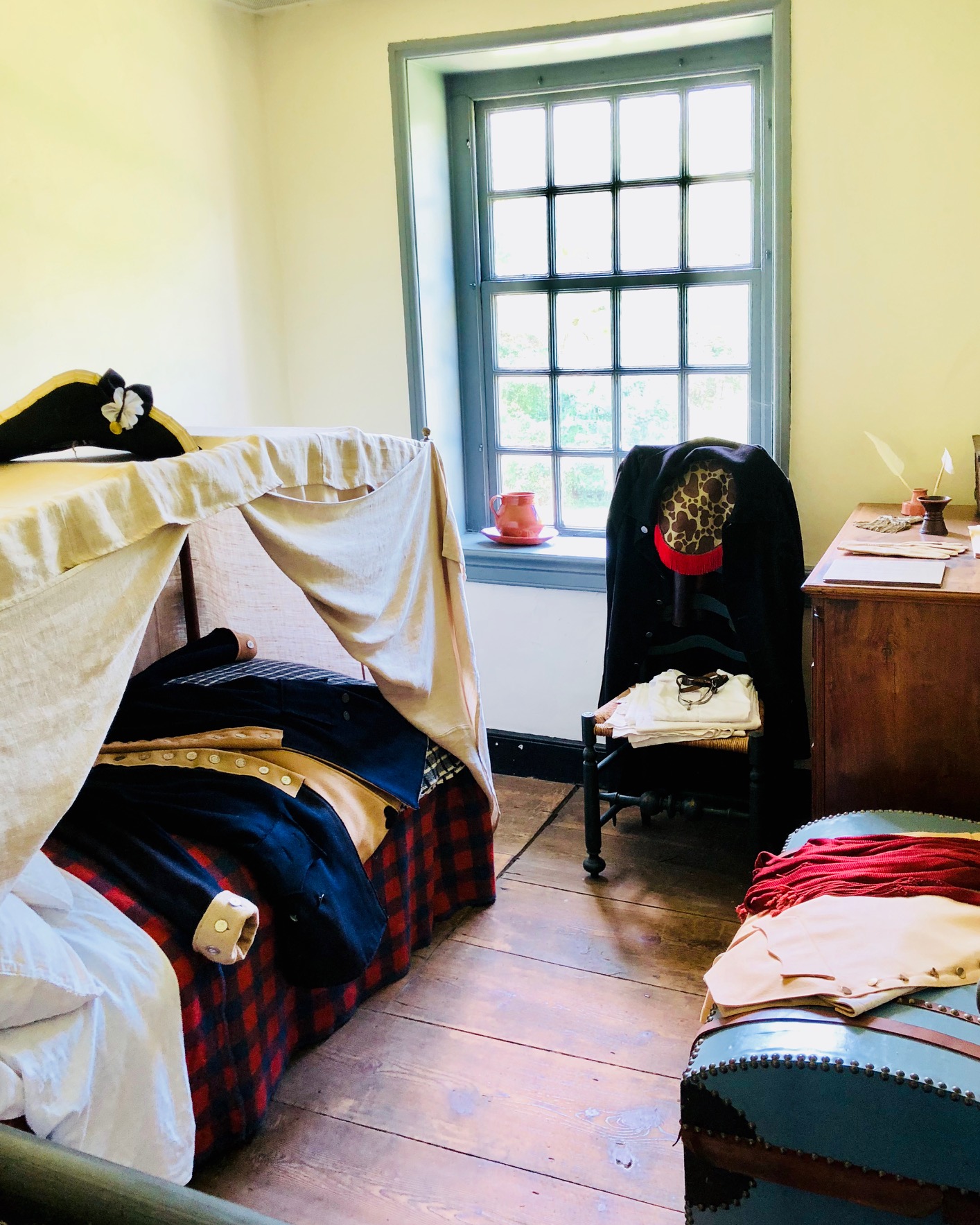 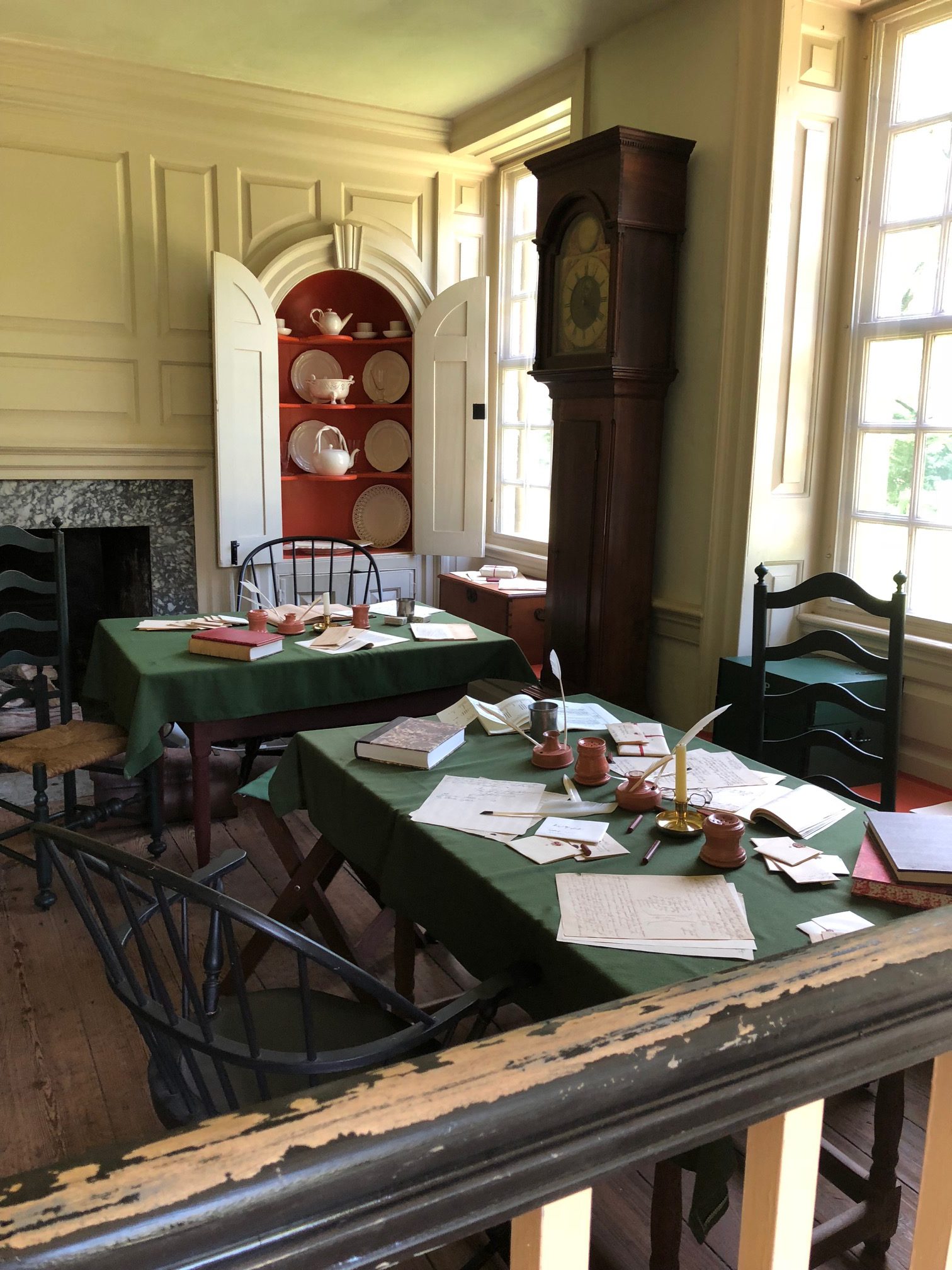 Before we got in the car to end our adventure, we toured the actual Headquarter building. There are always park rangers on duty in the house when it is open. The rooms are set-up to be historically accurate. The Rangers are an amazing resource – they know so much about the time period! I always learn something new each time I visit. 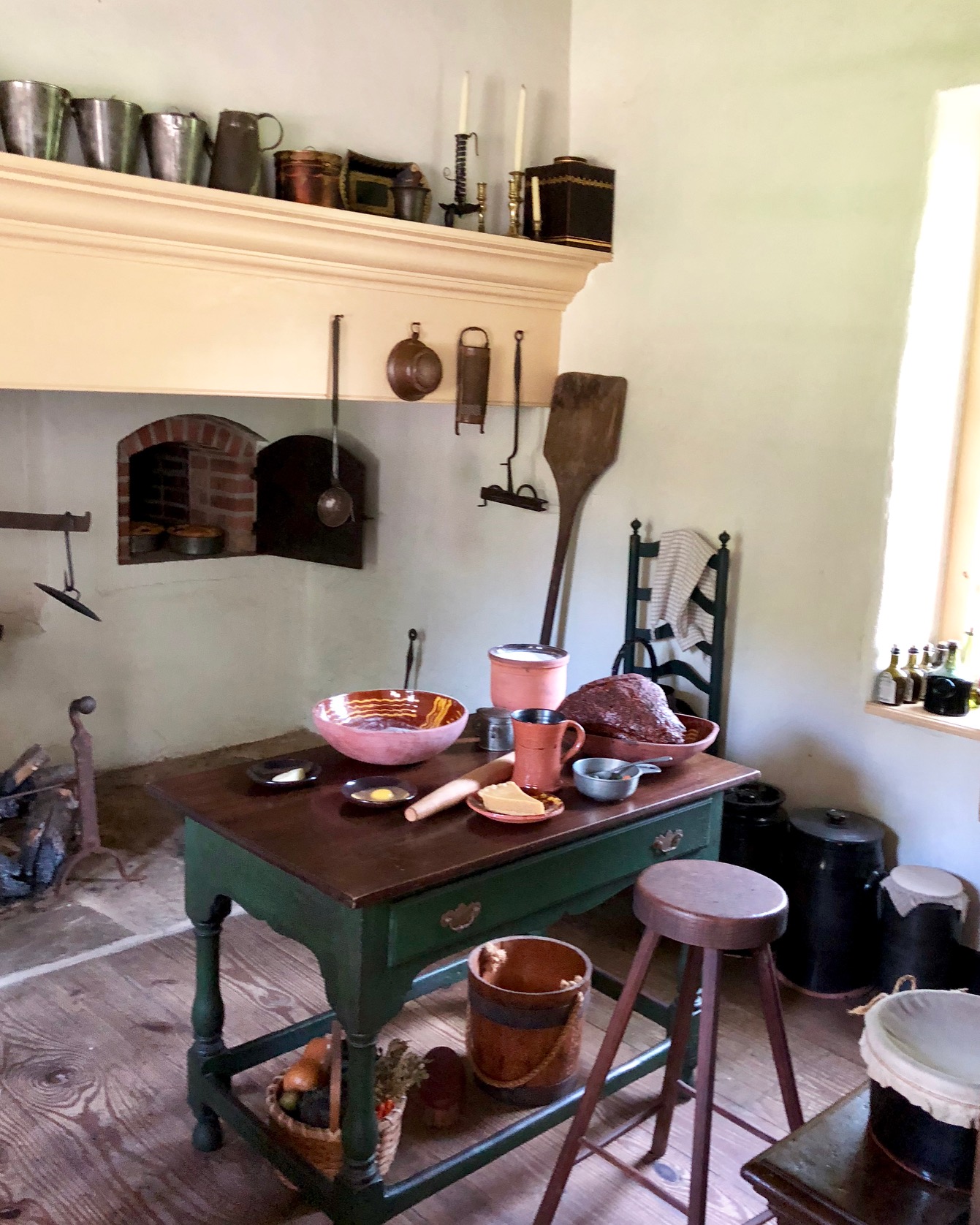 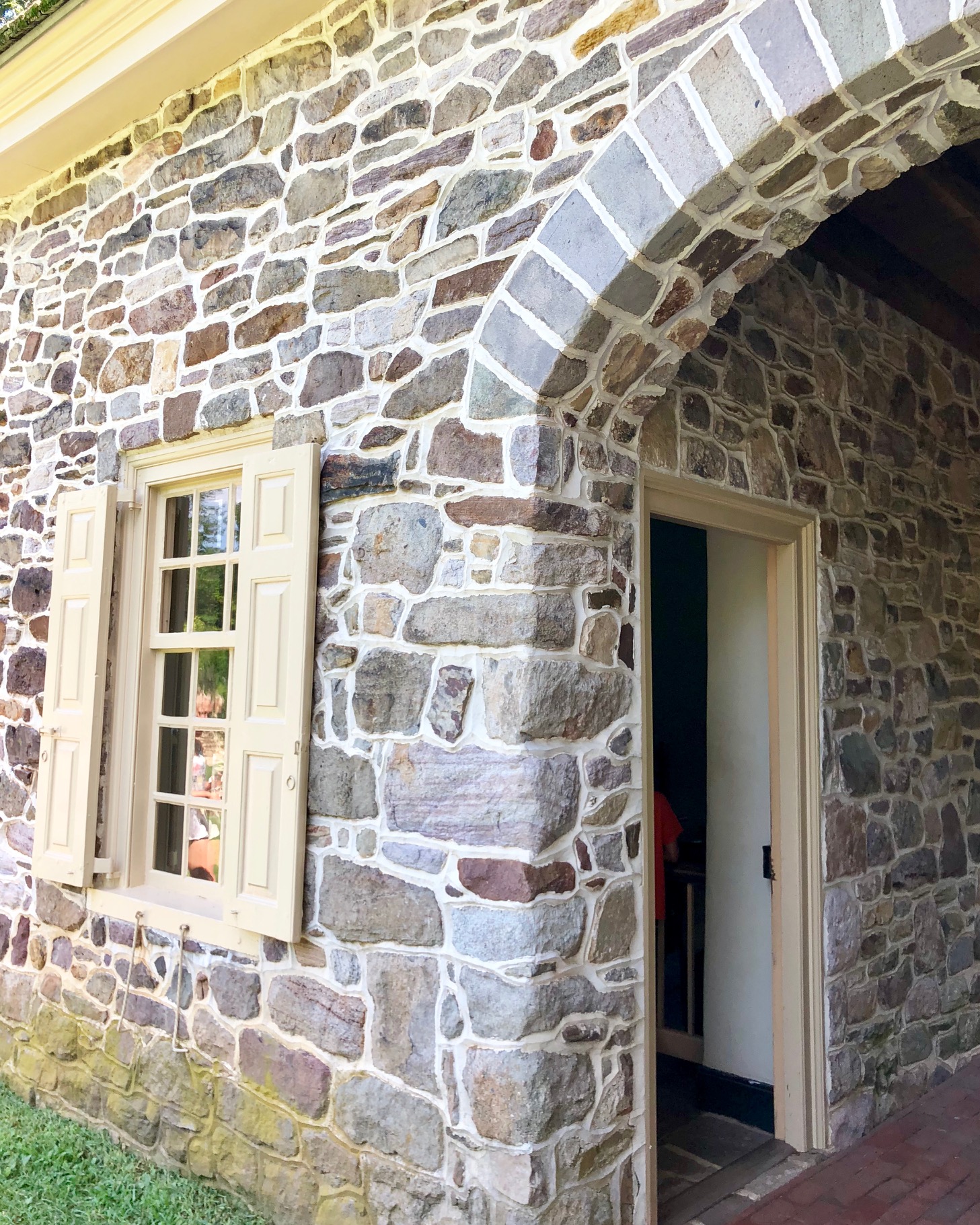 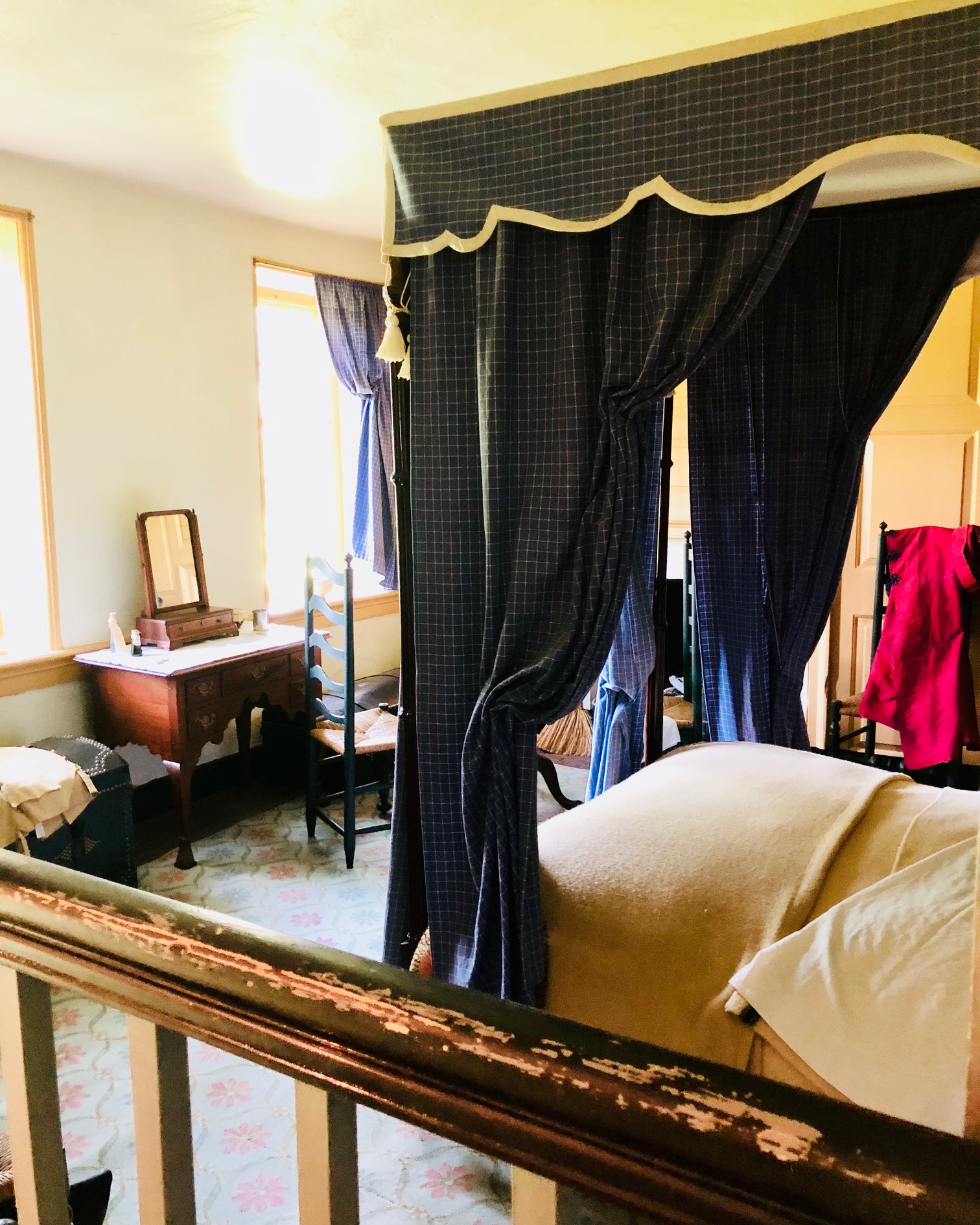 The kids love seeing the old bedrooms upstairs and going to explore kitchen which is connected to the main home by a dogtrot (a type of breezeway – that was my fact this trip!) I loved seeing the old four-poster beds and the fancy dining room. 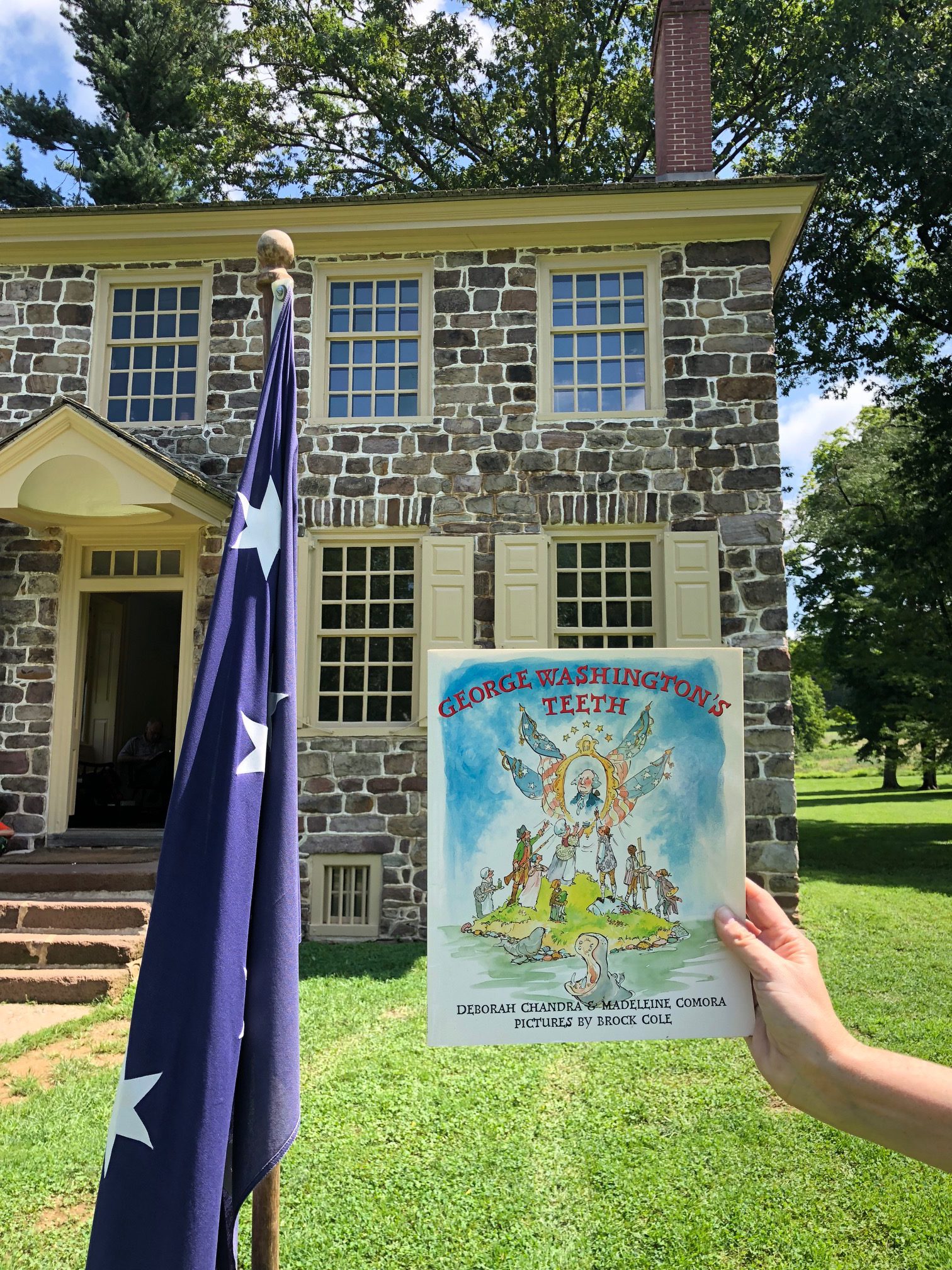 When all was said and done, we probably spent about 3 hours at Valley Forge Park. It was truly a lovely day. We brought scooters, bikes, balls, kites, and books to keep the kids occupied. I’d also recommend plenty of sunscreen, bug spray, and water! There is a spot to refill water bottles at George Washington’s Headquarters – it’s right near the bathrooms.

Why not make the experience just a tad more educational with some great books to read? Below are our favorite books about George Washington and the Revolutionary War.

Who Was George Washington by Roberta Edwards

In 1789, George Washington became the first president of the United States. He has been called the father of our country for leading America through its early years. Washington also served in two major wars during his lifetime: the French and Indian War and the American Revolution. With over 100 black-and-white illustrations, Washington’s fascinating story comes to life – revealing the real man, not just the face on the dollar bill!

I am George Washington by Brad Meltzer

We can all be heroes. That’s the inspiring message of this New York Times Bestselling picture book biography series from historian and author Brad Meltzer. Learn all about George Washington, America’s first president.

From battling toothaches while fighting the British, to having rotten teeth removed by his dentists, the Father of His Country suffered all his life with tooth problems. Yet, contrary to popular belief, he never had a set of wooden teeth. Starting at the age of twenty-four, George Washington lost on average a tooth a year, and by the time he was elected president, he had only two left!

The #1 bestselling chapter book series of all time celebrates 25 years with new covers and a new, easy-to-use numbering system!

It is a dark and snowy night when the Magic Tree House whisks Jack and Annie back to colonial times. General George Washington is about to lead his army in a sneak attack against their enemy. But now a terrible weather is making the great general question his plans. Can Jack and Annie keep history on track? The fate of the country rests in their hands!

George vs. George: The American Revolution As Seen from Both Sides by Rosalyn Schanzer

There are two sides to every story. Rosalyn Schanzer’s engaging and wonderfully illustrated book brings to life both sides of the American Revolution.

The narrative introduces anew the two enemies, both named George: George Washington, the man who freed the American colonies from the British, and George III, the British king who lost them. Two leaders on different sides of the Atlantic, yet with more in common than we sometimes acknowledge. We are lead through their story, and the story of their times, and see both sides of the arguments that divided the colonies from the Kingdom. Was King George a “Royal Brute” as American patriots claimed? Or was he, as others believed, “the father of the people?”

I Survived the American Revolution by Lauren Tarshis

British soldiers were everywhere. There was no escape. Nathaniel Fox never imagined he’d find himself in the middle of a blood-soaked battlefield, fighting for his life. He was only eleven years old! He’d barely paid attention to the troubles between America and England. How could he, while being worked to the bone by his cruel uncle, Uriah Storch?

Blistering winds. Bitter cold. And the hope of a new future. In this compelling sequel to Chains, a National Book Award Finalist and winner of the Scott O’Dell Award for Historical Fiction, acclaimed author Laurie Halse Anderson shifts perspective from Isabel to Curzon and brings to the page the tale of what it takes for runaway slaves to forge their own paths in a world of obstacles—and in the midst of the American Revolution.

An independent-minded young maid tells the story of social-climber Peggy Shippen and how she influenced Benedict Arnold’s betrayal of the Patriot forces. Revolutionary Philadelphia is brought to life as Becca seeks to find her “missing pieces” while exploring the complicated issues of the war between the impoverished independence men and the decadent British Tories. “This tale of treachery comes alive under [Rinaldi’s] pen.

Previous Post: « The Joy of Discovering a New Genre: September Reading Challenge
Next Post: 15 Book to Emotionally Wreck You »