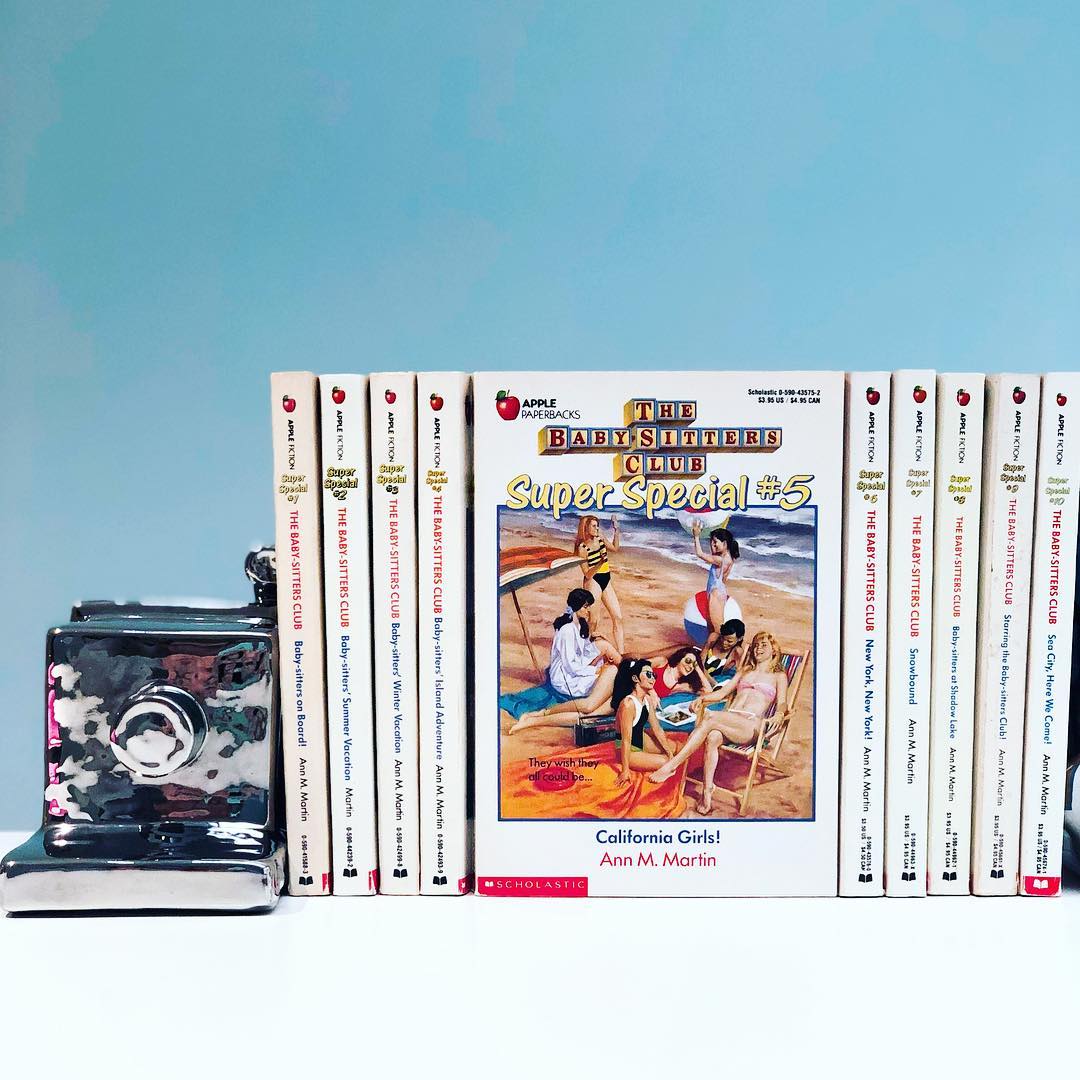 Are you ready for me to blow your mind with quite possibly the most brilliant theory ever to grace the internet? Yeah, I thought so. It all started about a month ago when I began re-reading my beloved The Babysitter’s Club book series and recapping them over on Instagram. Shortly after, I started thinking about how annoying Kristy is, and I remember thinking, ugh, she’s the Miranda of the group…and then I had the mind-blowing revelation that Ann M. Martin’s original 4 characters were the inspiration for the Sex and the City girls. Ready for some proof?

Oh Kristy and Miranda, the Debbie-Downers of the group. These two are always the first to spoil the fun with their logic and practical thinking. Miranda and Kristy have business sense. One is a successful lawyer, the other is a successful entrepreneur. Snooze.

Shall we let our good friend Miranda Priestly say a word about their fashion sense: 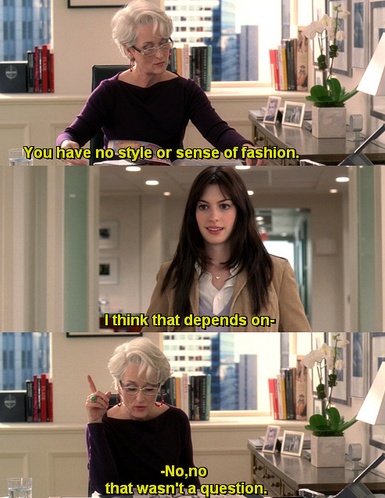 Sure, in later seasons of SATC Miranda gets more fashionable – but you know it’s because she can afford a stylist not because she’s shopping for herself. Because when she does go out on her own, it doesn’t go so well ::Cough:: Carrie’s barf-inducing engagement ring ::Cough:: .

As for Kristy, she’s wearing some fugly outfit on basically every BSC book cover unless she’s a. A Bridesmaid, b. in costume, or c. well…. actually there is no c. because she’s rocking a scrunchie every. other. time. I’ll showcase a few gems before we move on to the next duo. 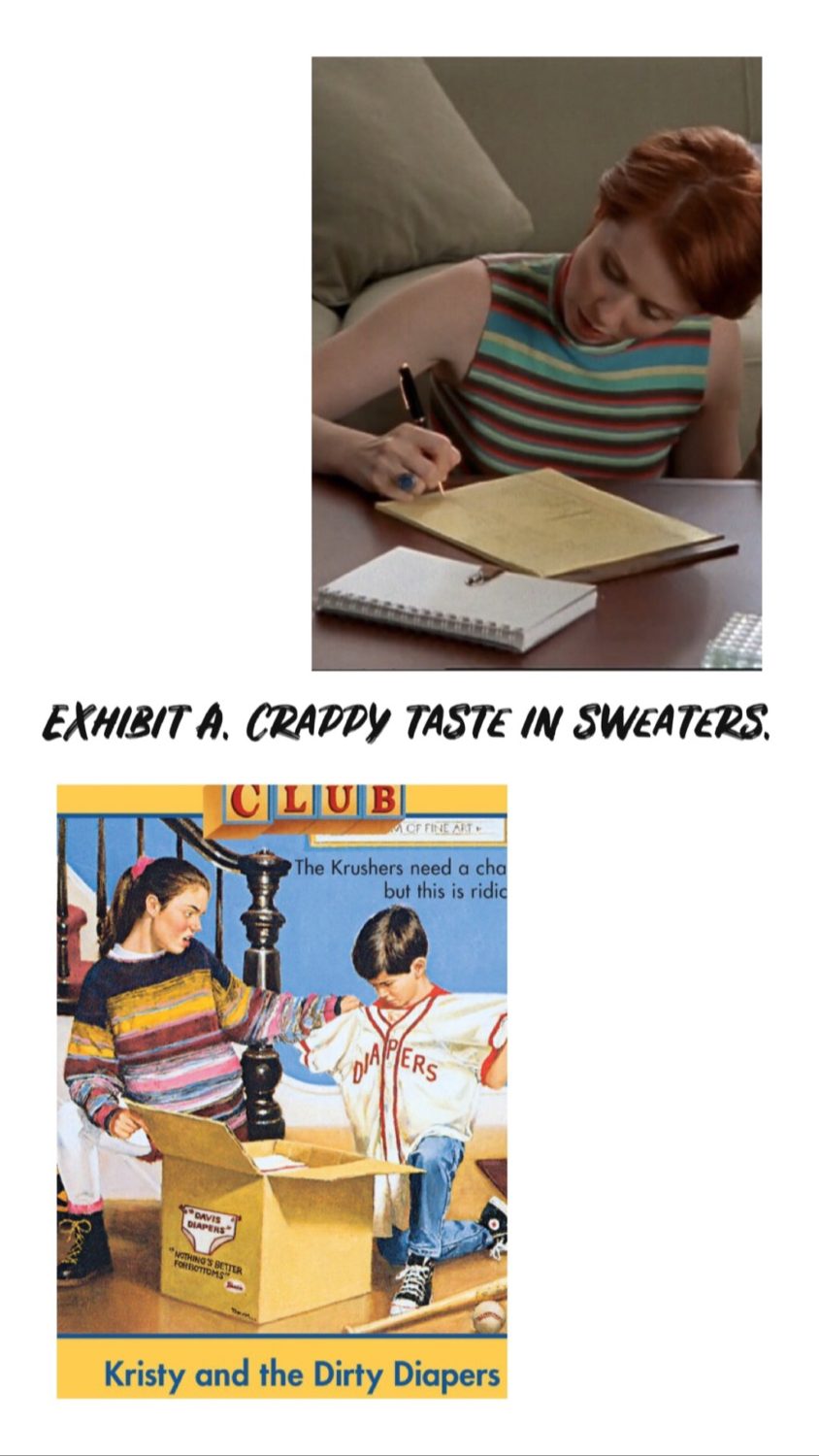 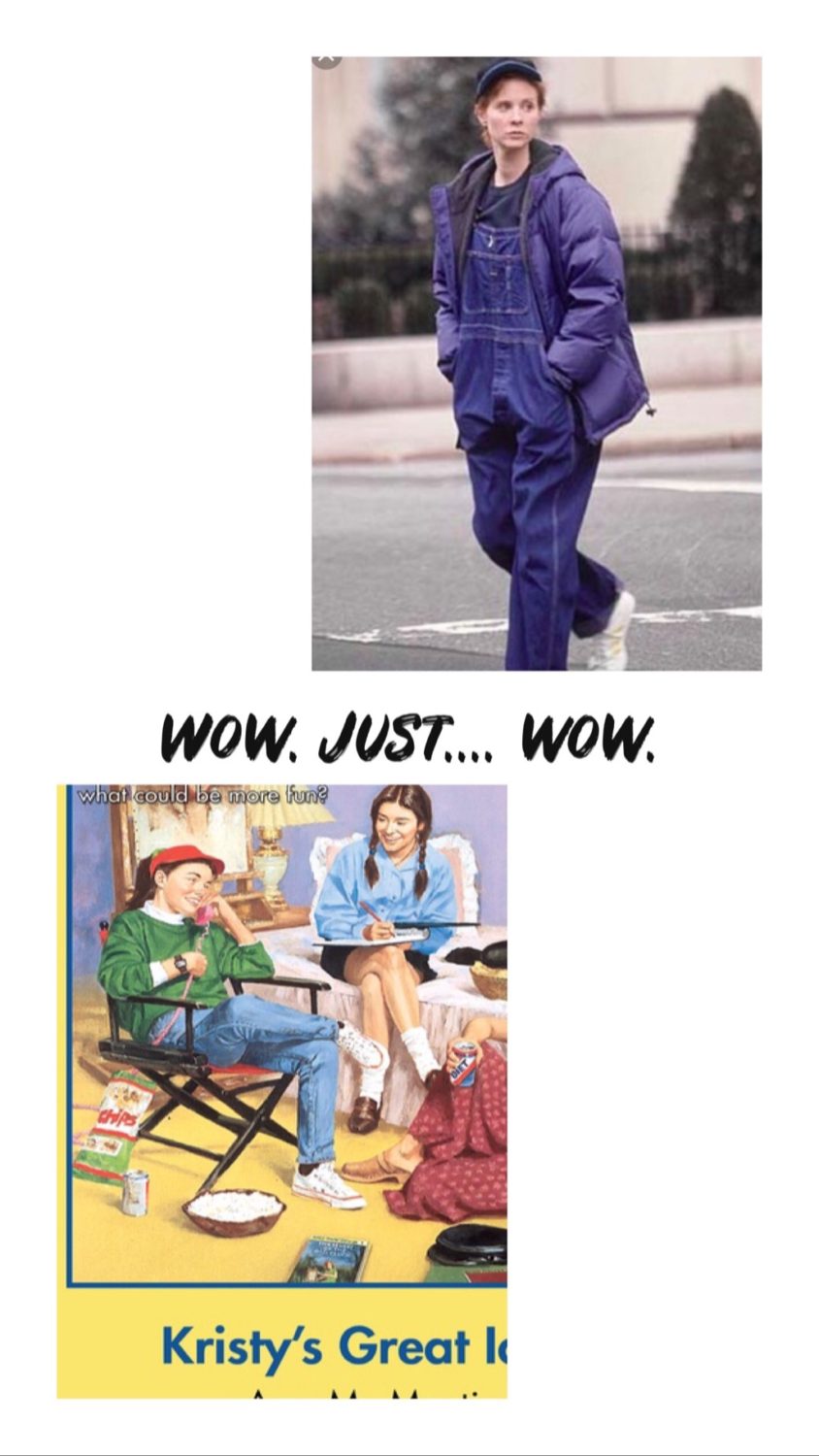 Let’s move on to the boy-crazy sluts of these series, shall we? Did anyone have plot lines that revolved around men more than Stacey and Samantha? I think not. Samantha has more boyfriends than I can recall – Smith, the short guy, Richard, the girl, the old guy (remember when Stacey had a crush on that older teacher too?) Stacey meanwhile had books such as Boy-Crazy Stacey, Stacey’s Ex-boyfriend, Stacey’s Crush…. you get the picture.

Also, these two are the only ones that get busy with their friends’ family members. Stacey has the major hots for Sam, Kristy’s older brother, while Samantha gets caught between the sheets with Charlotte’s brother – the one and only time he made an appearance on SATC. Can we have a sidebar on that plot point? Where is Charlotte’s shitty brother for both of her weddings? Why is he not mentioned literally ever again? If he’s that absent, why the hell does she care if her friend bones him?…. but I digress.

They were both the only two characters with actual health problems. No, Charlotte, your vulvodynia doesn’t count. Stacey battled diabetes with class, while Samantha took on breast cancer with such style! Their fashion sense is on point! The sexiest ladies of the bunch, these two always show up dressed to impress the men around them. Also, they don’t take shit from anyone. Period. 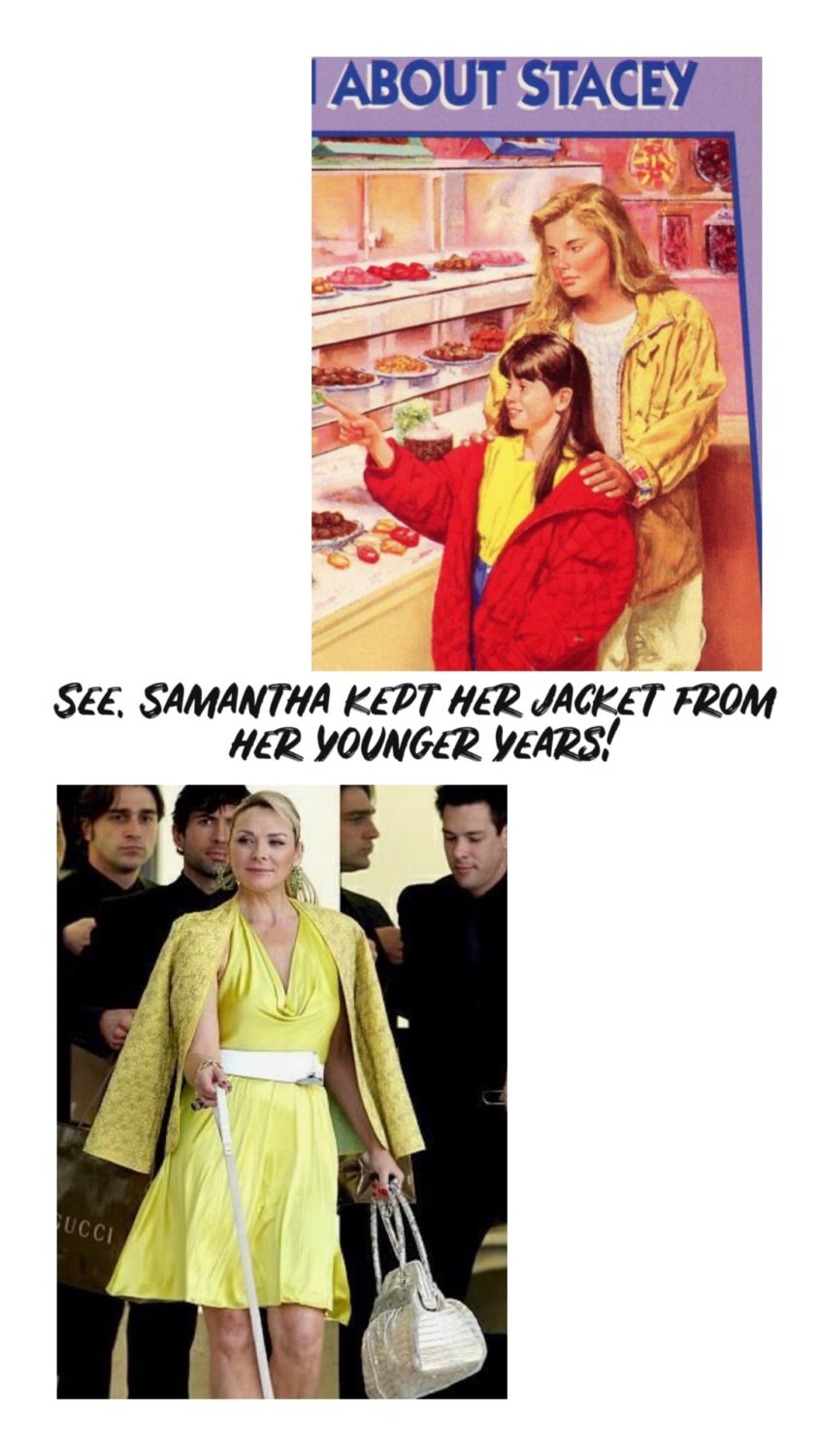 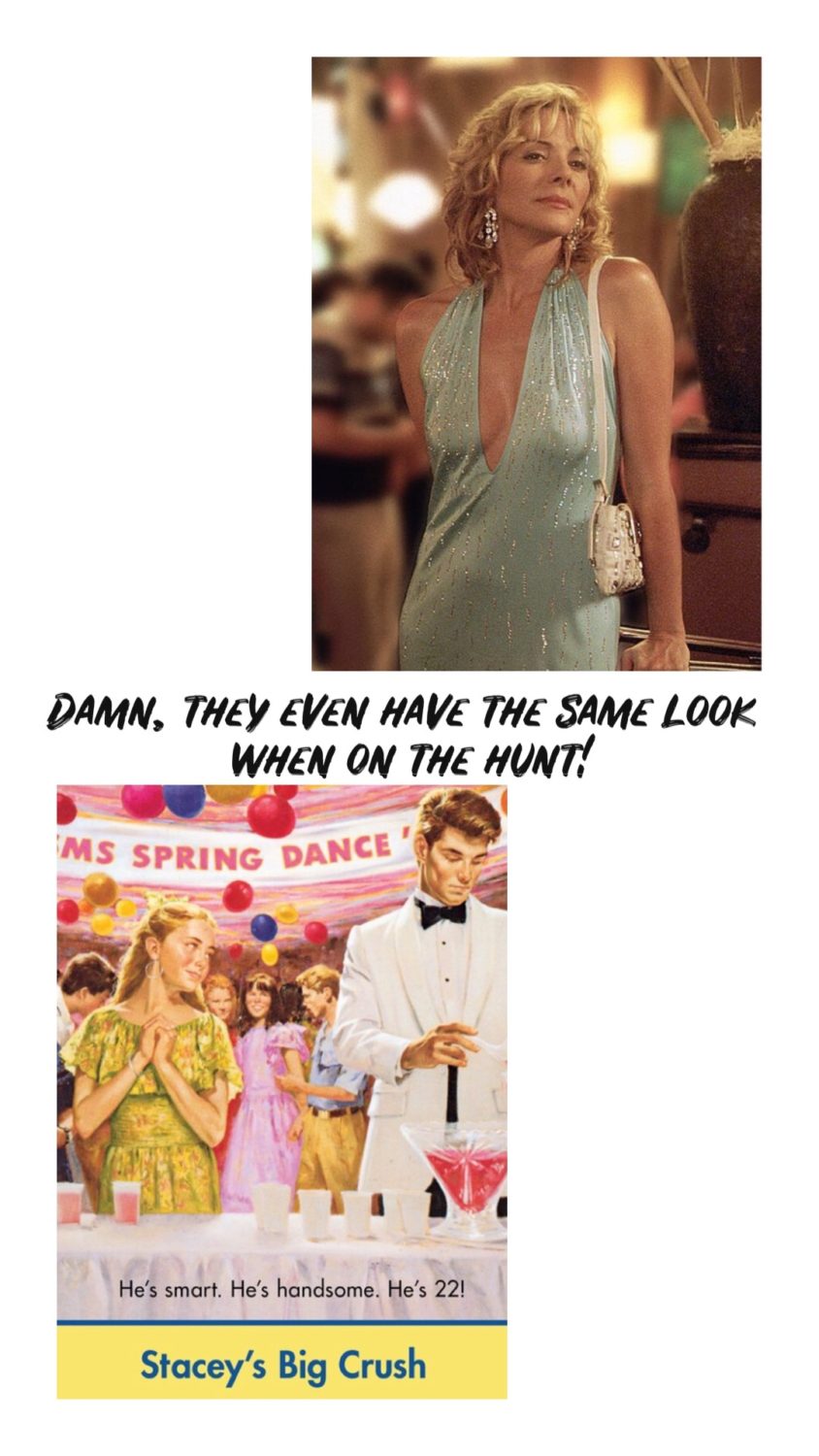 The prudish, sensible ones, who are actually the best characters of all. Mary Anne and Charlotte are true-blue friends. They put up with everyone’s shit, work to keep everyone happy, and generally provide levity with their naivete.

Arguably the two with the healthiest relationships, Charlotte and Harry are a perfect match while Mary Anne and Logan are the only serious couple in all of Stoneybrook. Sure, both couples have their break-up moments, but they come back stronger than ever. These leading men help out their friends too. Harry doles out relationship advice to Carrie post-wedding, while Logan BABYSITS when the club needs him. Saints, both of them.

Both Mary Anne and Charlotte have experience dealing with overbearing parent types too. Mary Anne’s father was notorious for being strict – forcing her to wear her hair in pigtails, refusing to let her wear anything a Catholic school girl wouldn’t wear (Charlotte can relate to being forced into plaid), and telling her she couldn’t even purchase a pizza with her hard earned dough. Meanwhile, Charlotte had to deal with Bunny McDougal. I still shudder at the thought of her walking in on Trey and Charlotte being…ahem….intimate. GROSS. 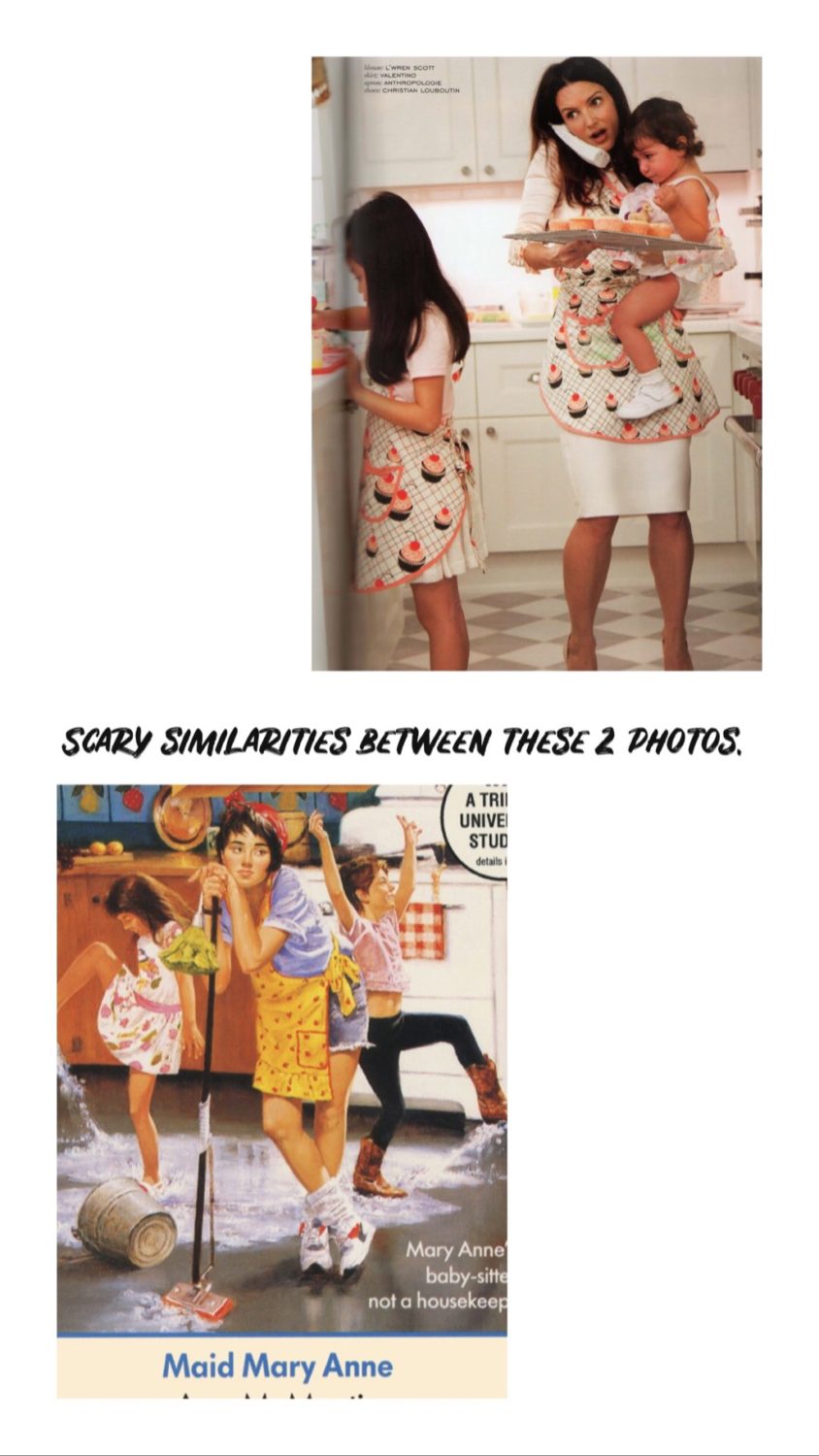 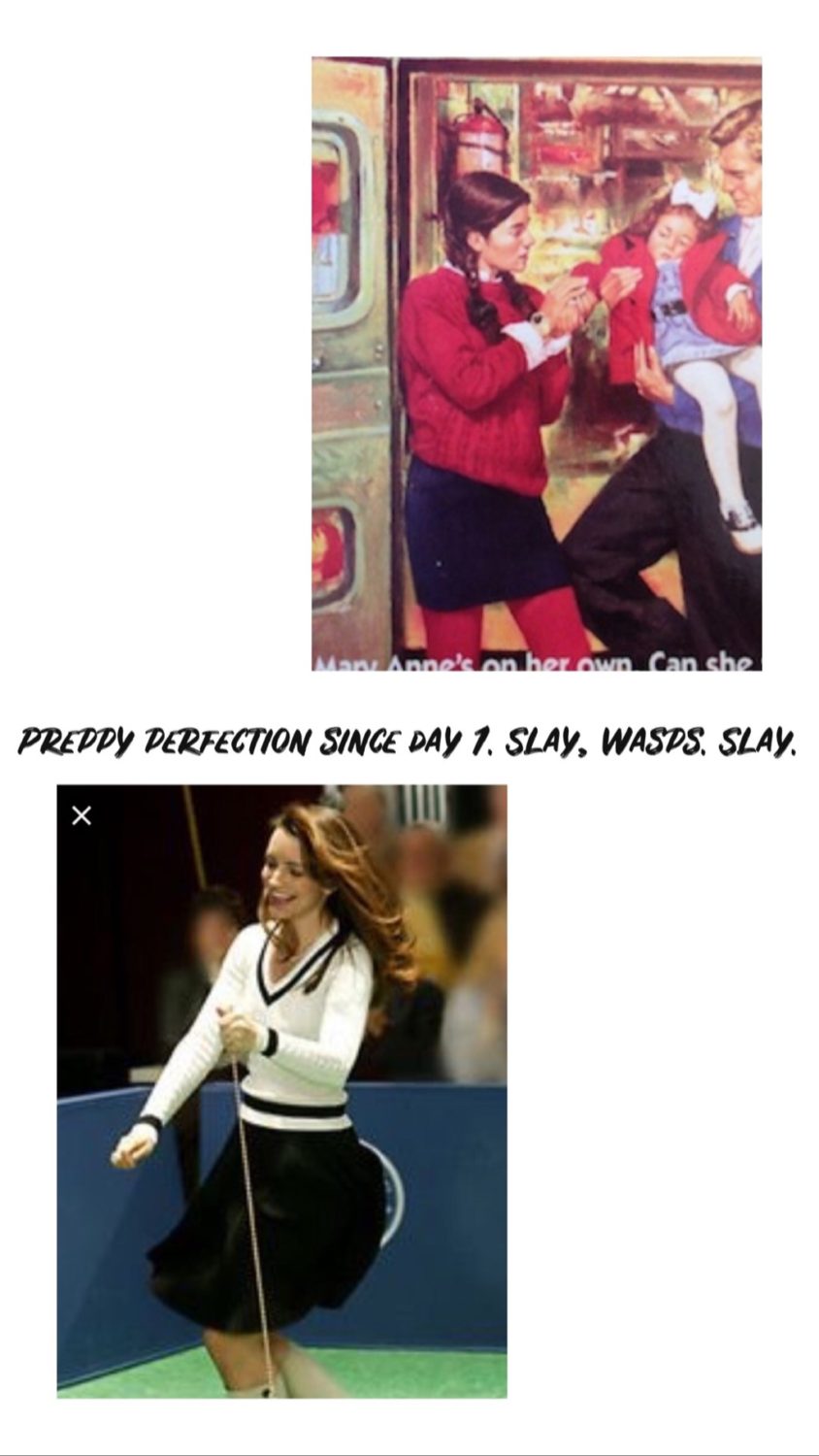 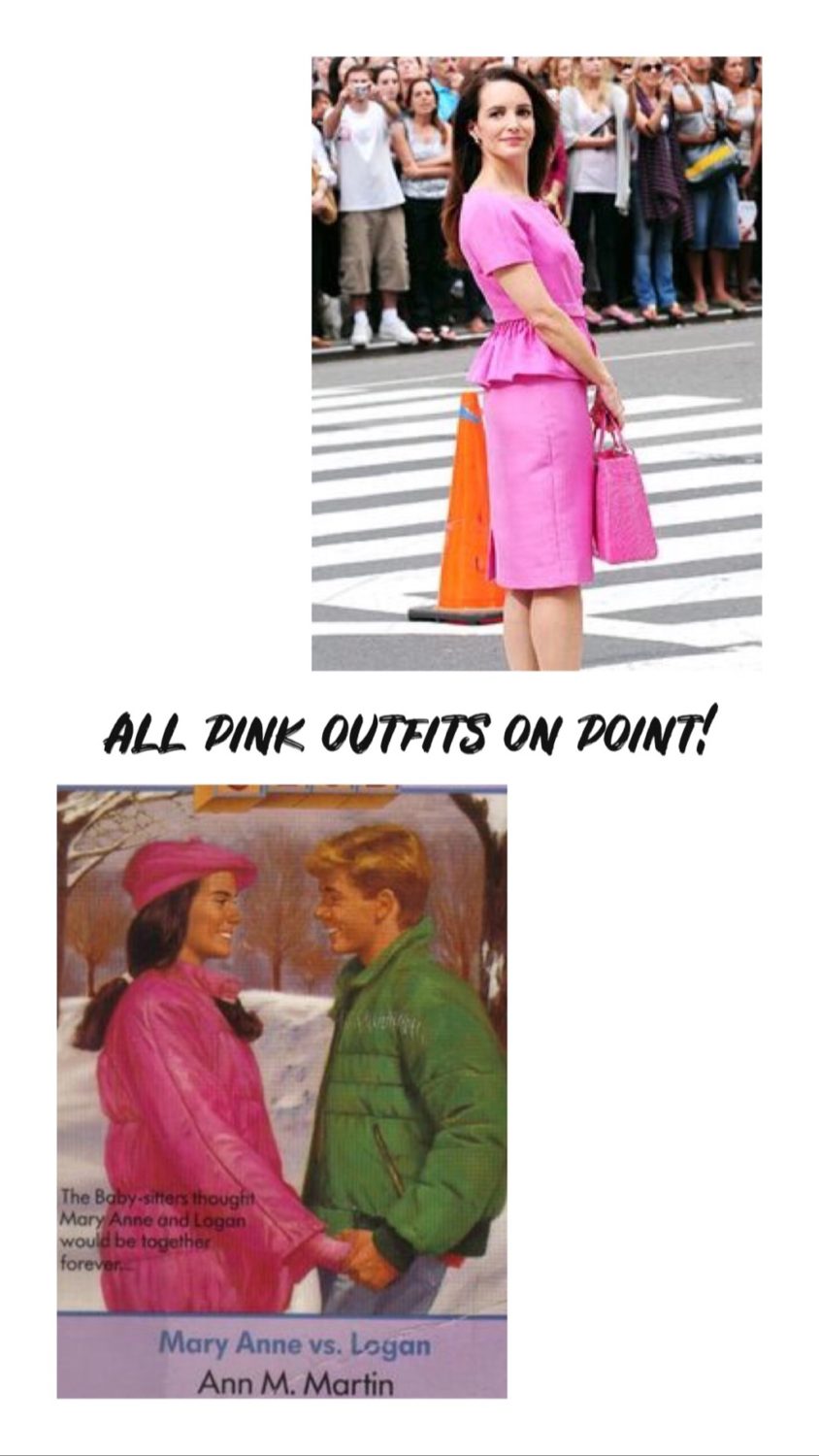 Last but not least, we have our risk takers. Claudia and Carrie are not afraid to try something new. Claudia gets a job in radio, while Carrie finagles her way into a job at Vogue. They throw parties that end in trouble – Claudia’s house gets trashed, while Carrie’s friend plunges to her death from an open window (whoops!) And they both are just a little boy-crazy.

These ladies, are also terrible at math of any kind. Remember when Claudia repeated 7th grade? Ouch. Or perhaps you recall the time Carrie tried to calculate the cost of her shoe collection and said it was $4,000, not $40,000!!!! Girl, get yo self a calculator. I know they had TI83s back then.

Claudia and Carrie are totally the creative ones in this bunch. Carrie is a successful columnist and author, while Claudia’s love of arts includes painting and pottery. But let’s be honest, their fashion sense is where their creativity really shines. 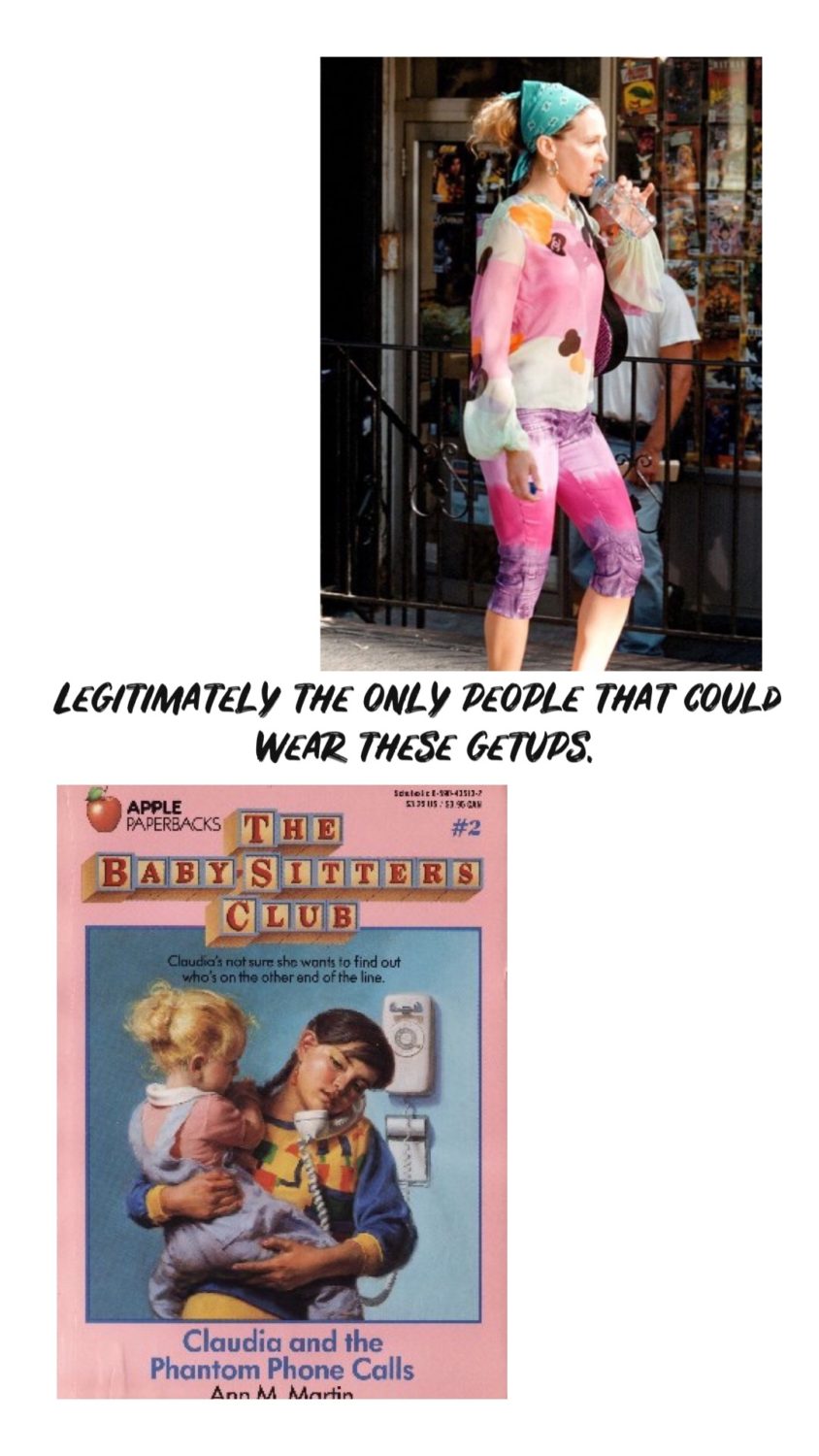 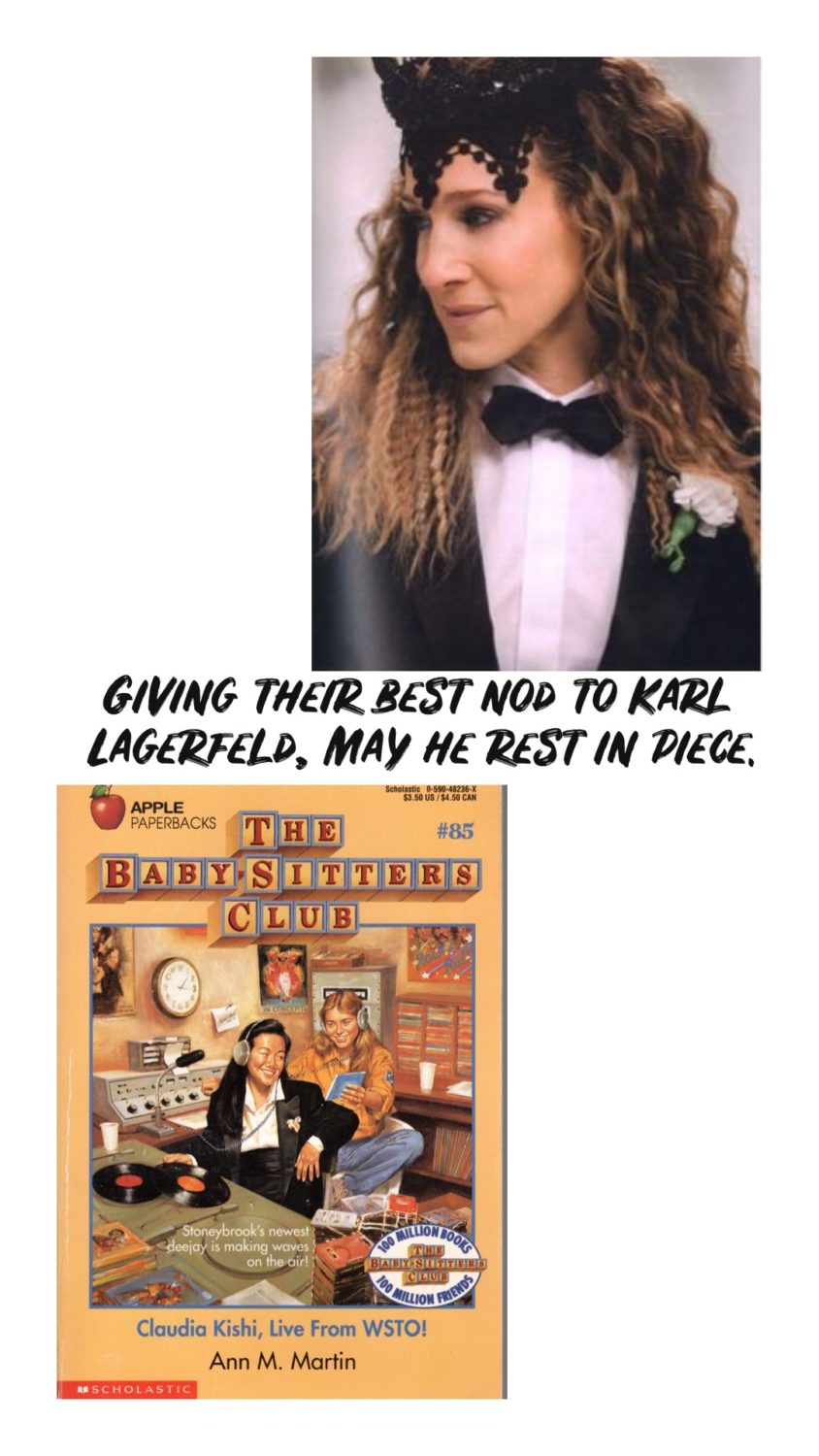 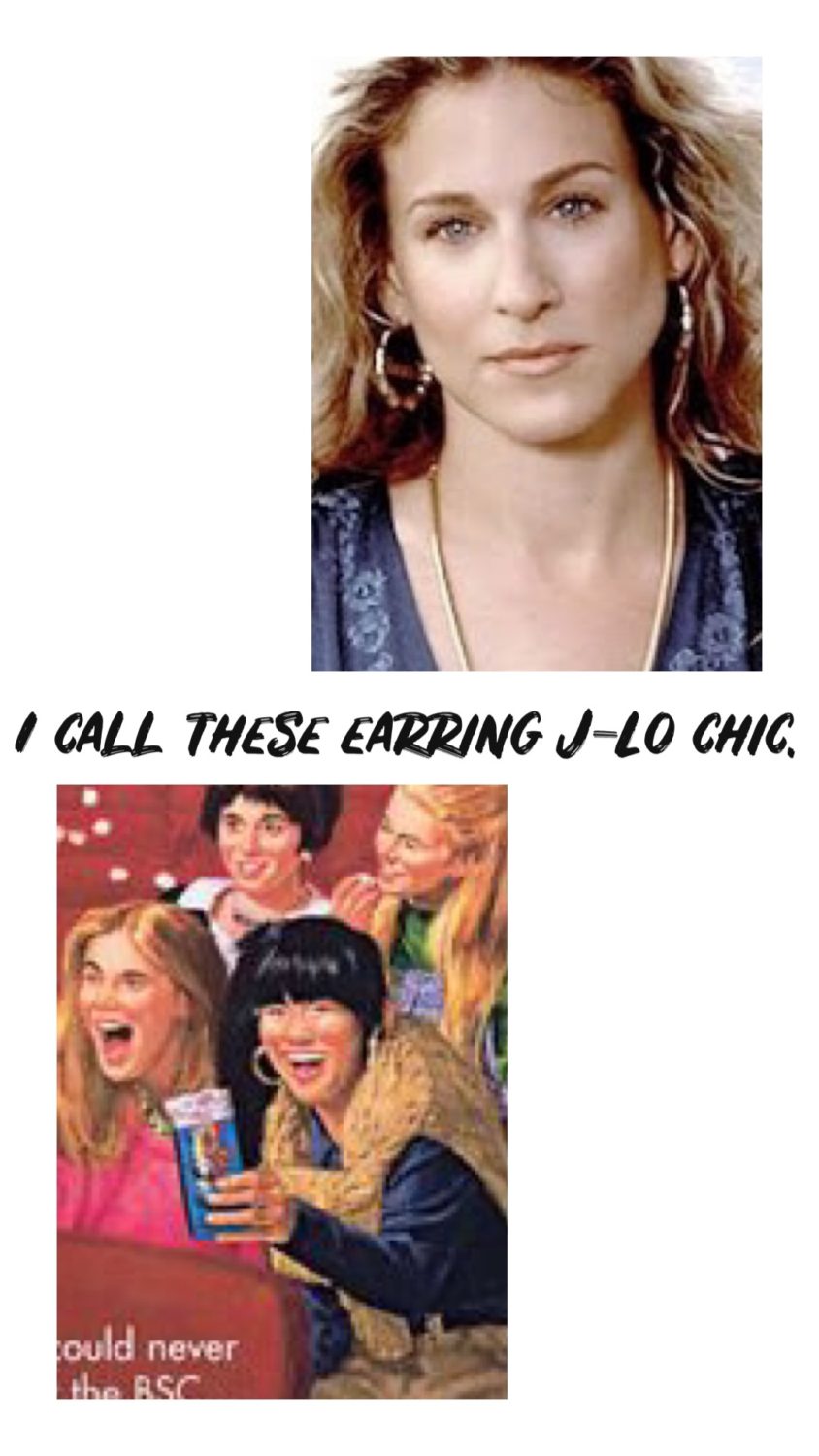 Basically, I think we can conclude one of two things. Either Ann M. Martin was a ghostwriter for HBO or Darren Star, Candance Bushnell, and Michael Patrick King have A LOT of explaining to do.

Do you agree with my theory? Do you think Ann M. Martin is secretly recruiting her old pals to help her with the new BSC reboot on Netflix? Only time will tell….but I certainly hope so!

Previous Post: « How to Host a Book Club for The Lost Girls of Paris by Pam Jenoff
Next Post: Mother’s Day 2019: The 7 Gifts Every Mom Needs »