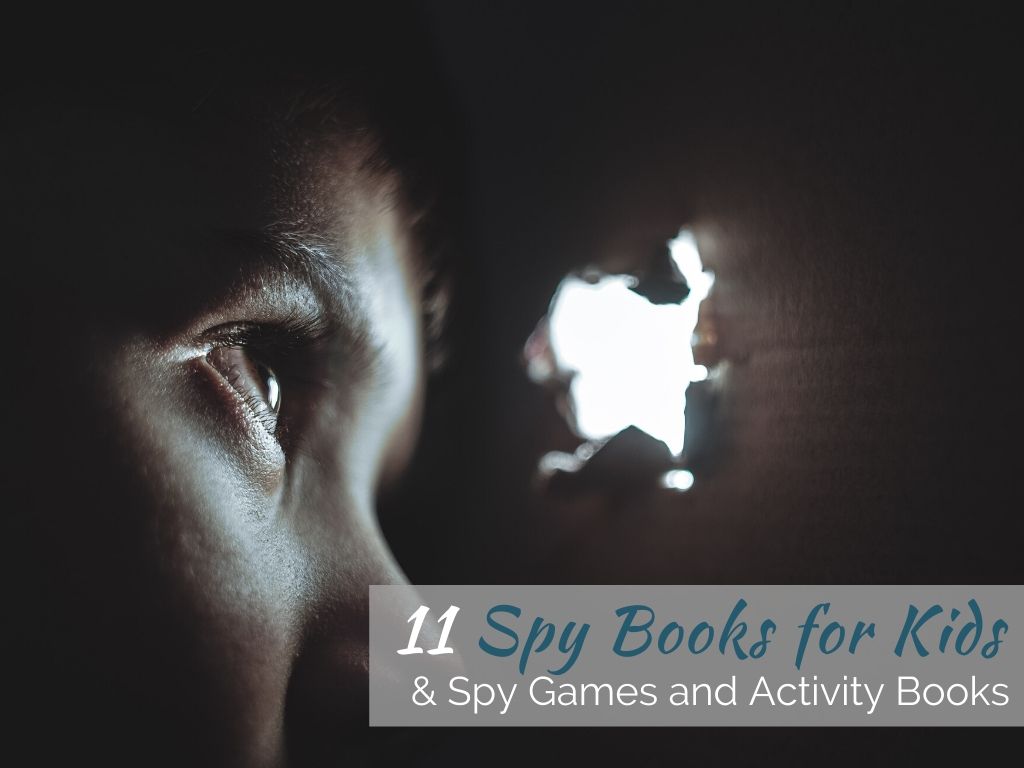 What is it about spies that captivate the imagination of children?  Maybe it’s a rite-of-passage. We went through the pirate phase, the Egyptian phase, and now we are in the spy phase. My boys have gotten into spying just recently, while Jackie’s boys have been reading spy books for years. We’ve rounded up our favorite spy books for kids and a few spy games to help continue the fun.

Olivia The Spy by Ian Falconer

Everyone’s favorite pig is about to have a birthday…but will her penchant for eavesdropping lead to more than presents?

Olivia’s birthday is days away. Plans must be made. Who makes plans? Moms! Who simply must know the plans? Olivia, who is NOT above eavesdropping. But when she not-so-accidentally-but-kinda overhears her mom talking about her not-so-squeaky-clean-and-possibly-very-bad-behavior, Olivia’s imagination runs wild…because it sounds like not only will there be no birthday, but Mom might just be sending her to military school instead. What a BAD birthday that would be!

Spy Guy: The Not so Secret Agent by Jessica Young

The Candymakers by Wendy Maas

Four children have been chosen to compete in a national competition to find the tastiest confection in the country. Who will invent a candy more delicious than the Oozing Crunchorama or the Neon Lightning Chew?
Logan, the Candymaker’s son, who can detect the color of chocolate by touch alone?
Miles, the boy who is allergic to merry-go-rounds and the color pink?
Daisy, the cheerful girl who can lift a fifty-pound lump of taffy like it’s a feather? Or Philip, the suit-and-tie wearing boy who’s always scribbling in a secret notebook? This sweet, charming, and cleverly crafted story, told from each contestant’s perspective, is filled with mystery, friendship, and juicy revelations.

They said his uncle Ian died in a car accident. But Alex Rider knows that’s a lie, and the bullet holes in the windshield prove it. Yet he never suspected the truth: his uncle was really a spy for Britain’s top secret intelligence agency. And now Alex has been recruited to find his uncle’s killers . . .

Before Mac Barnett was an author, he was a kid.
And while he was a kid, he wasa spy.
Not just any spy.
But a spy…for the Queen of England.

Harriet the Spy by Louise Fitzhugh

It’s no secret that Harriet the Spy is a timeless classic that kids will love! Every day can be an adventure if you just look carefully enough!

Harriet M. Welsch is a spy. In her notebook, she writes down everything she knows about everyone, even her classmates and her best friends. Then Harriet loses track of her notebook, and it ends up in the wrong hands. Before she can stop them, her friends have read the always truthful, sometimes awful things she’s written about each of them. Will Harriet find a way to put her life and her friendships back together?

Can an undercover nerd become a superstar agent? Ben Ripley sure hopes so—and his life may depend on it!

Ben Ripley may only be in middle school, but he’s already pegged his dream job: C.I.A. or bust. Unfortunately for him, his personality doesn’t exactly scream “secret agent.” In fact, Ben is so awkward, he can barely get to school and back without a mishap. Because of his innate nerdiness, Ben is not surprised when he is recruited for a magnet school with a focus on science—but he’s entirely shocked to discover that the school is actually a front for a junior C.I.A. academy. Could the C.I.A. really want him?

Recruited by the US Army and Navy from small towns and elite colleges, more than 10,000 women served as codebreakers during World War II. While their brothers and boyfriends took up arms, these women moved to Washington and learned the meticulous work of codebreaking. Their efforts shortened the war, saved countless lives, and gave them access to careers previously denied to them.

It’s wintertime at Greenglass House. The creaky smuggler’s inn is always quiet during this season, and twelve-year-old Milo, the innkeepers’ adopted son, plans to spend his holidays relaxing. But on the first icy night of vacation, out of nowhere, the guest bell rings. Then rings again. And again. Soon Milo’s home is bursting with odd, secretive guests, each one bearing a strange story that is somehow connected to the rambling old house. As objects go missing and tempers flare, Milo and Meddy, the cook’s daughter, must decipher clues and untangle the web of deepening mysteries to discover the truth about Greenglass House—and themselves.

ARE YOU A GIFTED CHILD LOOKING FOR SPECIAL OPPORTUNITIES?

Dozens of children respond to this peculiar ad in the newspaper and are then put through a series of mind-bending tests. (And you, dear listener, can test your wits right alongside them.)

Only four children – Reynie, Kate, Sticky, and Constance – succeed. Their challenge: to go on a secret mission that only the most intelligent and inventive children could complete. To accomplish it, they will have to go undercover at the Learning Institute for the Very Enlightened, where the only rule is that there are no rules. But what they’ll find in the hidden labyrinth of the school’s underground tunnels is more than your average school supplies.

Harry Potter and the Art of Spying by Lynn Boughey

The Harry Potter series is more than just a story about a young wizard who saves the world from He-Who-Must-Not-Be-Named. The seven-book saga is an excellent primer on spying, intelligence, and politics. Join spy novelist Lynn Boughey and thirty-six-year CIA veteran and executive director of the International Spy Museum Peter Earnest as they review the spy craft employed and celebrated in J.K. Rowling’s bestselling books. From

If your child is anything like mine, they will want to play spies immediately after finishing one of these books. Indulge their creativity with some of these amazing activity books and games.