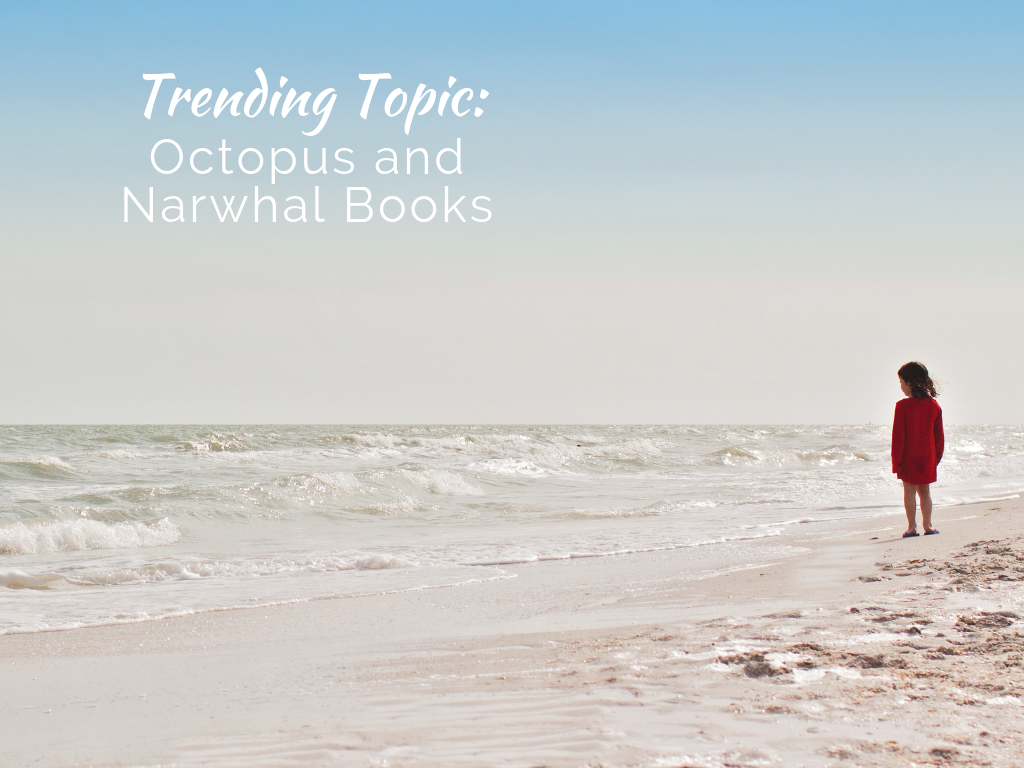 Is it just me or have you noticed the new trend in children’s books?  Narwhals and Octopuses are everywhere.  And why not? Narwhals are legitimate unicorns of the sea and octopuses (not octopi- I did look that up) have eight legs and can squish themselves anywhere.  That’s pretty cool.  So, look no further.  We have 16 books your kids (and you) will love about octopuses and narwhals.

Check out our list of shark picture books and fish books for kids!

Narwhal: Unicorn of the Sea by Ben Clanton

Narwhal is a happy-go-lucky narwhal. Jelly is a no-nonsense jellyfish. The two might not have a lot in common, but they do they love waffles, parties and adventures. Join Narwhal and Jelly as they discover the whole wide ocean together.

A wonderfully silly early graphic novel series featuring three stories. In the first, Jelly learns that Narwhal is a really good friend. Then Narwhal and Jelly form their own pod of awesomeness with their ocean friends. And finally, Narwhal and Jelly read the best book ever — even though it doesn’t have any words…or pictures!

Not Quite Narwhal by Jessie Sima

In the tradition of Uni the Unicorn and Gaston, this heartwarming and adorable debut picture book tells the story of a young unicorn who was born under the sea to a family of narwhals.

Growing up in the ocean, Kelp has always assumed that he was a narwhal like the rest of his family. Sure, he’s always been a little bit different—his tusk isn’t as long, he’s not as good of a swimmer, and he really doesn’t enjoy the cuisine. Then one night, an extra strong current sweeps Kelp to the surface, where he spots a mysterious creature that looks just like him! Kelp discovers that he and the creature are actually unicorns. The revelation leaves him torn: is he a land narwhal or a sea unicorn? But perhaps, if Kelp is clever, he may find a way to have the best of both worlds.

Wendell the Narwhal by Emily Dove

Everyone in the ocean can make music, except for Wendell the Narwhal. His big, pointy horn can’t go “pop” or “clappy clap clap” or even “whoosh”. Will Wendell find a way to join in with symphony of sea creatures?

“The little narwhal from Strictly No Elephants gets her own story…Equally good as a stand-alone or for fans of the first book.” —School Library Journal

In this charming companion to the award-winning picture book Strictly No Elephants, a tiny narwhal discovers that sometimes the difference between staying home and a big adventure is a group of loving friends.

Adventures of Miki the Narwhal by Joseph Pro

The story of how a little narwhal’s quest for adventure gets him into trouble. Remembering what his father told him, he finds the courage to get out of a dangerous situation and return to the safety of his family.

Narwhal doesn’t think she has any skills – especially when she compares herself to the mermaids. She’s just Narwhal! So when the mermaids need someone to judge their painting contest, Narwhal doesn’t think she can do it. But the other creatures don’t judge it fairly, and Narwhal soon learns that her talents lie in being honest, fair-minded and just.

Sweet, rhyming text and Lara Ede’s beautiful illustrations combine to make a delightful picture book that will be enjoyed by adults and children alike.

I heart Narwhals by Jessie Eckel

Go on a delightful adventure in an undersea world brimming with adorable narwhals and their companions. Children and adults alike can color one of the ocean’s most mysterious animals and bring these legendary creatures, with their sword-like tusks, to life. Part of the popular I Heart Coloring series, this book is the perfect purchase for any narwhal lover and is sure to be a whaley good gift.

This Narwhal book trend has converted into other fun things for kids. Headbands, squishy plushes, horn-shaped sidewalk chalk, even a tea strainer! The backpack and nightlights are what stole my heart though. Those little purple faces!

Eight twisty, twirly arms make Octopus really good at tickling. But most of his friends are beginning to find his tickling tiresome, especially when one teeny, tiny tickle lands Octopus in BIG trouble! Octopus tickles Oyster and causes her to lose her precious pearl. How will Octopus get it back?

While searching for a meal, a hungry octopus encounters hazards and opportunities, and displays a dazzling array of defensive devices including jet propulsion, clouds of ink, extreme camouflage and mimicry, even sacrificing a limb if necessary. “Explore More” sections for kids and adults offer information and activities on the adaptive behavior of these very intelligent creatures.

Take Your Octopus to School Day by Audrey Vernick

When it comes to show-and-tell, Sam is in it to win it. But no matter how hard he tries, one of his classmates is always showing him up with a slightly better costume or a slightly cooler object to share. His teacher says it’s not a competition, but just once Sam would like to be the best–which is why he’s so excited when Take Your Octopus to School Day is announced. Sam is pretty sure he’s the only kid with a real live pet octopus to bring, and Thurgood, his eight-tentacled best friend, is excited too. Together, they prepare Thurgood’s travel tank and get ready for a school day like no other. . . . What could possibly go wrong?
Sprinkled with sly humor and scientific facts about the class Cephalopoda, readers who loved Flora and the Flamingo or Sparky! will want to get their tentacles on Take Your Octopus to School Day.

An Octopus is Amazing by Patricia Lauber

“[Here is] a charming introduction to the truly amazing octopus [from its intelligence to its ability to change colors to the camouflaging black ink it squirts to escape predators]. Lauber’s chatty, fact-filled text makes the book a good read-aloud, and Keller’s amusing and colorful drawings enhance it—a perfect match of text and illustration.” —SLJ.

Children’s Books of 1990 (Library of Congress) 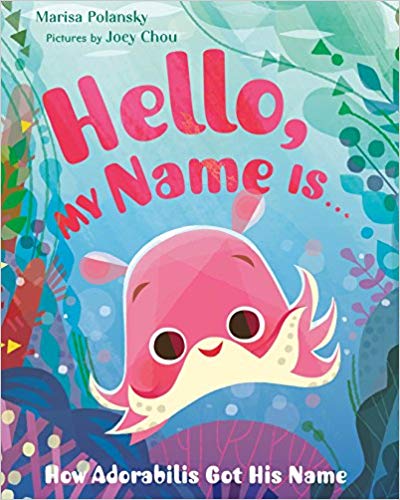 Hello, My Name is…. by Marisa Polansky

(Named one of the best Kids Books of 2018) Inspired by a true event! In the summer of 2015, an adorable new species of octopus was discovered on the ocean floor―this picture book story imagines how this cute creature got his name.

Deep down in the water lives an octopus small enough to fit in the palm of your hand. But he doesn’t have a name! Anglerfish is named for his hook like an angler, Mimic Octopus for her ability to change shape and color, and Giant Squid is GIANT! But this little guy doesn’t have the same abilities as the other creatures. What could his name be? With Marisa Polansky’s sweet text and Joey Chou’s dynamic illustrations, Hello, My Name Is… imagines how the cutest creature in the sea got his name. The story includes a note from a scientist about the naming process and more information about Adorabilis.

Come sing and dance around in an octupus’s garden in the shade! The classic Beatles song comes to life with colorful illustrations from bestselling illustrator Ben Cort and a CD with a new music recording and audio reading from stellar musician Ringo Starr.

Who wouldn’t like to visit an octopus’s garden? Well, now you can! This lively picture book, complete with a CD of the beloved song, brings Ringo Starr’s joyful underwater tale to life and is perfect for reading, sharing, and singing again and again.

Cowboy and Octopus by Jon Scieszka

Peanut butter and jelly. George and Martha. Frog and Toad. Cowboy and . . . Octopus? Yes, that’s right. Meet Cowboy and Octopus—the next great pair to become a household name. Cowboy likes beans’n’bacon and bacon’n’beans. Octopus eats raw seafood. Octopus prefers knock-knock jokes, but Cowboy doesn’t get them. How will these two ever be friends?Hello, My Name Is… by Marisa Polansky

The Fearless Octopus by Jellycat

Join Oscar as he introduces preschoolers to the months of the year, texture, colors, and fascinating sea creatures. The cleverly textured pages will tickle fingertips and funny bones while revealing clues to what Oscar will catch next from a shiny friend to a surprise pop-up ending!

Meet cuttlefish that can camouflage themselves, octopuses that outsmart their predators, and squid that patrol the deep in this cool fact-filled reader.

Learn everything you’ve ever wanted to know about cephalopods, from inking, to hunting, to coconut carrying. Squish along with squid, camouflage with cuttlefish, and marvel at magnificent octopuses. Packed with weird-but-true facts and tons of cool animal info, this Level 3 Reader explores the incredible world of cephalopods.

National Geographic Fact Readers feature the same expert-vetted running text as traditional readers–with a bonus of 100 fun facts sprinkled throughout! A fact roundup at the end of each book lets kids review what they’ve learned. (Plus, they can impress their friends with their animal expertise!)

Ok, you know a trend is HUGE when GUCCI is making bags and bibs shaped like Octopuses. I had to include them below because they are so over-top. But Crate and Barrel has a whole line of octopus toys, Hannah Anderson made a costume, and did you see those incredible bookends? It’s safe to say that Cephalopods haven’t had this much play since Jules Verne’s 20,000 leagues under the sea. 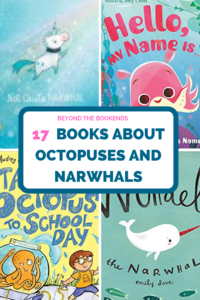 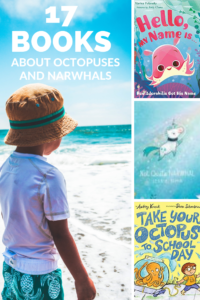 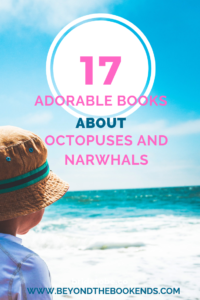 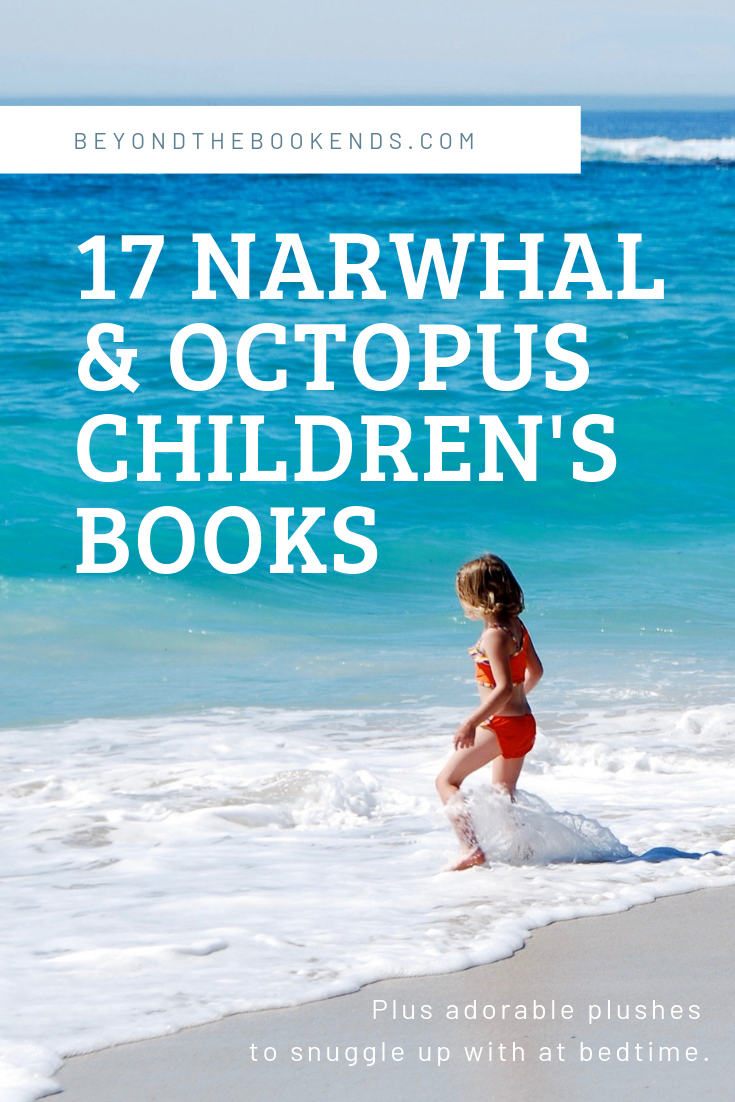