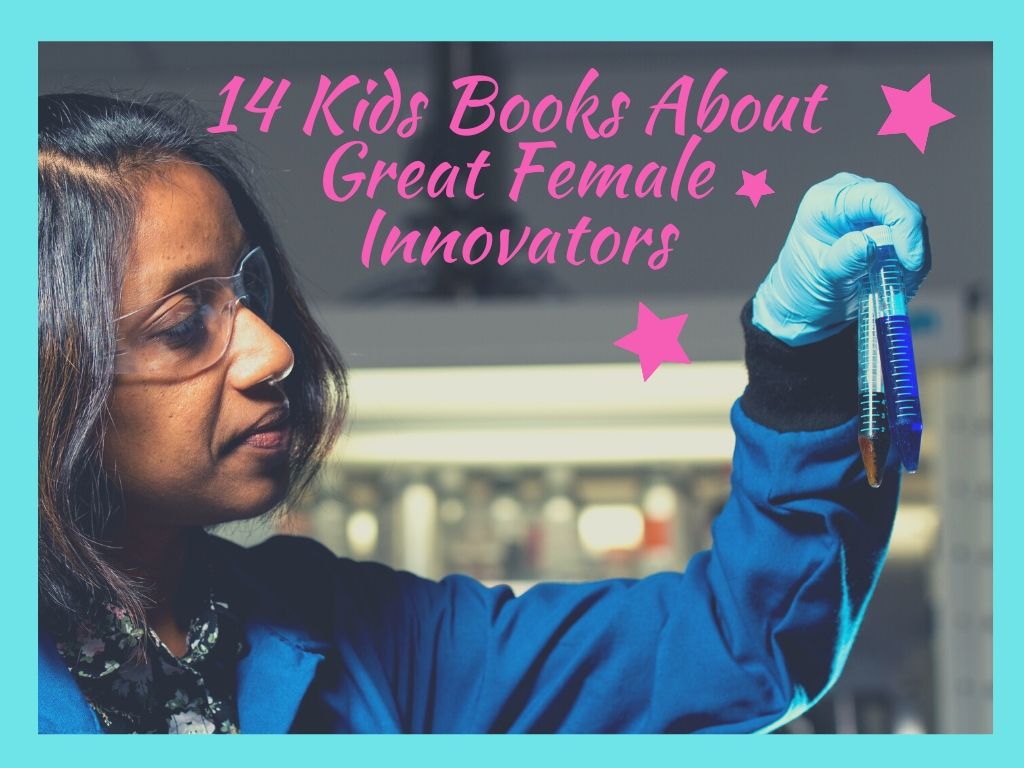 I am so happy to see the amazing books that have become so popular in recent years that highlight the accomplishments of female innovators. There are so many visionary women who have created the path upon which all little girls can follow.  We created a list of 14 books for kids about some of the great female innovators- both fiction and non-fiction.  Obviously, we couldn’t include them all but we hope that this list is a place to start for your own little pioneer to create her own path for others to follow.

Little Dreamers Visionary Women Around the World by Vashti Harrison

Featuring the true stories of 35 women creators, ranging from writers to inventors, artists to scientists, Little Dreamers: Visionary Women Around the World inspires as it educates. Readers will meet trailblazing women like Mary Blair, an American modernist painter who had a major influence on how color was used in early animated films, actor/inventor Hedy Lamarr, environmental activist Wangari Maathai, architect Zaha Hadid, filmmaker Maya Deren, and physicist Chien-Shiung Wu. Some names are known, some are not, but all of the women had a lasting effect on the fields they worked in.

The charming, information-filled full-color spreads show the Dreamers as both accessible and aspirational so readers know they, too, can grow up to do something amazing.

The first woman to win a Nobel Prize, physicist and chemist Marie Curie is the 19th hero in the New York Times bestselling picture book biography series about heroes.

This friendly, fun biography series focuses on the traits that made our heroes great–the traits that kids can aspire to in order to live heroically themselves. Each book tells the story of one of America’s icons in a lively, conversational way that works well for the youngest nonfiction readers and that always includes the hero’s childhood influences. At the back are an excellent timeline and photos.

“Rosie, a Detroit Herstory is a remarkable story for young readers about women workers during World War II. At this time in history, women began working jobs that had previously been performed only by men, such as running family businesses, operating machinery, and working on assembly lines. Across America, women produced everything from ships and tanks, to ammunition and uniforms, in spectacular quantities. Their skill, bravery, tenacity, and spirit became a rallying point of American patriotism and aided in defining Detroit as the Arsenal of Democracy. Even though women workers were invaluable to the war effort, they met with many challenges that their male counterparts never faced. Yet, for all of their struggles, their successes were monumental. Today, we refer to them as “Rosies”-a group of women defined not by the identity of a single riveter but by the collective might of hundreds of thousands of women whose labors helped save the world. More…”

Girls Think of Everything by Catherine Thimmesh

This updated edition of the bestselling Girls Think of Everything, by Sibert-winner Catherine Thimmesh and Caldecott Honor winner Melissa Sweet, retains all the integrity of the original but includes expanded coverage of inventions (and inventors) to better reflect our diverse and technological world.

In kitchens and living rooms, in garages and labs and basements, even in converted chicken coops, women and girls have invented ingenious innovations that have made our lives simpler and better. What inspired these girls, and just how did they turn their ideas into realities?
Retaining reader-tested favorite inventions, this updated edition of the best-selling Girls Think of Everything features seven new chapters that better represent our diverse and increasingly technological world, offering readers stories about inventions that are full of hope and vitality—empowering them to think big, especially in the face of adversity.

Ada Twist’s head is full of questions. Like her classmates Iggy and Rosie—stars of their own New York Times bestselling picture books Iggy Peck, Architect and Rosie Revere, Engineer—Ada has always been endlessly curious. Even when her fact-finding missions and elaborate scientific experiments don’t go as planned, Ada learns the value of thinking her way through problems and continuing to stay curious.

Addy-matic and the Toasterrific is a humorous, rhyming picture book about a girl who attempts to automate a simple task by building a complex, Rube Goldberg-esque chain reaction machine.

Having to wake up early, Adeline (call her Addy, but a warning: just don’t call her in the morning) is not the least bit in the mood to make her own food, so she decides to find a way to automate getting toast made on a plate. Using things around her, she builds a grand creation of perfect automation she calls the effortless Toasterrific!…but will it work?

Young readers will feel empowered by the hero of the story, a young girl, who is faced with a dilemma: “How to automate the task of toasting bread?” Her passion for problem solving compels her to single-handedly design and build an ironically complicated machine called the Toasterrific.

The relevant content of this book is important because it celebrates an imaginative young girl’s love of engineering while echoing the concepts of STEM (Science, Technology, Engineering, Math).

Additionally, in a very straight-forward manner, the book exemplifies how simple machines work and how certain objects meant for one purpose might be used in a completely original way.

Back in the days of long skirts and afternoon teas, young Joan Procter entertained the most unusual party guests: slithery and scaly ones, who turned over teacups and crawled past the crumpets…. While other girls played with dolls, Joan preferred the company of reptiles. She carried her favorite lizard with her everywhere–she even brought a crocodile to school!

When Joan grew older, she became the Curator of Reptiles at the British Museum. She went on to design the Reptile House at the London Zoo, including a home for the rumored-to-be-vicious komodo dragons. There, just like when she was a little girl, Joan hosted children’s tea parties–with her komodo dragon as the guest of honor. More…

She Persisted: 13 Women Who Changed the World by Chelsea Clinton

Throughout American history, there have always been women who have spoken out for what’s right, even when they have to fight to be heard. In early 2017, Senator Elizabeth Warren’s refusal to be silenced in the Senate inspired a spontaneous celebration of women who persevered in the face of adversity. In this book, Chelsea Clinton celebrates thirteen American women who helped shape our country through their tenacity, sometimes through speaking out, sometimes by staying seated, sometimes by captivating an audience. They all certainly persisted.

Amy Guglielmo, Jacqueline Tourville, and Brigette Barrager team up to tell the joyful and unique story of the trailblazing Disney artist Mary Blair.

From her imaginative childhood to her career as an illustrator, designer, and animator for Walt Disney Studios, Mary wouldn’t play by the rules. At a time when studios wanted to hire men and think in black and white, Mary painted twinkling emerald skies, peach giraffes with tangerine spots, and magenta horses that could fly. She painted her world.

You may think you know women’s history pretty well. But have you ever heard of…Alice Ball, the chemist who developed an effective treatment for leprosy—only to have the credit taken by a man?
·  Mary Sherman Morgan, the rocket scientist whose liquid fuel compounds blasted the first U.S. satellite into orbit?
·  Huang Daopo, the inventor whose weaving technology revolutionized textile production in China—centuries before the cotton gin?

Smart women have always been able to achieve amazing things, even when the odds were stacked against them. In Wonder Women, author Sam Maggs tells the stories of the brilliant, brainy, and totally rad women in history who broke barriers as scientists, engineers, mathematicians, adventurers, and inventors. Plus, interviews with real-life women in STEM careers, an extensive bibliography, and a guide to women-centric science and technology organizations—all to show the many ways the geeky girls of today can help to build the future.

The Girl Who Thought in Pictures: The story of Dr. Temple Gandin by Julia Finley Mosca

When young Temple was diagnosed with autism, no one expected her to talk, let alone become one of the most powerful voices in modern science. Yet, the determined visual thinker did just that. Her unique mind allowed her to connect with animals in a special way, helping her invent groundbreaking improvements for farms around the globe!

The Girl Who Thought in Pictures: The Story of Dr. Temple Grandin is the first book in a brand new educational series about the inspirational lives of amazing scientists. In addition to the illustrated rhyming tale, you’ll find a complete biography, fun facts, a colorful timeline of events, and even a note from Temple herself!

A is for Awesome!: 23 Iconic Women Who Changed History by Eva Chen

Why stick with plain old A, B, C when you can have Amelia (Earhart), Malala, Tina (Turner), Ruth (Bader Ginsburg), all the way to eXtraordinary You―and the Zillion of adventures you will go on?

Instagram superstar Eva Chen, author of Juno Valentine and the Magical Shoes, is back with an alphabet board book depicting feminist icons in A Is for Awesome: 23 Iconic Women Who Changed the World, featuring spirited illustrations by Derek Desierto.

Meet Alice Guy-Blaché. She made movies—some of the very first movies, and some of the most exciting! Blow up a pirate ship? Why not? Crawl into a tiger’s cage? Of course! Leap off a bridge onto a real speeding train? It will be easy! Driven by her passion for storytelling, Alice saw a potential for film that others had not seen before, allowing her to develop new narratives, new camera angles, new techniques, and to surprise her audiences again and again. With daring and vision, Alice Guy-Blaché introduced the world to a thrilling frontier of imagination and adventure, and became one of filmmaking’s first and greatest innovators. Mara Rockliff tells the story of a girl who grew up loving stories and became an acclaimed storyteller and an inspiration in her own right.

101 Awesome Women who Changed our World by Julia Adams

Discover the lives of 101 trailblazing women and the remarkable things they achieved.

This beautifully illustrated book is packed with bitesize biographies of activists, leaders, athletes, artists, explorers, and STEM innovators. From the celebrated to the overlooked, these women overcame odds, defied expectations and shattered stereotypes and their stories are sure to inspire young readers and encourage them to dream big.

Previous Post: « Disney Book Adaptations, Disney+, and a Look into Kirsten’s New Den
Next Post: What We Wear to Read »