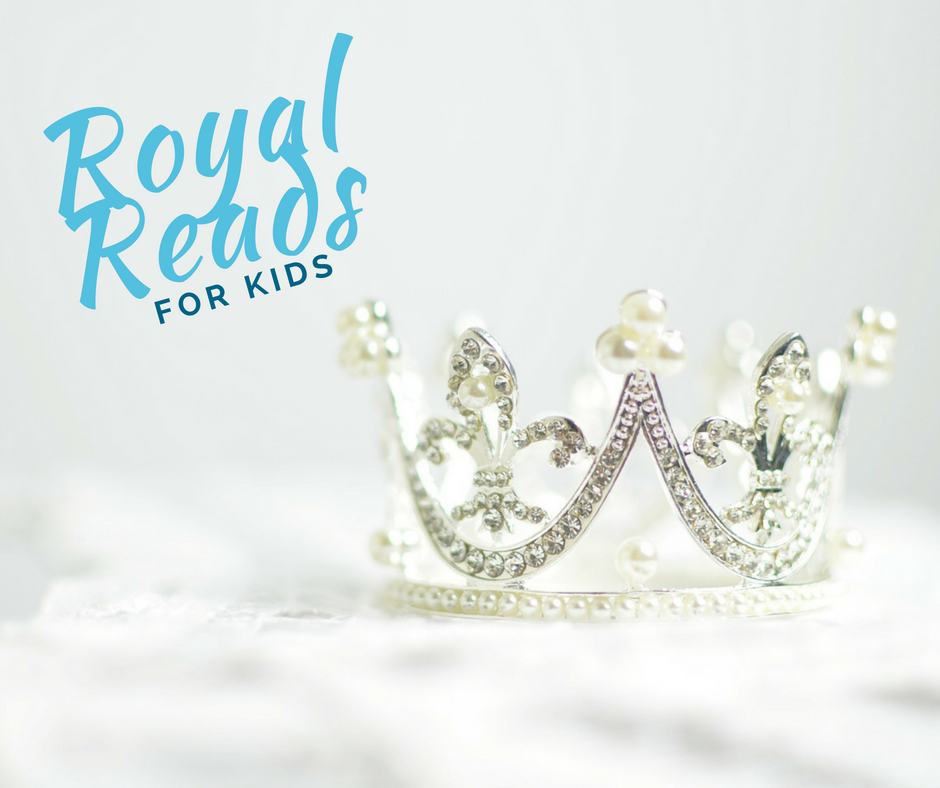 We know how Kirsten feels about her Royals and we are very busy preparing for the upcoming wedding.  So much so, that you would think that we were actually invited.

However, in lieu of going to England for this glorious affair, we have been celebrating here in our own way.  DVR’s are set, tea is a must and fascinators are ready. But, today, we wanted to give you some royal reads for your kids.

After all, the younger you start, the better the chance that they will indulge your obsession when they are older. (Psst. Don’t forget to check out the adult version of this list!)

“News alert! It has just been discovered that there are NO MORE TACOS left anywhere in the world. This is a huge problem because, as you know, dragons love tacos. If only there was a way for the dragons to travel back in time, to before tacos went extinct. Then they could grab lots of tacos and bring them back! It’s the perfect plan, as long as there’s no spicy salsa. You remember what happened last time . . .More”

Rulers of the Playground by Joseph Keufler

“A stunning picture book about sharing, friendship, and kindness in a playground setting from Joseph Kuefler, the author/illustrator of Beyond the Pond. Perfect for fans of Jon Klassen and Oliver Jeffers. More“

Dragon Was Terrible by Kelly  DiPucchio

“We all know dragons are terrible, but this one is especially terrible. He scribbles in books. He steals candy from baby unicorns. He even burps in church. Seriously, who does that? Dragon, that’s who. The king, the knights, and the villagers are desperate to take down this beast once and for all. But sometimes it’s up to the unlikeliest of heroes to tame a dragon this terrible. More“

“Princess Elizabeth is excited to marry dreamy Prince Ronald, but then a dragon attacks the castle, kidnaps her prince, and burns all her clothes. In resourceful and humorous fashion, Elizabeth dons a paper bag, finds and outsmarts the dragon, and rescues Ronald—who is less than pleased at her unprincesslike appearance. What’s a modern-day princess to do? Read this delightful tale to find out. More“

“When Elmer Elevator tells a stray cat about his dream of being able to fly, he learns of a captive dragon on Wild Island. The dragon has been forced by the jungle residents to serve as their shuttle across a wide river — and anyone who rescues the dragon from its cruel captors might be entitled to a free ride. More”

Have you seen my Dragon? by Steve Light

“In the heart of the city, among the taxis and towers, a small boy travels uptown and down, searching for his friend. Readers will certainly spot the glorious beast, plus an array of big-city icons they can count. Is the dragon taking the crosstown bus, or breathing his fiery breath below a busy street? More…“

The 12 Dancing Princesses by Marianna Mayer

“For generations, children have loved the enchanting story of the twelve beautiful princesses and the handsome young lad who solves the mystery of their tattered shoes.

Now Marianna Mayer brings to life all the splendor and romance of this beloved classic, from the dazzling forests Of silver, gold, and diamonds to a twilight palace where the bewitched princesses dance to hypnotic music. And award-winning artist Kinuko Craft add, her own magic: a visual feast of exquisite, jewel-like paintings that sweep across the pages. More…”

“Princess Bess has loads of clothes

made with satin, snaps, and bows.

And she changes them all day,

for her lessons and ballet. More…“

“While her friends and family may not believe in fairies, Geraldine knows, deep down, that she is a VERY fairy princess. From morning to night, Gerry does everything that fairy princesses do: she dresses in her royal attire, practices her flying skills, and she is always on the lookout for problems to solve More…“

The Princess and the Pony by Kate Beaton .

“Princess Pinecone knows exactly what she wants for her birthday this year. A BIG horse. A STRONG horse. A horse fit for a WARRIOR PRINCESS! But when the day arrives, she doesn’t quite get the horse of her dreams…More..“

“Every inquisitive little girl wonders what it is really like to be a genuine princess. At the heart of Do Princesses Wear Hiking Boots? lives an energetic, spirited, and contemporary child who has lots of important questions for her mom. Do princesses ride tricycles, climb trees, do chores, or have to eat the crusts of their bread? More…”

“Few stories are as widely read and as universally cherished by children and adults alike as The Little Prince. Richard Howard’s new translation of the beloved classic–published to commemorate the 100th anniversary of Antoine de Saint-Exupéry’s birth–beautifully reflects Saint-Exupéry’s unique and gifted style. More”

The Knight and the Dragon by Tomie dePaola

“What happens when a sheepish knight and a not-so-fierce dragon fight for the very first time? Well, it’s no ordinary battle since the knight has to go to the castle library to learn about dragon-fighting and the dragon must dig through his ancestor’s things to find out how to fight a knight! More…”

The Bravest Knight by  Mercer Meyer

“I wish I lived a thousand years ago. There would be beautiful castles, kings and queens, good knights, bad knights, fair ladies in danger, evil dragons from the mountains, and a giant troll that roars and eats anything.

What kid hasn’t dreamed of living in fairy-tale times—hasn’t imagined himself as the bravest knight in all the land (or at least the knight’s faithful squire). As he has done in his celebrated There’s a Nightmare in My Closet and its follow-ups, Mercer Mayer brings childhood fantasy hilariously to life here. More“

An intimate guide to the inside of a castle and the lives of its residents, this Stephen Biesty classic details the workings of a medieval fortress.

With intricately detailed cross-sections, each layer of a castle is presented, so readers can explore layer upon layer of castle life including the people, their possessions, and how they lived, as well as how they defended themselves from enemy attacks and settled down for an More…

Over fifteen intricate pop-ups accompany Sabuda and Reinhart’s fascinating text, which guides readers through the different aspects of life in a medieval castle. Readers will learn More..

Year in a Castle by Rachel Combs

Lower the drawbridge! Would you like to know what life was like in a castle long ago? Then come spend the next twelve months in this castle. Check out eight action-packed scenes for a bird’s-eye view of the life and work of lords, ladies, knights, maids, and more. See the castle on market day and during an attack by an enemy lord. Watch knights compete in a tournament. Keep your eye on the calendar too. By spending a whole year in a castle, you can watch events unfold as the seasons change.

Young readers will be spellbound by this story of fierce battles, dark dungeons, secret passageways, and medieval characters made all the more vivid by true tales from experts in the field. Fun facts and photos, including reenactment shots, illuminate the lives of the inhabitants and the fascinating histories of castles.