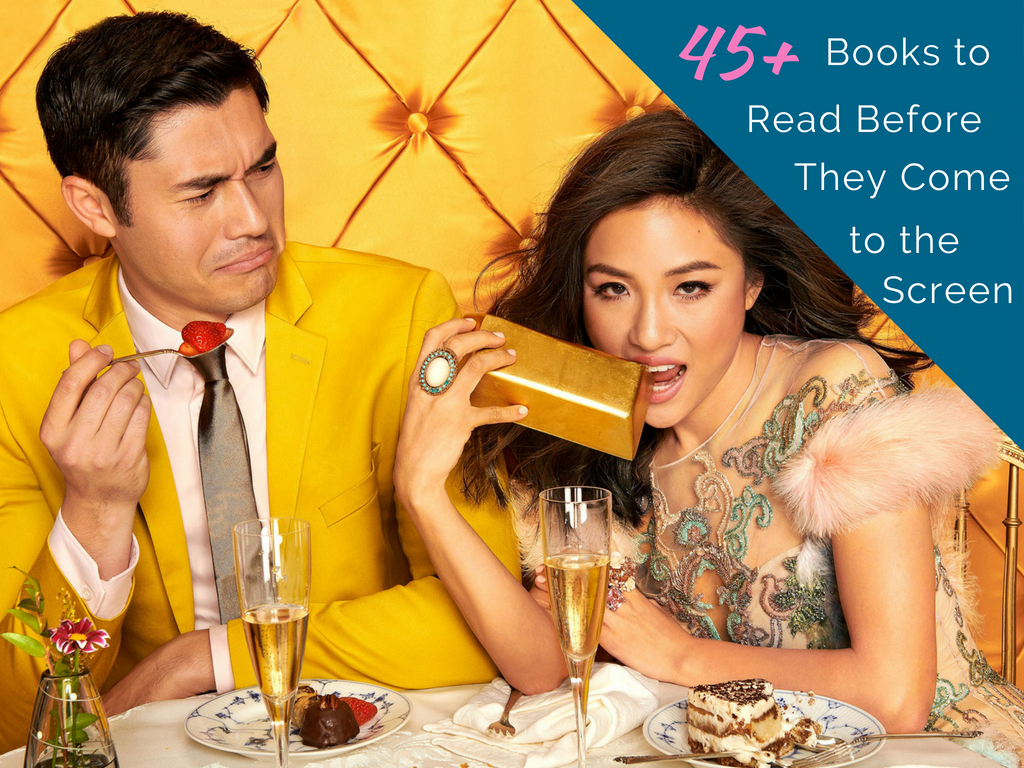 It is not often that I read the same books as my husband. Usually, we can find an audiobook to listen to while we drive somewhere but, it’s in his preferred genre. I knew the Cormoran Strike novels by Robert Galbraith (AKA J.K. Rowling) were coming to Cinemax and I was really excited to watch the adaptation. The tone of the show perfectly mirrored the books and I LOVED it. My husband even liked it too which is a huge bonus for me.  I love a great adaptation.  So, in the hopes of bringing families together, we have a great list of book adaptation for 2018 and beyond. And, if you have been following our book challenge, August is read a book being made into a movie.

This is a story of what happens when the heir to a Chinese fortune brings an American born Chinese girlfriend to the wedding of the season.

The Darkest Minds by Alexander Bracken

This adaptation is based on the first book in a YA trilogy set in the future.  Ruby, played by Amandla Sternberg, has special abilities the government wants to keep hidden. Mandy Moore also stars.

Julianne Moore plays an American Opera singer who travels to South America for a private show. Soon the show is crashed by guerilla forces.

A memoir about a deeply religious boy, who is outed to his family – including his pastor father. Attempting the church’s program to become a heterosexual, instead, he finds himself. The movie stars Nicole Kidman, Russell Crowe, and Joel Edgerton.

After her mother disappears, Bee decides to track her down and has an adventure in the process. Starring Cate Blanchett, Kristen Wiig and  Billy Crudup, this movie is sure to be funny and entertaining.

The Hate U Give by Angie Thomas

One of the most powerful books I’ve read in recent years is slated to be made into a movie. This story is about the Black Lives Matter movement and is set to star Amandla Stenberg, Common, Regina Hall and Kian Lawley.

The Girl in the Spiders Web by Steig Larson

The next installment in the Millenium series has a change of cast with Claire Foy set to play Lisbeth Slander.  Mikael Blomkvist seeks the help of computer hacker Lisbeth Slander as they find themselves caught in a web of cybercriminals, spies, and corrupt government officials.

The Aftermath by Rhidian Brook

Another post-WWII flick, this one takes place in Germany when a British colonel and his wife move in with a German man and his daughter. Keira Knightley, Alexander Skarsgard, and Jason Clarke star.

The Black Hand by Stephan Talty

Leonardo DiCaprio is starring and producing this adaption set in America in the early 20th century. The story focuses on the beginnings of the mafia in the US and the detective looking into their crimes

James Franco is directing and starring in this story about Hollywood in the 70s and 80s. It is starring Seth Rogen, Dave Franco and Megan Fox.

A tale of two French sisters. One who works for the Resistance and one who is forced to host a Nazi soldier in her home. Sam Claflin is rumored to be onboard.

Witness For the Prosecution by Agatha Christie

Another remake of a classic Christie novel. Ben Affleck is set to direct and star in this courtroom drama.

All the Bright Places by Jennifer Niven

Set to star Elle Fanning, this young adult book begins when two teens meet on top of the bell tower at their school.

Love May Fail by Matthew Quick

Emma Stone is slated to play the lead, a woman whose failed marriage has her returning to her hometown in search of an old teacher.

The Silent Wife by A.S.A Harrison

Nicole Kidman is set to star in this movie.  It’s perfect for fans of Gone Girl and Girl on the Train. The story switches perspectives between a husband who cheats and the wife who takes care of him.

This is a memoir about a child lost in the child welfare system for 5 years and the volunteer who tries to help her find her mother so that she can become her legal guardian.  Starring Reese Witherspoon and Amanda Seyfried.

The Bookseller by Cynthia Swanson

This Romance will Star Julia Roberts.  The Bookseller tells the story of a single woman, Kitty Miller, who dreams of marriage and motherhood all while running a bookstore with her best friend, Frieda.

I Heard You Paint Houses by Charles Brandt

Based on the book, The Irishman will depict the life of Frank  Sheeran, a mafia hitman who allegedly murdered American labor union leader Jimmy Hoffa. Martin Scorsese will pair with Robert De Niro.

The Mothers by Brit Bennett

Kerry Washington is attached to this story, which took Instagramby storm earlier in the year. The story unfolds over many years but everything centers around one summer’s choices and lasting consequences.

The Lost Wife by Alyson Richman

A love story that takes place in Prague on the cusp of WWII. The lovers’lives are shattered when the Nazi’s invade their homeland. Daisy Ridley has been cast as the female lead.

This page-turner is perfect for fans of Gone Girl and Girl on the Train!

The Secret by Rhonda Byrne

This self-help book is meant to help people get what they want out of life.  Starring Katie Holmes, it is sure to be a huge hit!

Into the Water by Paula Hawkins

The Sky is Everywhere by Jandy Nelson

17 Year old Lennie is dealing with the aftermath of her sister’s death.  Selena Gomez will star as Lennie

East of Eden by John Steinbeck

Gary Ross will be writing this adaptation and pairing with Jennifer Lawrence who is set to star in this Steinbeck masterpiece.

The Engagements by J. Courtney Sullivan

This book explores relationships through one diamond engagement ring.  Reese Witherspoon will produce this film.

Bryce Dallas Howard will make her editorial debut with this adaptation.

A BBQ goes terribly wrong. This is a story of friendship, parenthood and asking the ultimate question, what if? Starring Nicole Kidman and Reese Witherspoon

The Night Circus by Erin Morgenstern

This well-known book is the quintessential relationship guide. Think of it as a road-map to the opposite sex. Starring Reese Witherspoon.

The Red Queen by Victoria Aveyard

The first in the series, the story takes place in a world that divides people by the color of their blood. Elizabeth Banks will direct this movie.

This is a psychological thriller that takes place during a bachelorette party. Reese Witherspoon will produce.

The relationship between two young Nigerian’s is tested when she moves to America and he has immigration issues.  Lupita Nyong’o will star with David Oyelowo. Brad Pritt will produce.

The Rosie Project by Graeme Simsion

Don Tillman is a professor who decides it is time to find a wife.  He goes about it in a very scientific way.  Ryan Reynolds is set to star.

An Object of Beauty by Steve Martin

Set to star Amy Adams, this is a story about a woman trying to navigate the art world in New York City.

The Game: Penetrating the Secret Society of Pickup Artists by Neil Strauss

Part how-to, part memoir, this book tells the story of how the author infiltrated a secret society of pick-up artists.

To All the Boys I’ve Loved Before by Jenny Han

When Lara Jean’s love letters are mailed out to the boys she has loved, chaos ensues.  This adaptation is for all of us who remember our awkward teenage moments.

The Guernsey Literary and Potato Peel Society by Annie Barrows

Set shortly after WWI, a young writer – played by Lily James – is looking for inspiration for her next novel and finds it on the island of Guernsey. The movie will be on Netflix.

Drums of Autumn by Diana Gabaldon

Claire and Jamie find themselves deciding between going back to Scotland or staying in the American colonies.

My Brilliant Friend by Elena Ferrante

This series is about two rich friends growing up in post-war Italy. The four books in the series tell the story of the 60-year friendship between Elena and Lila after Lila disappears. HBO hopes to have a 32 episode series that will cover all 4 books.

Based on the true story of Grace Marks, a housemaid who was convicted of murdering her employer Thomas Kinnear, his mistress, and his housekeeper. Grace claims to have no memory of the murder. A decade after, Dr. Simon Jordan tries to help Grace recall her past. Starring  Sarah Gadon, Edward Holcroft, Zachary Levi.  See the Trailer.

Who Fears Death by Nnedi Okorafor

This magical realism book takes place is a post-apocalyptic Africa.  With George R. Martin as the executive producer, we can definitely expect some great things.

Looking for Alaska by John Green

Hulu is finalizing plans for turning this book into an 8 part mini-series, 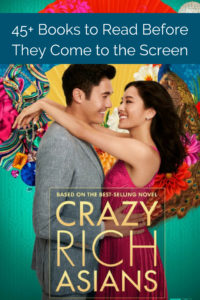